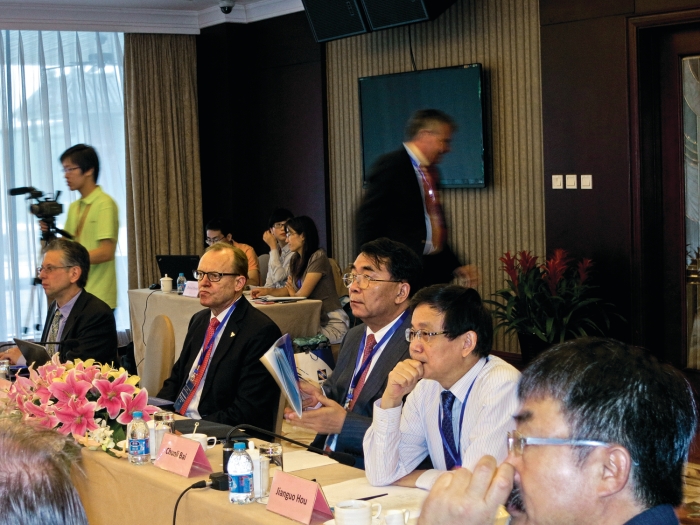 Some of the world’s most pressing problems, such as improving access to drinking water or making solar energy much cheaper, could be made less pressing with the help of nanotechnology. However, rising public concerns over possible ill effects on health and the environment from nanomaterials may hamper advances, scientists said earlier this month at a meeting in Beijing.

The 30 or so scientists had gathered for the first-ever Directors Forum on Nanotechnology, convened by Chunli Bai, a prominent Chinese researcher who heads China’s National Steering Committee for Nanoscience & Technology. The meeting brought together heads of leading nanotechnology research institutes from Europe, Asia, North America, and Australia, just before a major nanotech science conference.

In a passionate presentation at the meeting, Flemming Besenbacher, founder and former director of the Interdisciplinary Nanoscience Center of Denmark’s Aarhus University, said, “Nano can help to solve the real problems that our world faces, such as the food crisis, climate change, water shortages, and health care affordability.” It will be critical in making wind and solar energy more economically viable, he predicted, and it could give rise to new industries employing millions of people.

But nanoscientists may not be able to deliver those benefits because public concerns over unforeseen health and environmental consequences could impede nanotechnology research, warned André Gourdon, leader of CEMES NanoSciences Group, in Toulouse, France. According to a recent opinion survey, the French public is wary of scientists, and nanoscientists are more distrusted than those in other fields, he noted. “The concerns are presently more evident in France and Australia, but it will eventually be a problem everywhere,” he said.

In 2011 in Mexico, an underground group opposed to nanotechnology sent letter bombs to nanotech researchers, injuring several of them.

In France, “new technologies are associated with pollution, unemployment, and invasion of individual freedom,” Gourdon said. As a result, French scientists and the public mutually mistrust each other, he added. To counter researchers’ negative public image, he argued, nanoscientists must make themselves more accessible to the public and start to interact routinely with the media. International collaboration, he added, could help nanoscientists share effective public relations practices.

So far, such international collaboration has been rare, Gourdon noted. In Europe, he said, nanotechnology cooperation has often been limited to working with scientists in other European nations. Yet European funding for nanoscience projects does not usually require all the scientists involved be based in Europe.

At the moment, China may be the country that is most actively promoting international cooperation in nanotechnology. The Directors Forum was held just ahead of the International Conference on Nanoscience & Nanotechnology (ChinaNANO), the fifth scientific meeting in a biennial series.

“ChinaNANO is the biggest conference that I know of in this field,” said Paul S. Weiss, director of the California NanoSystems Institute at the University of California, Los Angeles, and editor-in-chief of ACS Nano. He noted that China is a major contributor to the field of nanotechnology. Although research budgets in China are smaller than in the U.S., “money goes further here,” he told C&EN at the meeting.

Some 3,000 scientists at more than 50 universities and 20 research institutes are involved in nanoscience research in China, noted Bai, who organized the Beijing meeting. “The total citations and number of patents pending filed by Chinese researchers are in second place in the world,” Bai said. It’s an achievement China can be proud of, but papers and numbers of citations are “only one indicator of the value of research.” Much of the research achievements of the Chinese group is “very ordinary,” he noted.

Bai conceived the plan to bring together the heads of prominent nanoscience research centers after visiting them individually, he told C&EN. During the meeting, Bai expressed his hope that the forum could become a regular annual event held ahead of ChinaNANO. Nanoscientists from around the world have common values, he said, and they should meet regularly to understand “social requirements at the global level.”

Although many of its attendees did not know what to expect, the Directors Forum served to highlight a pressing yet overlooked need for cooperation, particularly to enhance public perceptions of nanoscience.

“If we’re not careful, if we’re indifferent, nano—in Europe at least—will be like genetically modified foods: It will not exist; it will be unavailable,” Besenbacher warned. “We need to stand up and point out the benefits as well as the risks.”

Sustainability
US Senate passes sustainable chemistry legislation
Environment
P2 and ADM pair up for renewable products
Recycling
Coca-Cola bottler invests in recycling
Share X
To send an e-mail to multiple recipients, separate e-mail addresses with a comma, semicolon, or both.
Title: Nanotech Leaders Convene In Beijing
Author: Jean-François Tremblay
Chemical & Engineering News will not share your email address with any other person or company.