A Powerful Dot Of Solar Energy 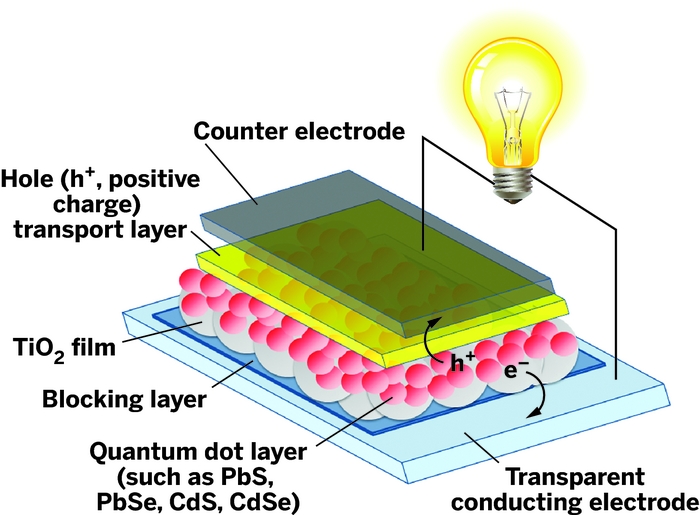 The ongoing supermassive thermo­nuclear explosion that powers the sun emits energy at a mind-boggling rate exceeding 100 trillion trillion watts. At a relatively safe distance from the sun of some 93 million miles, Earth receives just one-billionth of that colossal energy flow. But even that mi­nute fraction, 120,000 terawatts (120,000 trillion W; 1 W equals a joule per second), showers Earth with more energy in one hour than all the energy consumed by humans in an entire year.

That 120,000 TW of free sunlight, compared with our total global energy usage of “just” 13 TW, looks like low-hanging fruit. The tantalizingly abundant supply of non-carbon-emitting energy far exceeds worldwide energy demands, roughly 85% of which are now met by burning fossil fuels. The trick is tapping into that energy source inexpensively.

To meet that challenge, scientists have been searching for ways to make low-cost solar cells—photovoltaic devices that convert light to electricity. Solar-cell technology isn’t new. For decades, top-of-the-line solar cells made from high-purity crystalline silicon have provided electrical power for space vehicles and other high-end applications. But the high cost of the crystal-growth and manufacturing processes prices the technology out of range for wide use.

So researchers are pursuing low-cost solar-cell alternatives. One approach that’s gaining momentum aims to take advantage of the ease of making, tuning, and processing light-absorbing nanocrystals of semiconductors with colloidal chemical methods. Also known as quantum dots, this group of readily synthesized nanocrystals includes metal chalcogenides such as CdS, CdSe, PbS, PbSe, and other materials.

Many scientists in this area gathered at the American Chemical Society national meeting in Indianapolis this month to discuss their latest findings. The topic took center stage in several symposia, including sessions sponsored by the Division of Colloid & Surface Chemistry and the Division of Energy & Fuels. Attendees, along with other researchers, are developing chemical methods for tailoring light absorption, charge mobility, and other properties to enhance the performance of quantum dot solar cells. They are also exploring low-cost techniques for making and using these devices.

How simple is simple? Kamat’s group recently showed that it is not far-fetched to imagine that solar cells can be made, in part, by painting a surface with photovoltaic “ink.” To test that concept, the group prepared solutions of TiO2 nanoparticles coated with CdS and CdSe, painted the solution onto conducting glass, and briefly heated it, making a photo­active electrode. To evaluate the procedure, they incorporated the painted glass into photoelectrochemical cells and found that its efficiency in converting light to electricity was just over 1% (ACS Nano 2012, DOI: 10.1021/nn204381g).

That value isn’t very high. It is slightly more than one-fifth the conversion efficiency obtained from quantum dot cells made via time-consuming, painstaking methods. And it is one-twentieth the efficiency of costly crystalline silicon cells. Kamat points out that the solar paint method was unoptimized and designed as a proof of concept.

Even after optimization, paint-on methods for fabricating photoactive devices may not result in very high conversion efficiency. Nonetheless, as Kamat notes, the low cost of the method may make it attractive for generating power on metal rooftops, shipping containers, and other sun-soaked metal surfaces that can serve as a solar-cell electrode in applications in which typical photovoltaics are too expensive.

The metal chalcogenides and metal oxides Kamat’s group uses to make solar paint are common materials in quantum dot solar-cell studies. Sunlight harvested by the sulfide and selenide nanoparticles generates excitons. An exciton is a high-energy couple in which an energetic electron is bound to a positively charged electron vacancy or hole. To produce electric current, the electron-hole pair must split before the excitation is quenched. That split enables negatively charged electrons to migrate through TiO2 or another metal oxide toward one electrode. Positive holes travel to the other electrode. Overall, the photoinduced excitation and charge-transport processes generate a flow of electric current that can be used as a power source.

Each of the processes, from sunlight in to electricity out, affects a solar cell’s performance. To make inexpensive cells that work well, researchers are trying to understand and control basic steps such as light absorption, photoexcitation, and charge transport.

One way to get more electricity out of a solar cell is to get more light in. A general strategy for increasing the fraction of the solar spectrum absorbed by solar cells calls for using a combination of photo­active materials, each sensitive to a distinct range of wavelengths. Rather than tuning the photoactive response range by making one type of quantum dot in various sizes, which is the standard approach, Kamat’s team fixed the size and varied the composition.

Specifically, they made 4.5-nm CdSeS nanocrystals with a range of Se-to-S ratios and a corresponding range of colors. Quantum dots with the lowest Se content were green and captured the shortest wavelengths. Red dots had the highest Se concentration and absorbed the longest wavelengths. Orange dots fell between the two extremes. Then the group deposited the quantum dots on TiO2—first a layer of green, then orange, then red.

That design yielded roughly 50% higher conversion efficiencies than the sum of the efficiencies of separate cells, each made with just one type of nanoparticle: green, orange, or red. Sequential layering also worked better than depositing a single layer containing a mixture of all three colors (J. Am. Chem. Soc. 2013, DOI: 10.1021/ja310737m). The findings hint that the layering details make a difference and suggest an area for further optimization.

Enhancing the ease of charge transport through solar cells is another route to boosting their performance. Quantifying the transport process in a solar cell is challenging. So University of California, Irvine, chemistry professor Matt Law and coworkers study that process in quantum dot field-effect transistors. His group prepared colloidal PbSe quantum dots, replaced the standard long-chain organic capping ligands with short sulfide units, and infilled the particles with alumina.

Law’s group found that the sulfide-capped alumina/quantum-dot composites are not only outstanding charge carriers but also are chemically stable and resistant to photothermal degradation. In control experiments, the team found that the high charge-mobility level results mainly from two factors: the close spacing of the sulfide-capped particles and alumina’s knack for deactivating surface traps that impede charge transport and reduce current flow (Nano Lett. 2013, DOI: 10.1021/nl304753n).

A related research thrust focuses on capturing the energy imparted to solar cells by photons at the high-energy (violet) end of the solar spectrum. Owing to the physics of photoexcitation, photons with energy exceeding a quantum-dot-specific value impart “excess” energy to solar cells, but some 50% of that is lost as heat, says to Matthew C. Beard of the National Renewable Energy Laboratory. Beard, NREL’s Arthur J. Nozik, and colleagues are trying to reclaim that lost energy with tailored quantum dot cells.

In some cases, an impinging high-energy photon can create more than one electron-hole pair. That multiple excitation, which could provide a route to boosting solar-cell output, is short-lived and challenging to harness. But two years ago Beard and coworkers demonstrated that such multiexcitations can be captured.

Specifically, the team showed that irradiating hydrazine-treated PbSe-based solar cells with light of 400-nm (violet) or shorter wavelengths leads to a quantum efficiency exceeding one, meaning that, on average, more than one electron is generated for each incoming photon (Science 2011, DOI: 10.1126/science.1209845). Now they are trying to see if changes in dot size or composition increase the chances of multiexcitation.

Eray S. Aydil and coworkers are also exploiting the convenience and flexibility of colloidal quantum dot chemistry, but they do so with a twist. The University of Minnesota chemical engineering and materials science professor and his team focus on Earth-abundant, nontoxic materials such as Cu2ZnSnS4 (CZTS). Although the group prepares CZTS as quantum dots, they convert the nanocrystals to large-grain films to improve solar-cell performance.

“CZTS is a promising new material that has generated a lot of interest in just the past few years,” Aydil said. Researchers working with that material and Cu2ZnSnSe4 have made solar cells with 11% conversion efficiencies. But those cells require toxic reagents and complex equipment. Aydil and coworkers have come up with a safer and simpler method, and now they are working to control the process by which CZTS nanocrystals deposited on a substrate morph during heat treatment into large-grain films.

At the ACS meeting, Aydil reported that by adjusting the temperature and duration of the heat treatment, CZTS can be coaxed into diffusing from the nanocrystal film and nucleating into crystals measuring several micrometers, which enhances charge transport. He noted that this “abnormal grain growth” is driven by crystal surface energy and is dependent on the presence and concentration of sodium and other compounds in the substrate.

Solar-cell technology is changing and growing rapidly. It’s tough to predict which technologies will ultimately be big winners. But researchers such as Kamat are enthusiastic about quantum dots’ prospects.

“These materials give us a competitive edge because of their convenience and low cost,” he said. He’s betting the tiny crystals will soon become “the next big thing in photovoltaics.”