[+]Enlarge
Ring-distortion reactions like these four can be used to modify a natural product into diverse complex derivatives. 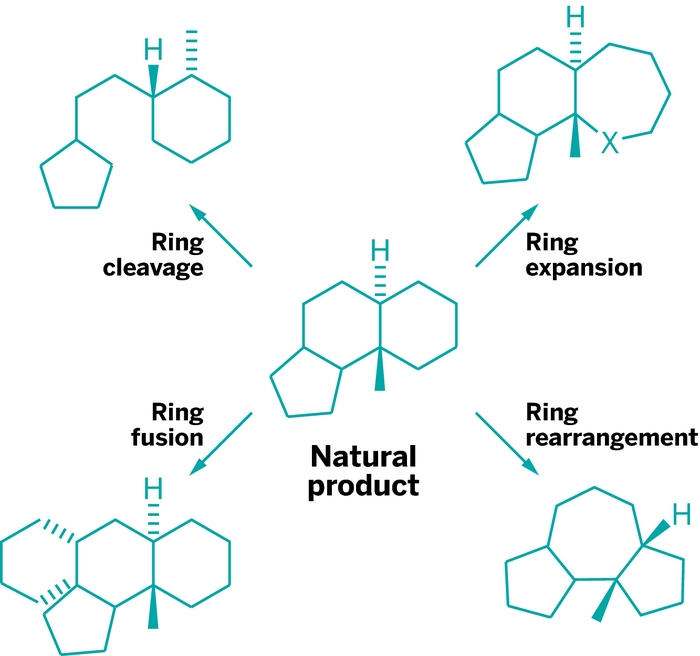 Ring-distortion reactions like these four can be used to modify a natural product into diverse complex derivatives.

Most new drugs are discovered by screening compound collections, or libraries, for worthy candidates. But many such collections consist primarily of molecules that do not possess the structural, stereochemical, and functional complexity equivalent to that of natural products. A new method of constructing natural-product-like compound collections aims to address that deficiency (Nat. Chem., DOI: 10.1038/nchem.1549).

Natural products are among the most promising sources of approved drugs. For example, a recent study found that 41% of anticancer drugs and 65% of antibacterial drugs are natural products or derivatives.

Such statistics make libraries of compounds that share natural products’ structural and functional complexity a high priority for drug discovery. Most such collections have been created by building up natural-product-like compounds from simpler starting materials. Chemist Paul J. Hergenrother and coworkers at the University of Illinois, Urbana-Champaign, instead begin with natural products and tweak their rings and functional groups, the two quintessential elements of their complexity and diversity.

Starting with natural products like gibberellic acid, adrenosterone, and quinine, the team uses a range of ring-modifying processes—such as ring opening, expansion, fusion, and rearrangement—and functional group modifications to create derivatives. Their analysis of the derivatives’ chemical properties shows the ring-modified variants to be much more complex and diverse than compounds in standard screening collections.

“The relative lack of structural diversity in the screening libraries commonly employed by pharmaceutical companies is thought to be a major factor underlying the continuing decline in drug discovery successes,” comments diversity-oriented synthesis expert David R. Spring of Cambridge University. “Although no biological screening is reported in this manuscript, one would expect libraries of compounds of this sort to provide hits against a range of biological targets,” including challenging ones “that are poorly addressed by more traditional libraries.”

Although using natural products as starting materials for library synthesis has been done before, most previous approaches generated diversity “by coupling appendages to an existing, fixed core scaffold,” comments Derek Tan of Memorial Sloan-Kettering Cancer Center, who also works in diversity-oriented synthesis. The new approach “is different in that it modifies the core scaffolds themselves, modulating the three-dimensional orientations of functional groups that can interact with drug targets,” he says. The next step “is to see how these libraries perform in biological screens compared to other totally synthetic natural-product-like libraries.”

Hergenrother says he and his coworkers have begun to screen the new libraries for hits against biological targets and hope to distribute ring-modified natural products to other drug discovery groups.