[+]Enlarge
Credit: Thomas Kuntzleman
Copper: The Statue of Liberty is a commonly known use of element 29. 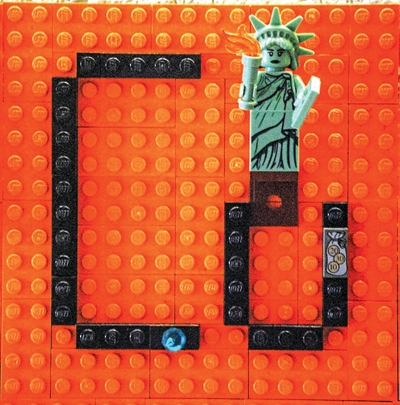 Credit: Thomas Kuntzleman
Copper: The Statue of Liberty is a commonly known use of element 29.

Because National Chemistry Week is on the horizon—it’ll be celebrated Oct. 20–26—the Newscripts gang thought we would share a nifty outreach project from the past.

In 2011, the International Year of Chemistry, chemistry students at Spring Arbor University (SAU), in Michigan, constructed a periodic table entirely out of Legos (J. Chem. Educ. 2013, DOI: 10.1021/ed300849k). But they didn’t do it alone: They had help from a bunch of costumed kids.

Before the outreach event, called Halloween in the Science Lab, SAU students designed templates in Excel for each of the 114 squares that would replicate IUPAC’s official table at the time. Then they placed a copy of the template and the Lego blocks required to construct each square in a plastic sandwich bag. 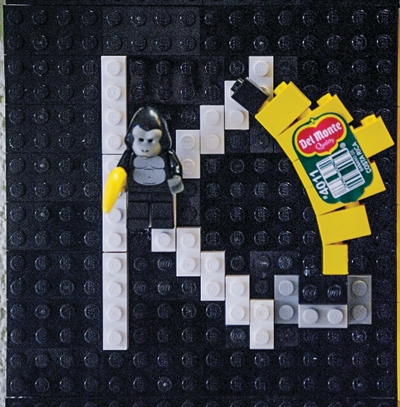 Credit: Thomas Kuntzleman
Bananas: Legos come in all forms, including a potassium-rich food.

On Oct. 26, about 200 costumed visitors, many of whom were children, trick-or-treated at SAU. But rather than taking their “treats” home, they left them behind. The 114-element table was pieced together and, with assistance from Velcro, is on display at SAU.

But the fun didn’t end there. Thomas S. Kuntzleman, an associate chemistry professor, and his students wanted to spruce up the table’s individual tiles with Lego illustrations of how each element is used. So they solicited help from Kuntzleman’s sister, high school chemistry teacher Deborah K. Sayers. With the help of her Advanced Placement chemistry class at Hardin Valley Academy, in Knoxville, the entire table is now illustrated. Potassium, for instance is adorned by a banana and a monkey.

The entire project is available as an interactive periodic table at http://bit.ly/17TMB0U, complete with equations and fun facts about each element.

Having mastered atoms in their elemental form, organic chemistry student Alexis Peterson found herself overwhelmed earlier this semester when she was tasked with memorizing molecular functional groups. To help herself learn them, she used a traditional method with a fashionable twist: She converted her fingernails into flash cards. 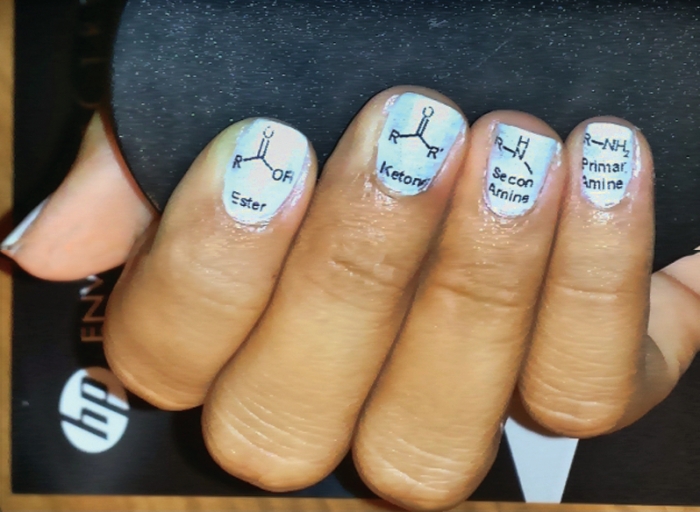 According to Peterson, a sophomore at Chaminade University of Honolulu, a trend called “newspaper nails” gave her the inspiration. Newspaper nails are exactly as they sound—newspaper print worn as nail polish.

To prepare for her functional manicure, Peterson found labeled images of functional groups online, shrunk the structures and type so they would fit on her nails, printed the files on paper, and cut them out. She then painted her nails with white nail polish and placed one group on each nail. Applying rubbing alcohol to the back of the paper releases the ink onto the nail—polar alcohol functional groups hard at work. To lock the ink in place, she applied a final clear coat of polish to her nails.

“I reapplied the functional groups until I learned them and then I replaced them with new groups,” Peterson says. “The nails chipped off a week before our first exam, but of course I would have removed them.” Needless to say, she nailed the test.

Peterson found she could study nearly anywhere, any time. “A girl casually looking down at her nails isn’t suspicious,” she says. “They are easy to study on the bus or while waiting for class.” What do Peterson’s friends think of her nail art? Nerdy, but cool.

Profiles
Periodic table cross-stitch, a geologically inspired skirt, and a bathroom floor that rocks
Periodic Table
Constructing the periodic table from thread and yarn
Periodic Table
Meet the 'I Spy a Periodic Table' Readers’ Choice winner
Share X
To send an e-mail to multiple recipients, separate e-mail addresses with a comma, semicolon, or both.
Title: Elemental Legos, Functional Fingernails
Author: Emily Bones
Chemical & Engineering News will not share your email address with any other person or company.