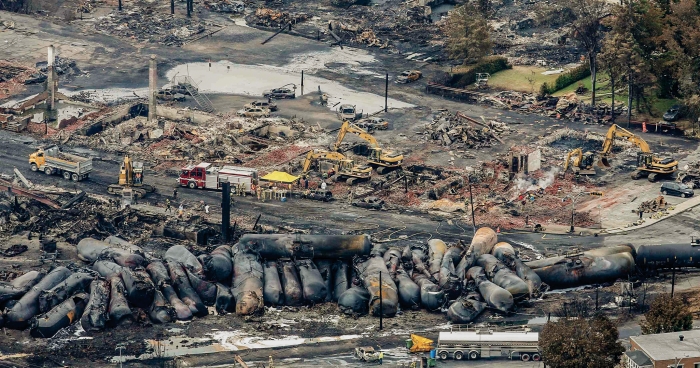 Credit: Mathieu Belanger/Reuters/Newscom
The damage caused by the crash of a runaway crude oil freight train in Quebec last July was catastrophic.

The horrific train accident that occurred in Quebec in July has prompted the U.S. Department of Transportation’s Pipeline & Hazardous Materials Safety Administration (PHMSA) to take the first step toward boosting safety standards for newly built railroad tank cars and the thousands of older cars currently in use. Special focus is on upgrading the cars so that they are less prone to rupture during a derailment, federal regulators say.

The agency is considering a plan to fix a design defect in the so-called DOT-111 tank car, a stainless steel model used throughout North America to haul a variety of hazardous and nonhazardous materials, including crude oil and ethanol. Of the 310,000 tank cars in the U.S. fleet, 240,000 are DOT-111s. Each car carries up to 30,000 gal of liquid.

It’s the type of car that was carrying crude oil on July 6 when a Montreal, Maine & Atlantic Railway freight train derailed and exploded in Lac-Megantic, Quebec, a small town of 6,000 residents located about 150 miles east of Montreal.

The unattended 72-car train was parked overnight when it broke loose and began rolling down a 7-mile incline before careening off the tracks in the downtown area. Multiple tank cars exploded, setting off a massive blaze that engulfed more than four blocks of the town. Forty-seven people were killed. It was the deadliest North American rail disaster in decades.

The soda-can-shaped DOT-111 railcars have repeatedly come under scrutiny by transportation officials because of their tendency to split open during derailments. Since 1991, the National Transportation Safety Board (NTSB) has raised concerns several times about the car’s structure, including its relatively thin metal skin and the possibility that cars could rip holes in each other during accidents, potentially spilling cargo that could catch fire, explode, or contaminate the environment.

“During a number of accident investigations over a period of years, NTSB has noted that DOT-111 tank cars have a high incidence of tank failures during accidents,” board Acting Chairman Deborah A. P. Hersman said in a March 2012 letter to PHMSA recommending that the cars be either strengthened or replaced.

NTSB, which can only suggest to other agencies changes to regulations, called for thicker, more puncture-resistant tank car shells; extra protective shields at the ends of each car; and additional protection for the nozzles, pipes, valves, and other exposed fittings on the top of the cars.

If retrofits are not possible, then the use of DOT-111s for transporting hazardous materials should be phased out, Hersman said. They could still be used to carry nonflammable liquids such as corn oil or canola oil.

In a notice issued on Sept. 6, PHMSA said it would weigh NTSB’s recommendations along with a proposal by the freight railroad industry that focuses on safety standards for new tank cars constructed for ethanol and crude oil service. A final rule isn’t expected until at least next year.

“Now is the time to make sure safety regulations are robust enough for the increased hazmat movement on our rails, roads, and in our pipelines,” says PHMSA Administrator Cynthia L. Quarterman.

Surging oil production from shale rock formations in regions that do not have pipelines has led to a dramatic increase in petroleum rail traffic. Freight trains hauled 234,000 carloads of crude oil last year, up from just 9,500 carloads in 2008, according to the Association of American Railroads (AAR), the industry’s main trade group.

And U.S. ethanol production has also soared in recent years in response to federal mandates that seek to lessen dependence on imported foreign oil. Ethanol rail traffic jumped from 77,000 carloads in 2005 to nearly 342,000 in 2011 before dropping to 311,000 carloads last year. Ethanol is now the highest-volume hazardous material shipped by rail.

The industry group acted after safety investigators concluded that flaws in the car’s design likely worsened the damage caused by a 2009 derailment in Illinois. In that accident, a Canadian National freight train carrying 2 million gal of ethanol went off the tracks and sparked a massive blaze in Cherry Valley, a suburb of Rockford. A woman waiting at a nearby railroad crossing was killed and 11 others were injured, making it the nation’s worst ethanol tanker accident.

Thirteen of the train’s 15 derailed cars ripped open, illustrating the “continued inability of DOT-111 tank cars to withstand the forces of accidents,” NTSB said in its report on the incident.

AAR has also petitioned PHMSA to adopt higher federal standards “to improve the ability of tank cars to survive an accident without release of hazardous materials.” The industry’s proposal, though, would require thicker steel for the car shell, rollover protection devices, and other safety modifications for new tank cars only.

Citing costs and engineering challenges, railroads and shippers say it would be impractical if not impossible to retrofit the older portion of the fleet, about 40,000 DOT-111 general service tank cars built before October 2011, that is currently used to transport crude oil, ethanol, and other flammable liquids.

It could cost more than $1 billion to make safety improvements to existing cars, according to AAR. “By comparison, derailment costs totaled approximately $64 million over the past five years,” the group says in its petition to PHMSA.

The rail industry also touts its strong safety record on hazardous cargo, stating that more than 99.99% of all shipments arrive at their destination without incident. Overall, the number of accidents involving the release of hazardous materials has fallen by 16% during the past decade, according to the Federal Railroad Administration, which is part of the Department of Transportation.

At a two-day meeting at the end of August, federal railroad regulators took public testimony about possible changes in safety rules for hazmat shipping. Cheryl A. Burke, Dow Chemical’s global program director of transportation safety and security, told the panel that her company—the largest bulk chemical shipper in the U.S.—supports efforts to make railcars sturdier.

She noted that Dow has worked in recent years with the transportation industry to develop a new generation of specially designed pressurized railcars to help minimize the risk of transporting chlorine, a highly toxic gas. But it’s unrealistic to think that tank cars will ever be “completely impervious to the substantial forces that occur in significant rail accidents, particularly high-speed derailments,” Burke testified.

In the Lac-Megantic derailment, Canadian investigators have determined that the train was moving in excess of 60 mph when it jumped the tracks. It’s far from clear whether a more puncture-resistant tank car could have withstood the smashup of a train barreling downhill and leaping the tracks at such a high speed.

“The fact that some [DOT-111] tank cars have not survived in some major derailments is not an indication that they are inherently flawed,” Burke asserted. “The significant increase in the number of shipments of certain commodities making it more likely that these cars will be involved in a derailment does not also make the tank car design inherently flawed. The first line of defense is preventing the accident.”

Any regulatory proposal to retrofit existing fleets, she added, should begin with a full evaluation of the risks, costs, and benefits, including consideration of the characteristics of the materials being transported and the types of accidents and their root causes.

At the meeting, critics contended that given the 30-year life span of rail tank cars, the entire existing fleet must be made more crashworthy to protect the public. Federal regulators, railroads, and hazmat shippers have known for more than two decades that the DOT-111 has “a high propensity to rupture in derailment scenarios,” Karen Darch, mayor of Barrington, Ill., and cochair of a Chicago-area rail safety advocacy coalition, noted at the meeting.

“Industry needs to face the fact that its insistence on using the existing DOT-111s without a retrofit to transport hazardous materials shows a willful and wanton disregard” for public safety, Darch charged. Although many causal factors were involved in the Lac-Megantic derailment, “tank cars with the propensity to rupture are, quite literally, at the heart of the tragedy,” she said.

Although a retrofit program will be costly and could involve some short-term disruptions in the rail transport of certain hazardous materials, Darch said federal regulators and industry “need to take a deep breath and do what’s right now before another tragedy occurs.”