[+]Enlarge
Credit: Genentech/Roche
Kadcyla is an antibody-drug conjugate in which the cytotoxin mertansine (blue) is linked to the monoclonal antibody trastuzumab (green), which binds to the HER2 receptor on cancer cells (brown), as shown in this rendering. 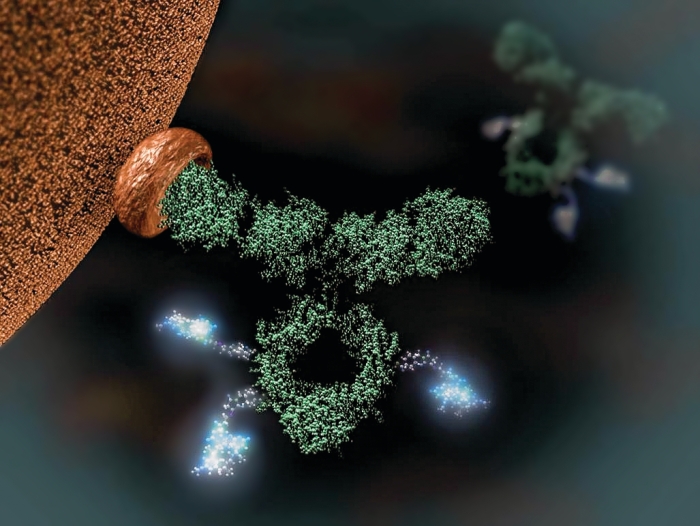 Credit: Genentech/Roche
Kadcyla is an antibody-drug conjugate in which the cytotoxin mertansine (blue) is linked to the monoclonal antibody trastuzumab (green), which binds to the HER2 receptor on cancer cells (brown), as shown in this rendering.

Only two antibody-drug conjugates are on the market—Roche’s Kadcyla for breast cancer and Seattle Genetics’s Adcetris for lymphoma—but developers are stepping up investment in this new drug class. ADCs promise side-effect-free therapies by linking potent cytotoxins to monoclonal antibodies to deliver a killing agent directly to tumor cells.

Combined sales of Adcetris, approved in 2011, and Kadcyla, approved last year, reached $160 million in the first half of 2013. Even though most other ADCs are still in the early stages of development, the market could grow to $9 billion by 2023, according to the London-based market research firm Roots Analysis.

To support Kadcyla and another eight ADCs in development, Roche will spend about $207 million to build an ADC production facility in Basel, Switzerland. The new plant is part of a larger investment by the company in biologics manufacturing (see page 17).

AstraZeneca’s biopharmaceutical arm, MedImmune, will spend $200 million up front and up to $240 million in milestone payments to acquire Spirogen, a 13-year-old cytotoxin developer based in London. MedImmune will separately invest $20 million in Switzerland’s ADC Therapeutics and collaborate on developing two ADCs.

With the exception of deep-pocketed firms such as Roche, drug companies developing ADCs are dependent on contract manufacturers, Roots Analysis notes. Only a limited number of contract manufacturers can develop linkers and cytotoxins, and even fewer provide conjugation services, the research firm says.

Likewise, Carbogen Amcis said last month that it will spend about $4 million on an ADC facility in Bubendorf, Switzerland, and nearly $1 million to upgrade a sterile manufacturing area at its site in Riom, France, for making ADCs. The company just finished upgrading chromatography capabilities in Bubendorf and added a kilogram-scale lab in Bavla, India, for potent compounds.

In July, Piramal Healthcare said it will invest $2.5 million to upgrade commercial-scale ADC production in Grangemouth, Scotland. And earlier this year, Switzerland’s Lonza began doubling its commercial ADC capacity through a $15 million investment in Visp, Switzerland. ADCs represent one of the fastest-growing segments of the biotech industry, the company says.