Respect for mass spectrometry’s capabilities has spread from physics, to chemistry, to biology 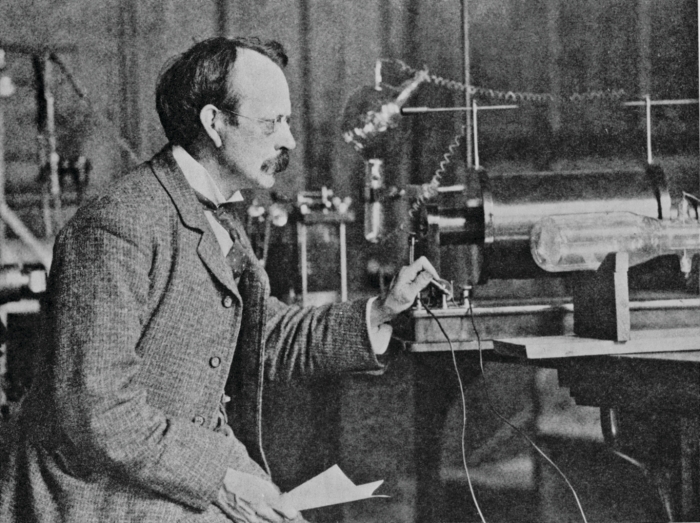 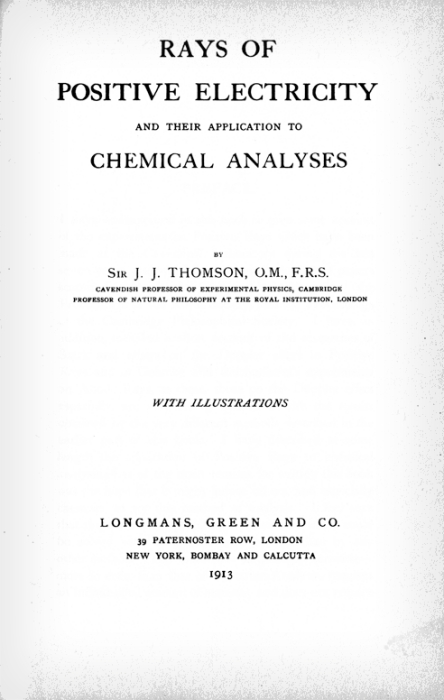 With this book, Thomson (top) tried to bring mass spectrometry to the attention of chemists.

In October 1913, Sir Joseph John Thomson published “Rays of Positive Electricity and Their Application to Chemical Analyses.” A symposium at the American Chemical Society fall national meeting last month in Indianapolis celebrated Thomson’s landmark book and the century of research that followed it.

But Catherine E. Costello, a professor of biochemistry and director of the mass spectrometry resource at Boston University School of Medicine, thinks the actual starting date is less important than recognizing the existence of 100-plus years of mass spectrometric history.

“You go to meetings these days, and a large fraction of the people there think nothing happened before MALDI and electrospray,” Costello said. Matrix-assisted laser desorption/ionization and electrospray, invented in the 1980s, extended mass spectrometry to large biological molecules. “Telling them there’s 100 years of history is good.”

“Rays of Positive Electricity” is particularly notable for trying to attract chemists to mass spectrometry. In the preface to the first edition, Thomson wrote, “I have described at some length the application of Positive Rays to chemical analysis; one of the main reasons for writing this book was the hope that it might induce others, and especially chemists, to try this method of analysis. I feel sure that there are many problems in Chemistry which could be solved with far greater ease by this than by any other method.”

Thomson was “essentially pleading for chemists to use this really neat tool that gives you one of the most fundamental pieces of information you could have about a molecule—its mass,” said Michael A. Grayson, the archivist for the American Society for Mass Spectrometry. Grayson helped organize the ACS symposium and another historical session held in June at the ASMS annual meeting.

Chemists didn’t particularly exhibit interest in mass spectrometry at first, “but physicists adopted the tool with gusto,” Grayson said. The technique influenced them “to begin a serious exploration of the periodic chart and learn of the existence of isotopes of the elements and their relative abundances.”

Mass spectrometry made the jump from physics to chemistry when the petroleum industry recognized the tool’s ability to determine chemical compositions. The company that gets much of the credit for that, and for the first commercial mass spectrometer, is Consolidated Engineering Corp.

Herbert C. Hoover Jr., son of the U.S. president, founded CEC in 1937 to produce instruments for oil exploration. “There was this suspicion that if you found hydrocarbons in soil, you would be able to use that as a possible tool to explore for oil,” Grayson said. Hoover “felt that the mass spectrometer provided the sensitivity to look for hydrocarbons in soil. It turned out that it didn’t work. Hydrocarbons in soil at that level are ubiquitous and don’t really tell you anything about the presence of oil deep in the earth.”

But instead of scrapping the instrument when it failed to detect oil reserves, Hoover contacted a friend at a petroleum company and invited him to send samples of gas mixtures for analysis. Not only was the instrument able to analyze the alkanes expected to be present in the samples, but it also detected the acetone that had been used to clean the gas bulbs used to send samples to CEC.

“Within a very short period of time, just about every petroleum refining site with significant activity bought these mass spectrometers from CEC,” Grayson said. “It was basically a niche technique because it only worked as an analytical tool for simple gas mixtures, which is exactly what the petroleum industry wanted.”

World War II served as another spur for chemists to adopt mass spectrometry. For example, mass spectrometers were used in the Manhattan Project to separate and enrich isotopes of uranium.

During the war, the U.S. also needed to expand production of synthetic rubber when the Japanese cut off access to Malaysian rubber, Sparkman said. Mass spec was needed to determine the correct ratio of components. But petroleum companies hesitated to buy CEC’s instrument because CEC required them to share any technology they developed using the instrument so that it could share that technology with other users. As an emergency war measure, the U.S. government handed CEC’s patents over to Westinghouse and asked it to build instruments and supply them to chemical companies under contract to the U.S. government. 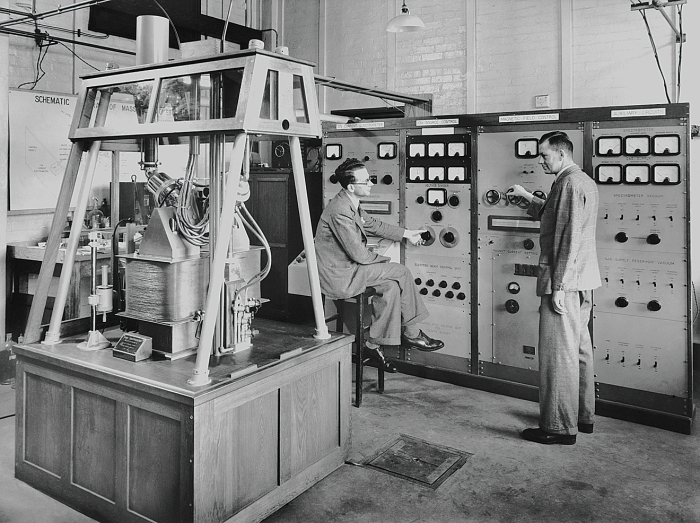 Since then, the capabilities of mass spectrometric instruments have steadily improved. For instance, the ability to do multiple sequential stages of mass analysis was key to being able to analyze complex mixtures. In the 1970s, R. Graham Cooks, a chemistry professor at Purdue University, developed a technique that was then called mass-analyzed ion kinetic energy spectrometry, or MIKES. The technique allowed ions from one stage of mass analysis to be selected and analyzed in a second stage.

At the time, “it was an uphill struggle to get the mass spec community to recognize the value of looking at mixtures with two stages of mass analysis,” Cooks said. But that type of approach is routine today.

Much mixture analysis involves chromatographic separation before mass analysis. Cooks said he takes the “extremist view” that such separations shouldn’t be necessary. Instead of preseparating mixtures, they can be ionized and the ions separated in a mass analyzer. Fragmentation and multiple stages of mass analysis can then be used to characterize the ions. Such a pure mass spec approach “has been the theme of my whole career,” Cooks said.

TOF was the first type of mass analyzer that did not use a magnetic field to separate ions. The origins of TOF can be pegged to an abstract published in 1946 by William E. Stephens of the University of Pennsylvania, said Kenneth G. Standing, an emeritus professor of physics at the University of Manitoba. It subsequently became popular for its speed and simplicity.

The introduction in the 1970s of the quadrupole mass analyzer, which had better mass resolution, seemed to sound the death knell for TOF mass analyzers. “By the mid-1970s, most people in the community considered mass analyzers based on the TOF concept to be completely forgotten and useless, never to be heard from again,” noted Grayson in a historical poster at ASMS.

But several developments pulled TOF back from the brink. For example, a TOF technology called reflectron geometry improved the instruments’ mass-resolving power. And hybrid instruments combining TOF with other mass analyzers were introduced.

But the most important contribution to the resurgence of TOF was the invention of MALDI in the late 1980s. MALDI “was particularly suitable for TOF measurements and was probably the most important innovation that led to the present popularity of TOF,” Standing said.

MALDI and another soft ionization technique, electrospray, have played major roles in another transition within mass spectrometry—the move to biological applications.

As soon as researchers began to understand that information on the structure and activity of organic molecules could be obtained from their mass spectra, “mass spectrometry started getting involved in biological sciences,” Costello said. The first classes of biological compounds that were analyzed in detail mass spectrometrically “were simple things like amino acids, steroids, lipids.”

In the early days of biological mass spectrometry, researchers were restricted to small, volatile molecules. The ability to analyze large biomolecules such as proteins, carbohydrates, and nucleic acids came with ionization techniques like plasma desorption, developed in the 1970s, and fast-atom bombardment, developed in the early 1980s. Later methods such as MALDI furthered this ability.

Applications of mass spectrometry in biology continue to expand today. In future years, mass spectrometry “will be used by a broader and broader range of people in different disciplines,” not necessarily just by mass spectrometrists, Costello said. The technique should continue to grow in popularity as “Rays of Positive Electricity and Their Application to Chemical Analyses” becomes an increasingly distant memory.

Analytical Chemistry
As the triple quadrupole turns 40, mass spec gurus look back on what it’s meant to chemistry
People
Nakanishi Prize
Analytical Chemistry
A Major Award For Mass Spec
Share X
To send an e-mail to multiple recipients, separate e-mail addresses with a comma, semicolon, or both.
Title: Mass Spec’s Century Of Change
Author: Celia Henry Arnaud
Chemical & Engineering News will not share your email address with any other person or company.