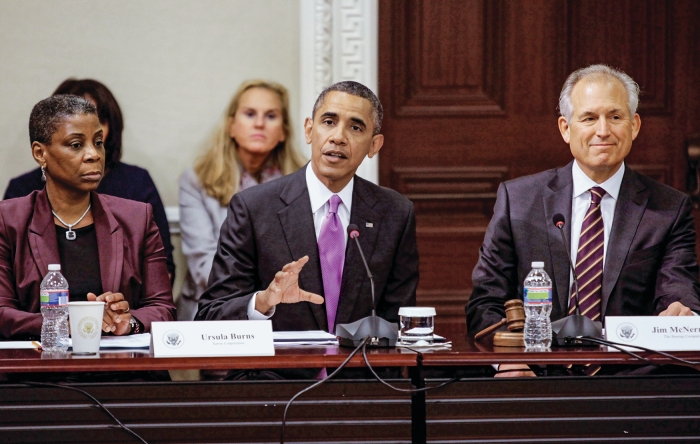 Credit: Polaris/Newscom
Obama speaks with members of his Export Council at the White House last month.

As part of a broad business coalition, chemical manufacturers are urging the Obama Administration and Congress to work together to pass legislation that would help ease the way for two new free-trade deals. The chemical industry, which accounts for nearly 12% of total U.S. exports, views the agreements as opportunities to boost economic growth. But not all lawmakers agree that such legislation is needed.

One of the two pending trade deals is with the European Union. In July, the U.S. and the EU began negotiating what could be the biggest bilateral trade agreement in history. The two sides hope to reach at least a preliminary agreement by November 2014. The pact, formally known as the Transatlantic Trade & Investment Partnership, could generate $2 billion in export growth in the chemical industry alone, according to the American Chemistry Council (ACC), an industry trade association.

For the second agreement, the Administration hopes to wrap up talks with Australia, Japan, Singapore, and eight other countries by the end of December to create a massive Pacific Rim free-trade zone. According to an analysis by ACC, the Trans-Pacific Partnership could generate an additional $1.2 billion in export growth in the U.S. chemical sector.

To get those agreements finalized and approved by Congress, chemical industry trade associations and other business groups are working to build support among lawmakers to reinstitute a presidential mechanism called trade promotion authority. Every president since Richard Nixon has had this negotiating power, but Congress allowed it to lapse in 2007.

Also known as fast-track authority, the procedure allows the White House to negotiate trade agreements with foreign governments that Congress then must either approve or reject without making any changes. Proponents say the streamlined process can help assure trading partners that commitments made by U.S. negotiators won’t unravel when the agreements reach Congress.

“Trade promotion authority gives our trading partners the confidence in the U.S. to put their best offers on the table,” says Linda Menghetti Dempsey, vice president of international economic affairs at the National Association of Manufacturers, the largest U.S. industrial trade group.

Trade promotion authority legislation “procedurally lays out how these agreements will move from the President through Congress and be implemented,” says Justine Freisleben, manager of government relations at the Society of Chemical Manufacturers & Affiliates, which represents specialty chemical makers. Having a simple up-or-down vote with no amendments also provides “the best chance for congressional passage, especially given the current environment” on Capitol Hill, she notes.

President Barack Obama, who set a goal to double U.S. exports from 2008 levels by next year, has expressed hope that a bill renewing the authority would garner support among lawmakers.

To complete the blockbuster deals with the EU and Pacific Rim nations, “we’re going to need trade promotion authority,” Obama declared last month during a meeting of the President’s Export Council, an advisory committee of government officials and corporate leaders.

At the Sept. 19 meeting, U.S. Trade Representative Michael Froman said the Administration’s chief goal in both the EU and Asia-Pacific talks is to open new markets for U.S. exports and establish new rules for the global trading system.

“None of this can happen without trade promotion authority,” Froman said. He added that the Administration is working with congressional leaders on a bipartisan bill.

However, many members of Obama’s own party oppose trade promotion authority. Congress last renewed the authority in 2002. Republicans, who generally favor free trade, passed the bill over the objections of Democrats, many of whom blame past trade agreements for U.S. job losses.

“Congress shouldn’t simply grant the Administration fast-track authority,” says Rep. Rosa L. DeLauro (D-Conn.). “Twentieth-century fast track is simply not appropriate for a 21st-century agreement like the Trans-Pacific Partnership.” That proposed pact “is a broad stroke and goes beyond traditional trade matters,” she says, noting that it also covers areas such as food safety, the environment, and patent law.

“I think the President has a strong bipartisan majority in Congress on most trade issues,” says John Engler, president of the Business Roundtable, a group of top corporate chief executive officers.