A man’s brain being removed and cut into hundreds of pieces to be handed out all around the world—without his family’s knowledge—might seem like the plot line of a Halloween horror movie.

This particular tale isn’t fiction, though. After performing an autopsy on famed physicist Albert Einstein in 1955, a pathologist named Thomas S. Harvey photographed the scientist’s brain, shared slices of it with fellow pathologists, and asked for permission after the fact. Even more strange, Harvey kept pictures of the dissected brain and pieces of it for himself. Only after the pathologist’s death in 2007 were the items eventually unearthed and given to the National Museum of Health & Medicine, in Silver Spring, Md.

Weiwei Men, lead author and Einstein fan, developed an image analysis technique to measure the thickness of the corpus callosum, a bundle of nerve fibers that help the brain’s hemispheres communicate. The team, which included evolutionary anthropologist Dean Falk of Florida State University, applied this method to the photos of the inside of Einstein’s brain taken after Harvey split it in half. The researchers also analyzed magnetic resonance images of the brains of young and old men for comparison: The former group averaged 27 years old, close to the age Einstein was when he derived his most important theories, and the latter group averaged 74 years old, nearly the age Einstein was when he died.

“It turns out Einstein was more connected than anyone,” Falk tells Newscripts. The physicist’s corpus callosum was thicker than the subjects’ in most of its regions.

Whether or not highly connected hemispheres means higher intelligence still needs to be proven, Falk says. “But I think it’s an extremely reasonable, testable hypothesis.”

One person who would ask, if not downright demand, that his brain be preserved and studied is Sheldon Cooper, the socially inept, narcissistic physicist played by Jim Parsons on CBS’s “ The Big Bang Theory.” 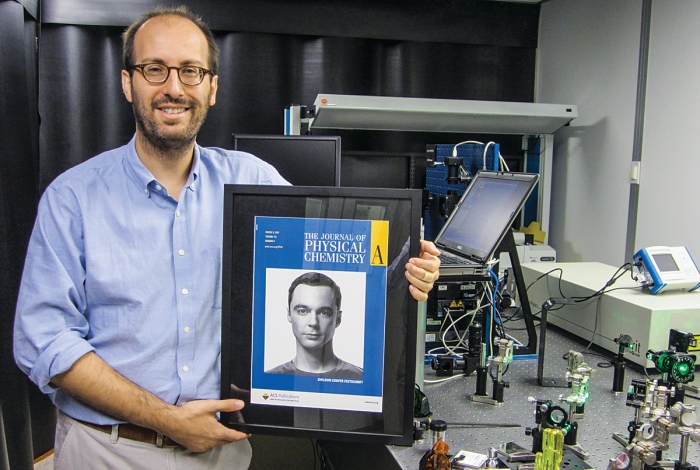 The Newscripts gang occasionally watches the television show and recently spotted the American Chemical Society’s Journal of Physical Chemistry A in the background with Cooper’s mug on the cover. Admittedly, we’re a bit behind the times: The poster first graced the walls of Cooper’s office in an episode that aired in January 2012. But we’ve tracked down the story on how it got there.

While watching a “Big Bang” episode in 2011, University of Maryland, College Park, chemistry professor John T. Fourkas—a senior editor at JPC—spotted a poster for a competing journal on the fictional lunchroom wall of Cooper’s university. “It occurred to me that we should do something about this,” Fourkas recalls. So he put his head together with Joseph Graham, assistant director of product marketing for ACS Publications, to design the journal cover, which Fourkas then passed along to his former graduate student Tommaso Baldacchini.

Baldacchini is a scientist for Newport Corp., an optics and laser company in Irvine, Calif., that sometimes provides props to “Big Bang.” He pitched the cover to the show’s props manager and the rest, as they say, is history.

When asked why a theoretical physicist might be featured on the cover of JPC A, Fourkas points out the faux journal was envisioned as a Festschrift, or tribute issue. “Maybe Sheldon came up with a theory about the formation of the elements,” Baldacchini jokes.