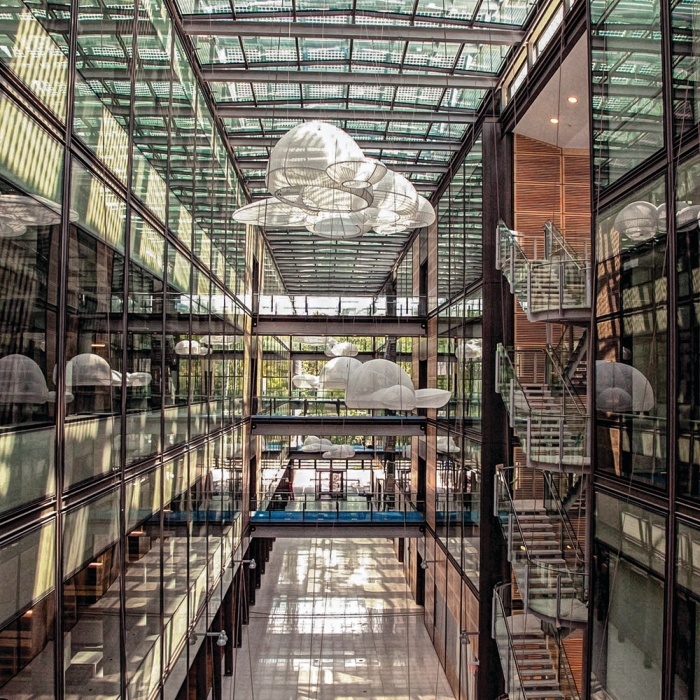 Princeton University’s Frick Chemistry Laboratory is a 265,000-sq-ft cathedral for chemistry featuring a soaring atrium and teaching labs that can accommodate up to 140 students at a time. The university paid for the lab, which opened in 2011, with $278 million of the royalties it has received from Eli Lilly & Co. for the mesothelioma drug Alimta.

The royalties are commercial profits, contends a small group of property tax payers from the town of Princeton, N.J. They have sued in the Tax Court of New Jersey, challenging the university’s nonprofit tax status and demanding that it pay its share of property taxes. And real estate could just be the wedge; the broader implication of the case is that if the university loses, it could be liable for income taxes as well.

The taxpayer group won round one at the end of June, when the judge overseeing the case decided that the challenge to the university’s nonprofit status deserved a hearing, which is planned for late next year.

Attorney Bruce Afran, who represents the taxpayer group, says Princeton acts like a for-profit entity by making money on its patents and sharing proceeds with faculty inventors. The school is “enriching faculty while causing residents to pay at least one-third more in taxes” than they would if the school paid its fair share, he contends.

Robert K. Durkee, the university’s vice president and secretary, responds that he doesn’t expect the residents to succeed in challenging the school’s tax status. “We don’t believe there is any merit to attempts to relate royalty payments to property tax exemption,” Durkee tells C&EN.

Like so many universities, Princeton began to actively patent inventions after 1980, the year Congress passed the Bayh-Dole Act. The law encouraged universities to patent, license, and transfer the technology of federally funded inventions, which were largely unused under federal ownership. In 2012 alone, U.S. institutions of higher learning received $2.6 billion from their patent activity, according to the Association of University Technology Managers.

Princeton is among a select group of educational institutions that have turned faculty inventions into major income streams. Northwestern University brought in more licensing income—$192 million—than any other institution in the technology manager association’s most recent detailed ranking of universities, which was for 2011. The survey put the University of California system and Columbia University next in line, with incomes of $182 million and $146 million, respectively.

Princeton came in fifth place with $115 million in 2011 patent royalties. For that year, the university reports, it distributed $35 million of its royalty income to faculty inventors.

According to the university, most of its royalty income comes from Alimta, which was invented by now-emeritus chemistry professor Edward C. Taylor. He spent years working with Lilly to develop the drug. Approved by the Food & Drug Administration in 2004, Alimta had sales last year of $2.6 billion, 11% of the drug company’s revenues.

Intellectual property experts are watching the case with interest. Under the Bayh-Dole Act, “universities are obligated to commercialize inventions and pay inventors if they take federal research funds,” says Joseph P. Allen, who worked to write and pass the act as a staffer of then-Sen. Birch Bayh (D-Ind.). Even with this incentive, the chances of faculty making sizable incomes from their research are small, says Allen, who now runs his own technology transfer advisory firm. “If you talk to any university, the odds of hitting an Alimta are very rare.”

Walter Valdivia, a fellow at Brookings Institution, a public policy research group, backs Allen up. Valdivia says that “123 out of 208 universities I’ve surveyed don’t even make enough money to cover costs for operating their offices of technology transfer.”

In Allen’s view, because Princeton and other universities are not actually making new products but are licensing products to others, they are not engaged in commerce and hence maintain their nonprofit status. The argument between the university and local residents, he says, appears to be centered on New Jersey property-tax law.

Moreover, the federal government has continued to recognize the nonprofit status of universities through the more than 30 years during which the Bayh-Dole Act has been the law of the land, Allen points out. As long as universities direct income from licensing to benefit the public through their educational and research mission, he doesn’t think their nonprofit status will be in jeopardy.

Valdivia, on the other hand, says he is surprised that no one before now has challenged the profit-making activities of nonprofit educational and research institutions. In his view, institutions that put too great an emphasis on their patent and licensing activity could run afoul of the traditional public service mission defined for them.

Valdivia notes that some schools have set up independent “arm’s length” technology transfer offices to shelter themselves from legal attack. He points to the Wisconsin Alumni Research Foundation, which commercializes technology developed at the University of Wisconsin, Madison, as one example. Princeton’s Office of Technology Licensing is a unit of the university.

The case is complicated, Valdivia says. He speculates that the university “may have to pay a price” for not keeping its patent activities separate from its educational mission. When it comes, Valdivia says, a decision could influence how other universities organize their patent offices.