[+]Enlarge
Credit: J. Am. Chem. Soc.
A thiol and amine mixture at room temperature dissolves at least nine semiconductors, a finding that could lower processing costs for thin-film applications. 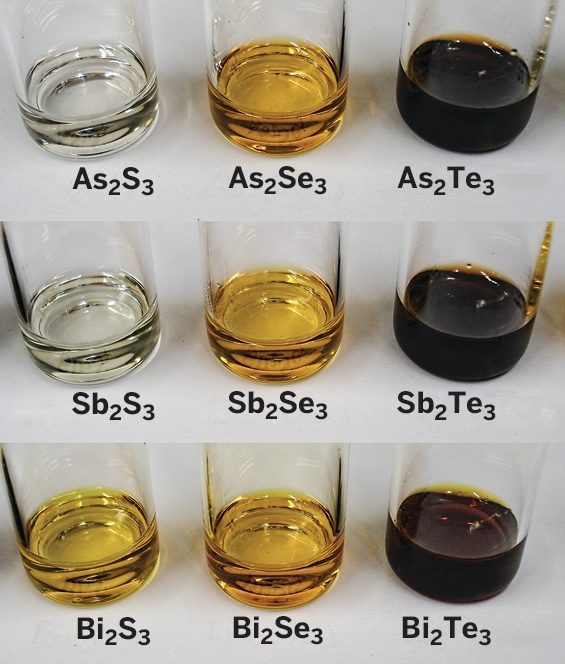 Credit: J. Am. Chem. Soc.
A thiol and amine mixture at room temperature dissolves at least nine semiconductors, a finding that could lower processing costs for thin-film applications.

Semiconductors, thanks to their controllable and highly customizable electronic properties, function as control centers in most of today’s high-tech devices. Typically, these devices are manufactured via expensive and energy-consuming vacuum deposition methods.

Solution-phase processing—simply and inexpensively spraying a thin film of semiconductors, for instance, instead of using a complex vacuum-based process to deposit them—would be a major improvement. But nearly all solvents are ineffective at dissolving semiconductors. The most effective one, hydrazine, is toxic and highly explosive.

Specifically, the team finds that at room temperature and under ambient pressure, a mixture of 1,2-ethyl­enediamine and 1,2-ethanedithiol can rapidly dissolve bulk samples of nine metal chalcogenides—binary semiconductors with the general formula V2VI3, where V represents arsenic, antimony, or bismuth and VI represents sulfur, selenium, or tellurium.

Webber and Brutchey found that the mixed solvent could be used to make highly concentrated (21–32% by weight) solutions of several metal chalcogenides, including As2S3, As2Se3, As2Te3, Sb2S3, Sb2Se3, and Sb2Te3. The solution concentrations of the other compounds they studied, Bi2S3, Bi2Se3, and Bi2Te3, fell in the roughly 1–10-wt% range.

In an initial test of the solvent’s usefulness for processing semiconductors, the team prepared thin films of Sb2Se3 and Bi2S3 by spin coating the liquids on a support material and rapidly heating to evaporate the solvent. On the basis of X-ray, microscopy, and spectroscopy analyses, the group reports that the method yields high-quality, contaminant-free crystalline films.

“These are exciting results in thin-film formation for a number of important semiconductors,” especially because the method does not use hydrazine, says University of California, Davis, chemist Susan M. Kauzlarich. These findings, she adds, may be useful for other semiconductors.

Ionic Liquids
Chemistry in Pictures: Papa’s got a brand new solvent
Materials
Fluorescent materials are the brightest ever made
Biomaterials
Fruit’s metallic blue caused by lipid nanostructures
Share X
To send an e-mail to multiple recipients, separate e-mail addresses with a comma, semicolon, or both.
Title: Semiconductor Solution
Author: Mitch Jacoby
Chemical & Engineering News will not share your email address with any other person or company.