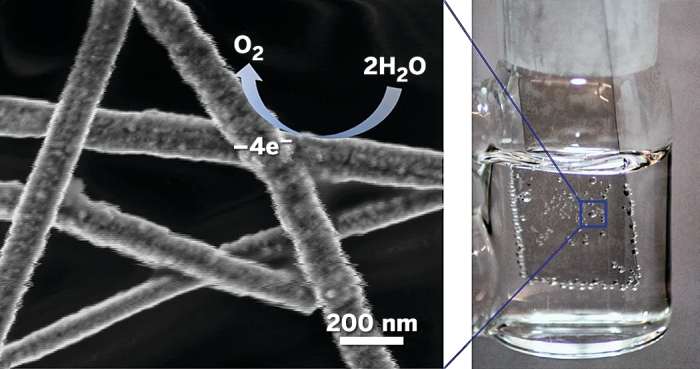 If scientists can figure out how to tap the power of the sun to convert cheap, abundant resources to valuable fuels such as hydrogen, and do so in an inexpensive and sustainable way, they will have taken a big step toward solving the world’s energy problems.

The potential payoff is driving a worldwide effort to find a practical light-driven way to split water and extract hydrogen, an environmentally friendly fuel. The problem has not yet been solved. But the development by researchers at Duke University of a low-cost, transparent water-splitting catalyst now moves the field closer to its goal.

Hydrogen can be liberated from water by several means. Some processes are energy demanding, such as electrolysis. And some require platinum and other costly materials. In one potentially low-cost method, sunlight enters a specially designed cell and triggers a multistep electrochemical process that begins with water oxidation on a catalyst surface. That reaction produces O2 and frees electrons and protons, which can be combined to yield H2.

These photoelectrochemical cells often depend on indium tin oxide (ITO), a transparent, electrically conductive material, coated with a catalytic metal oxide. Because of its ability to serve as a transparent electrode, ITO is the go-to material for various photoelectrochemical processes—not just making H2—and other applications. But indium and ITO are expensive. In addition, the catalytic oxide layer reduces ITO’s light transmission and thus cell efficiency, and its conductivity falls with extended use.

Initial tests show that a mesh of this inexpensive, transparent, conductive material exhibits sustained water oxidation activity comparable to that of metal oxide films, but transmits nearly seven times more light. In addition, the material can be deposited on glass or plastic substrates via simple liquid-phase methods, which may lead to new types of robust, flexible photoelectrochemical cells and other devices.

Brown University catalysis specialist Andrew A. Peterson notes that keeping the copper core in its reduced metallic form under oxidizing conditions will be challenging. “Nonetheless, this is an interesting direction,” he says.

Renewables
Ammonia on route to fuel ships and planes
Energy Storage
SK and and Nobel laureate John Goodenough to work on batteries
Biofuels
3-D–printable material purifies biogas at low cost
Share X
To send an e-mail to multiple recipients, separate e-mail addresses with a comma, semicolon, or both.
Title: Making Hydrogen
Author: Mitch Jacoby
Chemical & Engineering News will not share your email address with any other person or company.