Cranberries Branch Out From Holiday Condiment To The Medicine Cabinet 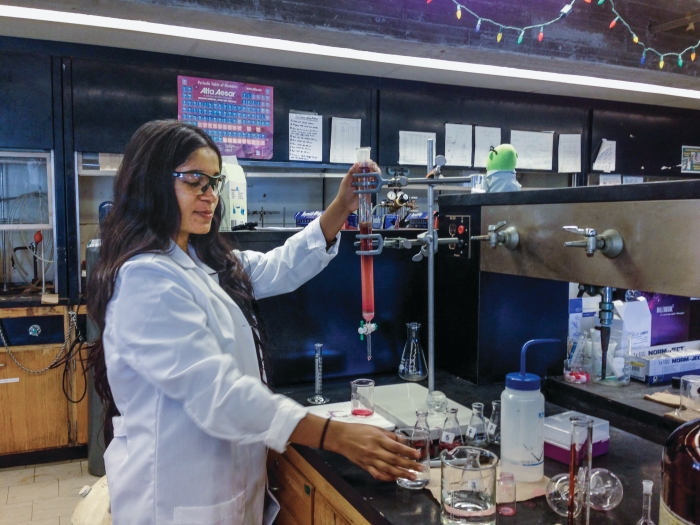 The cranberry side dish of choice on Catherine C. Neto’s Thanksgiving menu is a chutney she describes as “wicked good.” She confesses to not being much of a cook—her sister makes the chutney—but that hasn’t stopped her from acquiring a chest freezer packed with the tart red berries.

Neto’s cranberry freezer isn’t in her garage or basement though. It’s in her lab in the department of chemistry and biochemistry at the University of Massachusetts, Dartmouth. Opening the freezer reveals plastic bags packed with berries nestled next to centrifuge tubes containing cranberry powder the color of Pepto-Bismol. At a nearby lab bench, a student uses column chromatography to separate the berry’s phytochemical components, her column awash in shades of red and pink.

For the past dozen years, Neto, a natural products chemist by training, has been trying to pin down the precise chemistry that gives cranberries a reputation as a healthy food. The Pilgrims used them to prevent scurvy, finding little else in the New World that packed so much vitamin C. And cranberries have long been prized in folk medicine for their ability to keep urinary tract infections at bay. 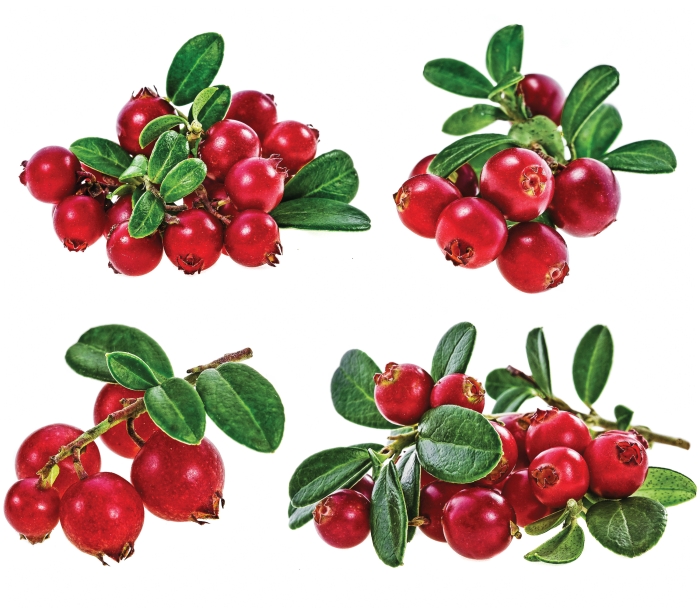 But Neto says the cranberry contains compounds that may also provide protection from certain cancers, cardiovascular diseases, pathogenic fungal infection, diabetes, and other diseases related to oxidative stress and inflammation, such as Alzheimer’s disease, Parkinson’s disease, and stroke.

Two years ago, Neto and her colleague Maolin Guo, also a professor in the chemistry and biochemistry department, established the Cranberry Health Research Center at UMass Dartmouth. The center’s aim is to bring together researchers, particularly in Massachusetts, who are studying the cranberry’s effects on human health.

Cranberries are big business in Massachusetts. Growers in the state pulled in nearly $100 million last year, according to the Department of Agriculture’s National Agricultural Statistics Service. But the cranberry market has soured recently. Production has outpaced demand, driving down prices. The hope is that Neto, Guo, and other scientists will find some validity to cranberry’s health claims, boosting demand for the fruit and its extracts. 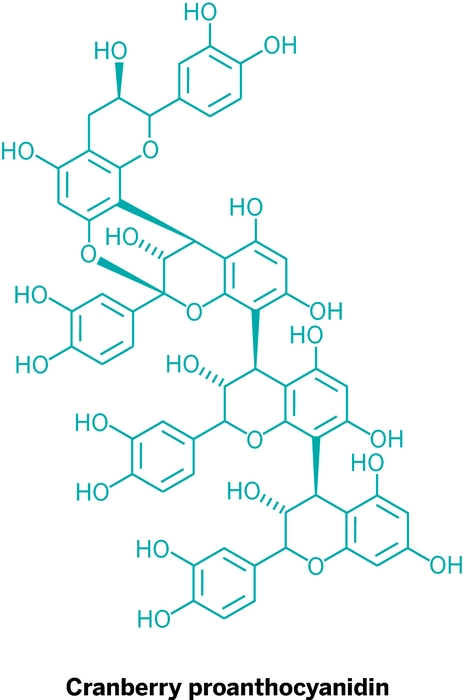 As functional foods go, cranberries are unique, Neto notes. There are at least 150 phytochemicals in them, including proanthocyanidin antioxidants, colorful flavonols, and steroidlike ursolic acid. “We want to establish the science to support the health benefits of the cranberry, whether it’s antioxidant activity, anticancer activity, or antimicrobial activity,” she says.

Despite the fruit’s healthful reputation, little is understood about the chemistry, Guo adds. “As far as the molecular mechanism of action goes, people really don’t have much of a clue,” he says. To that end, both researchers have been working to understand which cranberry components are the most important, which diseases they can potentially guard against, and how they work on a molecular level.

Starting back in 2001, Neto’s group began isolating compounds from cranberry extracts to see how the individual components behaved in tests with cells. At first she looked at antioxidant properties. Later her team set out to study the phytochemicals’ ability to fight cancer cells.

The results have been promising. Several compounds, including polyphenolic proanthocyanidins and flavonoids such as quercetin, have been implicated as capable of preventing cancer cell growth, inducing cancer cell death, and reducing oxidative stress. Neto says the next step is to move into animal studies to see whether these phytochemicals have cancer-preventing effects in living animals, such as zebrafish and mice.

Neto has also set up a collaboration with Terri A. Camesano, a chemical engineering professor at Worcester Polytechnic Institute, to look into the cranberry’s bacteria-fighting power. The researchers have been trying to tease out the different types of antibacterial molecules in cranberries and cranberry juice and how each of those molecules affects bacterial adhesion and biofilm formation, explains Camesano, who studies how bacteria adhere to different surfaces.

In addition to preventing various strains of Escherichia coli from adhering to cells that line the urinary tract, Camesano’s group has found that cranberries are effective at keeping Staphylococcus aureus from sticking to different types of surfaces. “Cranberry seems to be very broad acting,” she says.

Meanwhile, Guo wants to understand how cranberries work on the molecular level. A native of China, Guo says he never encountered cranberries growing up. “I first drank cranberry juice when I was doing a postdoc in California in the early 2000s,” he recalls. “Now I drink it almost every day.”

Guo thinks the key to cranberry chemicals’ purported power is their ability to chelate iron. “When you look at cranberry phytochemicals, immediately the number of polyphenols is very striking,” he says. These polyphenols, he believes, could sequester excess iron in the body. Although iron is an essential element, too much can catalyze the production of hydroxyl radicals, which are harmful. “Iron overload is associated with a lot of diseases,” he says.

If certain cranberry phytochemicals modulate iron physiologically, Guo says, that could account for many of the attributed health benefits. Reducing iron-catalyzed radical production could provide protection against oxidative stress, he adds. Guo’s group found that quercetin, as well as other phenolic compounds found in cranberries, is capable of binding iron and can modulate iron biochemistry under physiologically relevant conditions.

Homing in on the mechanisms that underlie the cranberry’s purported health benefits has been a priority for the cranberry industry, Neto says. But the research is not without controversy. Although the National Institutes of Health has sponsored some studies on the health effects of cranberries, much of the funding comes from producers such as Ocean Spray, cranberry advocacy groups such as the Cranberry Institute, and states such as Massachusetts where the cranberry is an important crop.

Despite the promising benefits, there are cranberry critics. Some point out that sugar typically needs to be added to cranberries to make them palatable. Martin Starr, science adviser at the Cranberry Institute and a member of the Cranberry Health Research Center’s advisory board, concedes this point. “No one is going to eat cranberries out of hand like strawberries,” he says.

Even so, Starr notes, “the level of sugar that gets added to cranberry products is comparable to the natural level of sugar in many other fruits and berries.” Looking at juice bottle labels reveals that 8 oz of a popular brand of cranberry juice cocktail has 120 calories and 30 grams of sugars. The same amount of orange juice contains 110 calories and 22 grams of sugars.

Other critics wonder whether the effects of cranberry compounds observed in lab studies with cells translate to people. Ruth Jepson, a senior research fellow at the University of Edinburgh, in Scotland, recently reviewed 24 clinical studies on the ability of cranberry products, such as juice and supplements, to prevent urinary tract infections.

In terms of prevention, she says, “at best there might be a small effect, but it’s only for women who have recurrent urinary tract infections.” Furthermore, Jepson notes, studies indicate that the active components of cranberry juice last in the body for only about 10 hours before they’re metabolized. “For a woman to prevent one urinary tract infection over the course of one or two years, she would have to drink two glasses of cranberry juice a day.” Getting the maximum benefit seems to be a substantial commitment in terms of consumption and calories, she notes.

Jepson says cranberry-based supplements might offer a less onerous alternative, but so far there’s no evidence that these are effective at preventing urinary tract infections. It’s possible, she says, that the process of creating the supplement deactivates the critical cranberry chemicals or that there just aren’t enough of these compounds in the supplements to begin with.

It’s tough to say, Jepson notes, because no studies with cranberry supplements have specified the amount of active ingredient used. This area, she says, is ripe for further study.