Experts say a variety of disposal methods will be needed 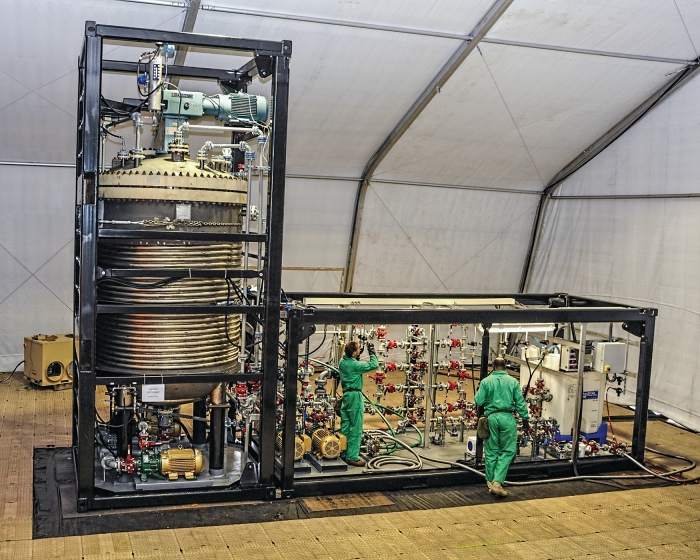 Faced with the threat of a U.S. military intervention, Syrian President Bashar al-Assad agreed in September to a U.S.-Russia plan to destroy his sizable chemical weapons program. Work began quickly, and within two months Syria’s ability to produce new chemical weapons has been eliminated and its stockpile of toxic warfare agents is locked down, international inspectors say.

But arms control experts caution that a more difficult job remains: the destruction in the midst of a brutal civil war of nearly 1,300 metric tons of declared chemical weapons at multiple sites dispersed throughout the country. Equipment to destroy nerve agents, likely including sarin and VX, would have to be brought in, whereas precursor chemicals may need to be transported to other countries for disposal.

“Because this is a war zone and the chemical weapons are not in one place, this is an incredibly challenging task,” says Nancy B. Jackson, an expert in chemical weapons threat reduction and a past-president of the American Chemical Society. “This is going to be a big effort that will require a range of approaches,” she remarks.

The September agreement, subsequently endorsed by the United Nation’s Security Council, required Syria to sign the Chemical Weapons Convention of 1993, the international treaty that bans the production, storage, and use of chemical warfare agents. The Syrian government also agreed to meet a series of deadlines that will lead to the total elimination of its arsenal of weapons and the chemical ingredients used to make them by mid-2014.

So far, Syria has been cooperative, according to the Organisation for the Prohibition of Chemical Weapons (OPCW), which oversees the chemical arms treaty from its headquarters in The Hague. Last month, the Assad regime submitted a confidential inventory of its chemical armaments and production facilities, along with a proposal for destroying its weapons stockpile.

OPCW’s 41-member executive council was scheduled to meet on Nov. 15, after C&EN press time, to discuss Syria’s disarmament plan and to adopt a schedule for destruction of the chemical weapons.

Most of the details of Syria’s stockpile and infrastructure have not been released. But OPCW says it has verified the presence of 1,290 metric tons of chemical warfare agents stored at 23 locations. There were also approximately 1,230 unfilled chemical munitions.

OPCW says that, as of now, Syria’s equipment for producing chemical agents and loading them into munitions, such as artillery shells and rockets, has been destroyed. The organization also says Syria’s entire declared chemical weapons arsenal has been placed under “tamper proof” seal to prevent it from being used or stolen.

“What is important is that Syria no longer has the ability to manufacture large amounts of chemical agents without restoring its production base,” says Ralf Trapp, a chemist and independent consultant in France who previously served as secretary of OPCW’s scientific advisory board. The main challenge now, he says, is the destruction of the most dangerous parts of the stockpile—any filled munitions or “live” chemical agents stored in bulk, such as mustard gas, sarin, and VX.

Weapons specialists say that any filled, battlefield-ready munitions—of which Syria is believed to have a small number—could be disposed of on-site in explosive destruction systems (EDS), commonly known as bang boxes. The technology was developed by scientists at Sandia National Laboratories in the mid-1990s and has been used extensively by the U.S. Army to destroy old munitions.

In this process, the chemical-bearing munitions are placed in a heavy, sealed steel vessel and detonated. A reagent is then pumped into the chamber to neutralize the chemical agent. The residue can be incinerated or treated, similar to sewage water.

“In this kind of situation, an EDS is really the only way to get rid of the whole munition,” Jackson says. “It has been used a lot and is very effective.” She also notes that the system is highly mobile, having been designed to be transported to wherever old munitions are found.

Experts, however, believe that most of Syria’s arsenal consists of precursor chemicals that can be used to create different types of warfare agents. The Syrian military’s operating procedure has been to mix the precursors and fill the munitions shortly before launch, says Paul F. Walker, director of environmental security and sustainability at Green Cross International, an environmental group.

“It’s my understanding that Syria has stored its chemical weapons arsenal in precursor chemical form, thereby mitigating the risks of having live chemical agents in the stockpile and also better preserving the chemicals,” Walker says.

Chemical agents that have not been loaded into weapons are simpler to deal with. For instance, Jackson says mustard gas is best destroyed through incineration at very high temperatures to destroy the toxicity of the ingredients, which include chlorine and sulfur and sometimes nitrogen.

“In the U.S., when we incinerate mustard, we have to have really great scrubbers, because chlorine and sulfur gases are released in the process,” Jackson remarks.

On the other hand, sarin can be neutralized chemically by treating it with water and a caustic compound such as sodium hydroxide, which will cause it to decompose, Jackson says. “It can react quite quickly,” she notes.

Jackson points out that the Department of Defense unveiled the Field Deployable Hydrolysis System in June, which could be used to destroy any sarin in Syria’s arsenal, as well as any precursor chemicals that are stored in bulk.

The new portable hydrolysis unit can be up and running within 10 days of arriving at a site anywhere in the world, according to the Pentagon.

The technology is “designed to convert chemical agents into compounds not usable as weapons,” says Pentagon spokeswoman Jennifer D. Elzea. “Neutralization is achieved by mixing the agent with water and other chemicals and heating it.” The system can neutralize between 5 and 25 metric tons of chemicals per day, depending on the material.

But Jackson says, “I’d be nervous using it in Syria because it would be vulnerable to attack. But maybe it could be used elsewhere if the precursor chemicals are transported to another country.”

OPCW agrees. Its head, Ahmet Üzümcü, stated on Nov. 5 that shipping Syria’s vast stockpile of precursor chemicals to other countries for neutralization is “the most viable option” given the ongoing war there. The chemical weapons treaty bars countries from moving their stockpiles. But in Syria’s case, a UN resolution allows it. Albania, Belgium, and France are thought to be under consideration as destinations for Syria’s stockpile.

“The logistical demands for moving hundreds of tons of chemical weapons over long distances are huge,” Trapp tells C&EN. But the biggest challenge, he says, is security. “No one can guarantee that arrangements can be made to ensure the safe passage of the weapons through hostile territory,” Trapp remarks.

Walker believes that all disposal work inside Syria can be wrapped up by the middle of next year as required, but out-of-country operation—if that is necessary—might take longer. “One can declare, however, that the mid-2014 deadline has been met as long as the chemicals are removed from Syria,” he says.

Energy
Russia destroys last of its chemical weapons stockpile
Energy
Most Of World’s Chemical Arms Destroyed
Environment
Half Of Syria's Chemical Arsenal Has Left The Country
Share X
To send an e-mail to multiple recipients, separate e-mail addresses with a comma, semicolon, or both.
Title: Eliminating Syria’s Chemical Arsenal
Author: Glenn Hess
Chemical & Engineering News will not share your email address with any other person or company.