Companies vie for a nonpetrochemical route into this lucrative industry 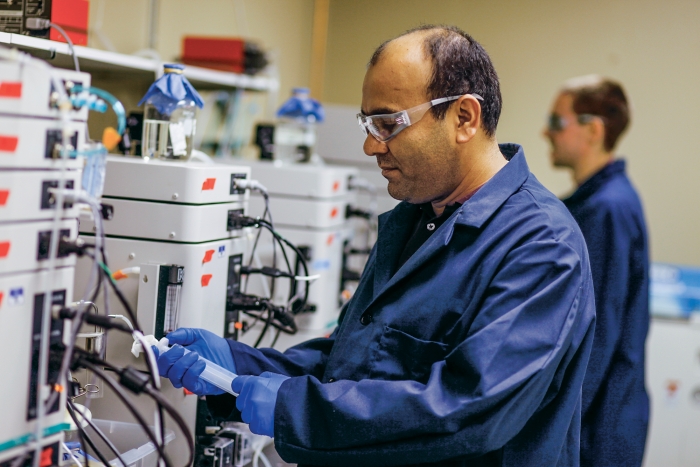 Credit: OPXBio
OPXBio scientists are working toward a biobased route to acrylic acid through 3-hydroxypropionic acid.

Chemical and biotech firms are competing to meet one of the biggest challenges in biobased chemicals: an alternative to propylene-derived acrylic acid. The global market is worth billions of dollars, but it’s not just money that companies are after. Also at stake are the bragging rights for making consumer products such as diapers and paints more sustainable.

About 5 million metric tons of acrylic acid will be produced globally this year using a petroleum-based process, according to William L. Tittle, a principal with the consulting group Nexant. More than half of it will be reacted with alcohols to make acrylate esters, used in acrylic paints. Most of the rest will be polymerized into polyacrylic acid, the backbone of the superabsorbent polymers used in disposable diapers.

Procter & Gamble and other diaper makers would love to feature polymers derived from plants, instead of petroleum, as part of a green marketing campaign. But chemical executives know that such cost-conscious consumer firms won’t pay much more than they do currently for raw materials. So while the potential market is luring giants such as Dow Chemical and BASF, as well as newcomers OPX Biotechnologies, Myriant, and Metabolix, these companies are aware that beating the economics of the petrochemical route, which has had a 40-year head start, won’t be easy.

Propylene established itself as the dominant raw material for acrylic acid in the 1960s. That’s when chemical firms found an alternative to the Reppe process, which combined acetylene, carbon monoxide, and water to make acrylic acid. In the replacement process, they oxidize propylene to make acrolein, which is oxidized further to yield acrylic acid.

Today, though, propylene is a problem for acrylic acid makers, particularly in the U.S. The compound is primarily made as a coproduct in the ethylene crackers that line the Gulf Coast. Thanks to the advent of low-cost ethane extracted from shale deposits, cracker operators are favoring natural-gas-based feedstocks over petroleum-derived ones. Cracking natural gas yields less coproduct propylene, causing its price to go up. This presents an opening for biobased processes, Tittle explains.

But France’s Arkema serves as an example of how tough competing with the established acrylic acid process will be. In 2010, the specialty chemical company started a pilot plant for converting biobased glycerin into acrylic acid. Executives had high hopes for the process because, just as in the propylene-based route, it makes acrolein as an intermediate.

Arkema got the glycerin-based process ready for full-scale manufacturing but then put it on hold after concluding that it can’t, at present, compete with the propylene route. “The question is the cost of glycerin,” says Marie-Pierre Chevallier, Arkema’s group vice president of acrylics.

Glycerin is a by-product of converting triglycerides from fats and oils into biodiesel fuel. In the mid-2000s, when Arkema was developing its process, bio­fuels were booming and glycerin was being churned out left and right. “The vision that existed at that moment in time was that the market for glycerin would be oversupplied,” Chevallier says. But the glut turned out to be only temporary.

The acrylic acid supply chain won’t tolerate higher costs, Chevallier acknowledges. “We are not in a situation where a P&G or any company manufacturing diapers at this moment is ready to pay a 15% premium because it is a biobased raw material,” she says. “This is because no consumer is ready to pay a premium for the diaper.”

Other firms developing biobased processes are undeterred. “We wouldn’t be in this if we didn’t believe that the process we’re developing has the long-term potential to have good economics relative to propylene-based acrylic acid,” says Charles R. Eggert, OPXBio’s chief executive officer.

In the short term, customers may be willing to pay an “early-stage innovation premium” for biobased acrylic acid, Eggert says, not unlike how tech-savvy consumers pay more to be the first to purchase the latest smartphone. Longer term, as companies gain experience with biobased processes, costs will fall in line with propylene-based acrylic acid, he predicts.

To this end, OPXBio has been working on a fermentation route to make acrylic acid from sugar via the intermediate 3-hydroxy­propionic acid, or 3-HP.

The learning curve has been steep. “Getting the pathway to make some hydroxypropionic acid happens fairly readily,” says David A. Hogsett, the firm’s chief technology officer. “Making sure you can do it in the yields and the speeds and the product concentrations that are necessary turns out to be what you spend most of your time on.”

For the process of dehydrating 3-HP into acrylic acid, OPXBio has teamed with Dow Chemical. The pair has already made small quantities of high-purity glacial acrylic acid, which is used to make superabsorbent polymers, for customer sampling.

OPXBio is currently making 3-HP in 3,000-L fermentation vessels and plans to scale up to fermenters as big as 50,000 L within the next year. Officials say they’re confident about the scale-up, given that the transition to larger-scale manufacturing has thus far been smooth. Eggert hopes to start commercial production in 2017.

Cargill, which has been making biobased chemicals for more than a decade, also hopes to enter the acrylic acid business with a 3-HP process. The company has been working with the industrial biotechnology specialist Novozymes since 2008. BASF, the world’s largest acrylic acid producer, joined the effort last year.

The partners demonstrated kilogram-quantity production of 3-HP earlier this year and plan to scale up the entire ­process next year in fermentation vessels of up to 80,000 L. “Most of the R&D homework is done,” says Christian Weinel, head of the biobased acrylic acid program at BASF.

Weinel is confident that customers will line up to buy biobased acrylic acid derivatives once they are ready. “A pioneering project like this, of course, requires a strong market pull,” he says. “So far we have received very positive feedback and interest from customers across different industries.”

Best known for commercializing succinic acid, another biobased chemical, Massachusetts-based Myriant is developing a route to acrylic acid that runs through sugar-derived lactic acid. Myriant President and Chief Operating Officer Cenan Ozmeral sees an advantage over the 3-HP route. “It is much cheaper to make lactic acid at very high yields and at very high concentrations than 3-HP,” he says.

There is a catch. With its terminal hydroxyl group, 3-HP is easier to dehydrate than lactic acid, also known as 2-hydroxypropanoic acid. Myriant worked with chemists from Massachusetts Institute of Technology and Pennsylvania State University to develop catalysts that provide 90% conversion of lactic acid and 80% selectivity for acrylic acid. Ozmeral hopes to soon get selectivity up to 90% so Myriant can advance to pilot-plant production next year.

For commercialization, Myriant would seek a partner. This is similar to how the company went about commercializing succinic acid. In that business, the company locked arms with Johnson Matthey Davy Technologies on a process to make butanediol via succinic acid instead of the traditional maleic anhydride.

One more contender in plant-derived acrylic acid is another Massachusetts-based biotech firm, Metabolix. Having made its mark by producing polyhydroxyalkanoate polymers in microbes, Metabolix wants to use a polymer as an intermediate for acrylic acid.

The company’s process involves engineering microbes to express poly(3-hydroxypropionate), or P3HP. It then dries off the water to get solid biomass. When this biomass is then heated, P3HP vaporizes into acrylic acid. “We don’t have to fish a molecule out of a broth,” says Max Senechal, vice president of biobased chemicals for Metabolix.

One advantage the process has over other routes to acrylic acid is logistics, according to Senechal. Shipping acrylic acid long distances is tough because it can polymerize along the way. In Metabolix’s process, dry biomass containing P3HP can be shipped to a customer, allowing for recovery of the reactive monomer on-site.

Biobased processes will need every advantage they can get if they are to succeed against the entrenched propylene route. They need to be proven technically and scaled up before customers will be willing to swap propylene for sugar, and this will take years.

Making a biobased move is even more of a gamble because in a few years the propylene supply pendulum could reverse. Energy companies are increasingly finding propane in shale gas, and in the U.S. alone, a half-dozen facilities are planned to dehydrogenate propane into propylene. Within a few years, they could increase supply of the chemical and lower its price.

As Arkema’s Chevallier knows all too well, competing with a chemical route is no sure thing. 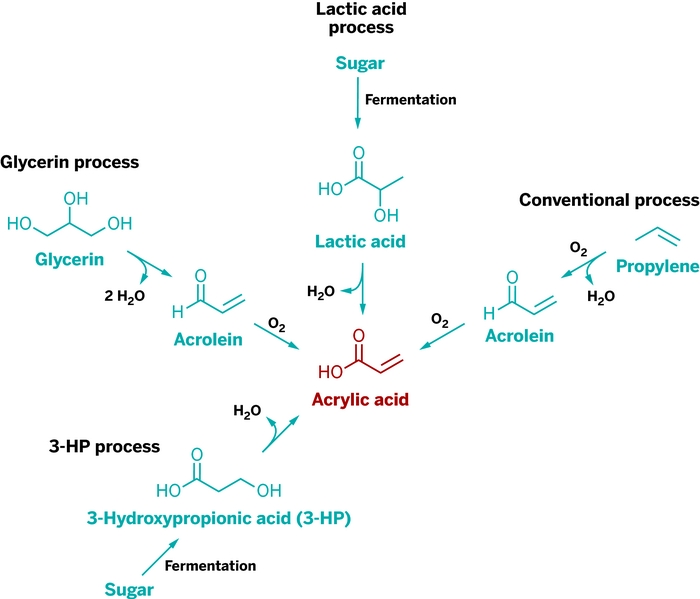 Chemical and biotech firms can use many routes to make acrylic acid.