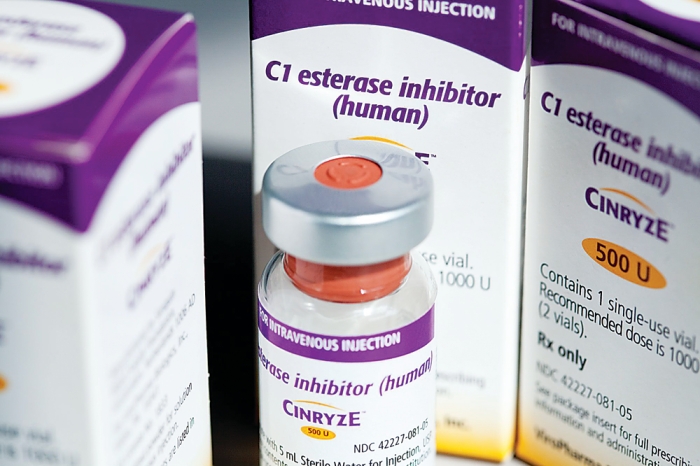 Credit: ViroPharma
ViroPharma’s Cinryze is approved for treatment of HAE, a rare disease.

The Irish drug company Shire has agreed to acquire ViroPharma, a Pennsylvania-based drug firm focused on enzyme replacement therapies for rare diseases, for $4.2 billion. The deal will add ViroPharma’s Cinryze, an approved drug for the prophylactic treatment of hereditary angioedema (HAE), to Shire’s portfolio of drugs for rare diseases, which includes a therapy for acute HAE.

HAE is a potentially life-threatening genetic disease caused by low levels or a dysfunction of C1 esterase inhibitor, which results in dangerous swelling of skin and mucous membranes. “The acquisition of ViroPharma will immediately benefit Shire and is entirely consistent with our clear strategic objective of strengthening our rare disease portfolio,” says Shire CEO Flemming Ornskov.

Shire has made several major acquisitions over the past dozen years, including the $1.6 billion purchase of Transkaryotic Therapies, a rare disease specialist, in 2005. Earlier this year, Shire acquired Premacure, a rare disease drug firm developing a protein replacement therapy for an eye disorder in infants born prematurely.

Therapies for rare diseases have become a growth niche in drug development since Genzyme pioneered the field with the first treatment for Gaucher’s disease in 1994. In recent years, several companies, including Shire, have committed to expanding their research on rare diseases. An incentive in developing such therapies is that they carry a steep price-to-consumer premium. At about $4,500 for a dose that must be administered every three to four days, Cinryze can cost a patient upward of $400,000 per year.

“This is the big deal the market had been waiting for,” Savvas Neophytou, an analyst at Panmure Gordon & Co., told investors, noting that Ornskov had “telegraphed” a major acquisition last year.

Ronny Gal, an analyst with Sanford C. Bernstein & Co., agrees that the deal is significant, although expensive. “It is done at essentially what we thought was close to full price,” Gal tells C&EN. He says Shire is targeting expansion of its rare disease portfolio primarily by strengthening its arsenal against HAE. “It is a way to double the number of products in the bag,” he says, “so it is a very logical acquisition.”

Business
Shire Guns For Baxalta
Business
Shire Goes After Baxalta
Business
Alexion Will Pay $8.4 Billion To Buy Synageva
Share X
To send an e-mail to multiple recipients, separate e-mail addresses with a comma, semicolon, or both.
Title: Rare Disease, Big Price Tag
Author: Rick Mullin
Chemical & Engineering News will not share your email address with any other person or company.