[+]Enlarge
Credit: Newscom
Sriracha: Too hot to handle for residents near a hot-sauce-producing factory. 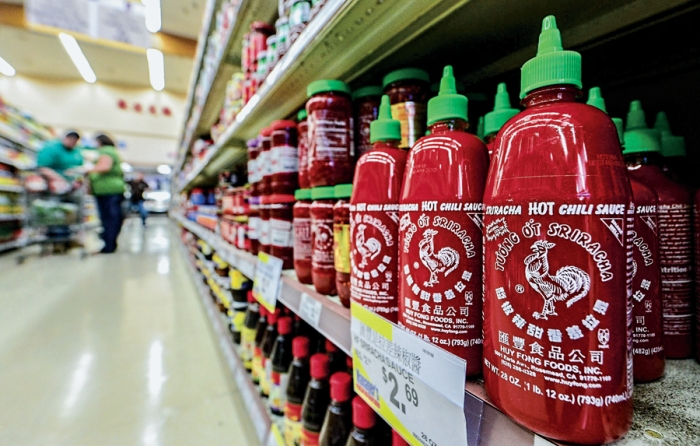 Credit: Newscom
Sriracha: Too hot to handle for residents near a hot-sauce-producing factory.

Aficionados of Sriracha hot sauce can be, shall we say, quite devoted.

Enthusiasts buy products as varied as iPhone cases and underwear emblazoned with Sriracha’s rooster logo. Festivals draw thousands to celebrate the spicy red sauce in the clear bottle with the green cap. A documentary film is even in the works about Sriracha and its creator, David Tran.

So you can imagine fans’ shock when the Los Angeles suburb of Irwindale sued to shut down the Sriracha factory there last month. Because the plant was in the middle of pepper-processing season, a shutdown would have caused a worldwide shortage of the highly coveted condiment.

Irwindale residents have been complaining that the plant is emitting such a stink that they have been forced to retreat indoors to avoid severe headaches and burning eyes. The local air-quality management agency has not detected any abnormalities, but it is continuing to monitor the situation.

What’s causing the sting? Sriracha itself is simple. The main ingredient is fresh ground red jalapeños, and it’s accompanied by sugar, salt, garlic, vinegar, and preservatives.

Given these ingredients, the probable eye-stinging culprit is either capsaicin or dihydrocapsaicin, the two most abundant pungent compounds in hot peppers, explains Kantha Shelke, a food chemist and spokeswoman for the Institute of Food Technologists. She doesn’t find the irritation surprising, given that a pepper-garlic combination is noxious enough to be used as an organic pesticide.

But many hot sauce processors don’t have a problem with their neighbors, likely because their recipes include some sort of oil, Shelke says. Any Newscripts reader who has tried unsuccessfully to sooth a burning mouth with water knows that a pepper’s active ingredients will only stop stinging if absorbed by fat. But there’s no oil in Sriracha to capture the volatile compounds before they flee the building, Shelke explains.

Although the city’s residents probably aren’t satisfied with the action taken, Sriracha fans breathed a sigh of relief when a judge allowed the plant to stay open while a solution is sought.

Shelke suggests an oil-based filter to capture the volatile capsaicin compounds before they leave the factory. Then the spicy oil could be used for other purposes. Sriracha perfume, anyone?

Sriracha addicts and other food fanatics likely aren’t aware of how fickle their palates are. A study in the journal Flavour by University of Oxford experimental psychologists shows that varying the color or weight of cutlery can influence how food tastes (2013, DOI: 10.1186/2044-7248-2-21).

Vanessa Harrar and Charles Spence examined how people perceived the taste of yogurt on different weights and colors of plastic utensils.

First, they hid weights inside the handles of different-sized spoons. Then they asked volunteers what they thought about the yogurt.

The yogurt from a smaller, lighter spoon was perceived as sweeter and more dense than the same sample from larger or heavier spoons. That could be because people are used to eating desserts with smaller cutlery, Harrar says.

When the researchers varied spoon color instead of weight, they found that the contrast between the hues of the food and the cutlery changed taste perception. For example, pink-tinted yogurt was perceived as sweeter on a white spoon than on a black one.

“The main finding is really about your expectations and whether they are met or not,” Harrar explains. She and her colleagues have studied colors and weights of plates and bowls and found a similar influence on the palate.

So when placing Sriracha-flavored sorbet, popcorn, or beef jerky on the table, take time to consider the color of your serving dish.

Food Science
Food chemists uncover the secrets behind pretzels’ unique scent
Environment
The scientists who sniff water
Food Science
What's nitro cold brew, and why is it so damn delicious?
Share X
To send an e-mail to multiple recipients, separate e-mail addresses with a comma, semicolon, or both.
Title: Sriracha Showdown, Cutlery Choices
Author: Andrea Widener
Chemical & Engineering News will not share your email address with any other person or company.