As the legalization of marijuana spreads across the U.S., labs sprout up to offer chemical analyses of cannabis products

CORRECTION: This story was updated on Dec. 27, 2013, to correct the statement that Iron Labs is the only marijuana testing laboratory in Michigan. There are multiple marijuana testing labs in that state.
ACS's Reactions team explains the chemistry behind marijuana’s high and investigate what scientists are doing to ensure the safety and potency of weed.
Credit: ACS Reactions

When considering products with names like Grandaddy Purple and Blueberry Yum Yum, it can be difficult to take matters such as quality control seriously. But why should medical marijuana be different from any other pharmaceutical?

We take certain things for granted each time we open a bottle of prescription medicine. We trust that the medication has been tested to ensure that it contains no harmful contaminants. We consume each pill confident that it contains a precise dose of an active pharmaceutical ingredient.

For the patients who rely on medical marijuana to ease their symptoms, however, such safety and consistency are rarely a given. Driven in part by consumer demand and in part by new regulations, analytical labs are popping up to test marijuana and associated products for safety and potency.

If you are having trouble viewing images, click here for a PDF of the article. 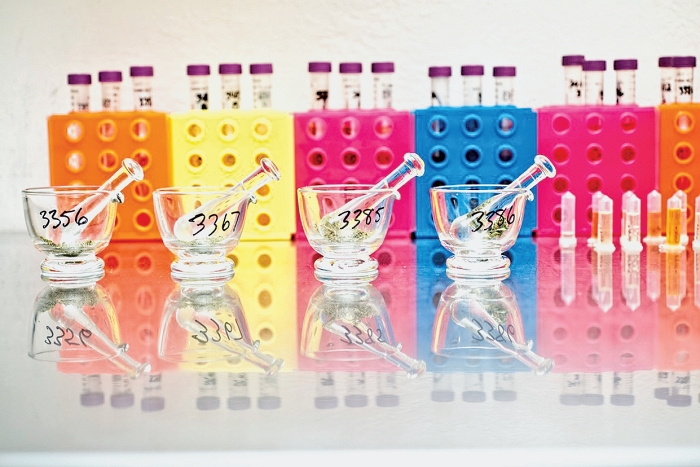 During the past decade, Cannabis indica and Cannabis sativa, the two cannabis species that produce useful amounts of psychoactive compounds, have grown in popularity for treating a variety of ailments. Smoked, consumed in food and tinctures, or applied via eye drops and lotion, cannabis is used to relieve nausea and vomiting, boost the appetites of chemotherapy patients, reduce seizure events, diminish neuropathic pain, and lower intraocular eye pressure.

Medical marijuana is currently legal in 20 states and the District of Columbia. Last year, both Colorado and Washington passed legislation making it legal for any adult to purchase limited quantities of marijuana in those states. Under federal law, however, possession of marijuana is illegal. So laboratories set up to test other botanical products have shied away from the budding marijuana market, not wanting to risk having their businesses shut down by the Drug Enforcement Administration. The void is being filled mostly by small labs dedicated solely to testing cannabis. 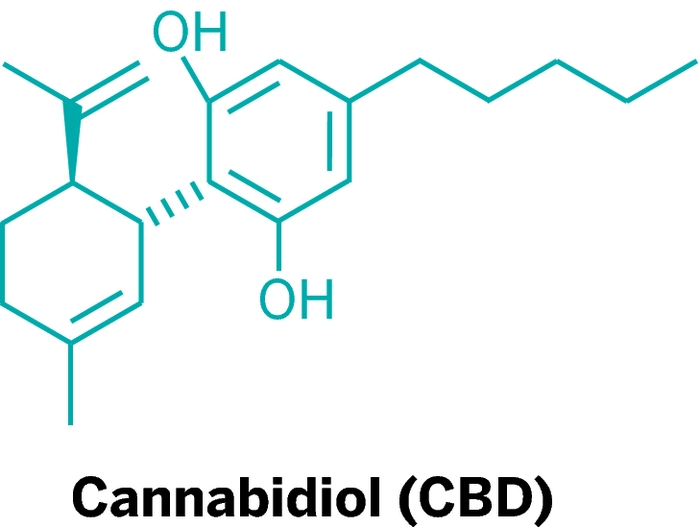 “We’re kind of like a quality-control lab for medical marijuana products,” says Randall Oliver, a chief scientist at Analytical 360, a marijuana testing lab in Seattle that started serving Washington’s medical marijuana community about two years ago. The lab tests for potency by using high-performance liquid chromatography (HPLC) to quantify the amount of tetrahydrocannabinol (THC), cannabidiol (CBD), and several other cannabinoids and terpenoids. It looks for these compounds in dried marijuana plants, which will be smoked, and other products, such as food and personal care products that have been infused with cannabis extracts.

“Potency testing is very important with edibles,” says Genifer Murray, founder and chief executive officer of CannLabs, a marijuana analysis lab in Denver. Tales of people eating a marijuana-infused brownie and then calling 911 with a panic attack because they’ve taken too high a dose are all too common. Although the effects of smoking marijuana come on quickly, they also subside quickly, she says. “Edibles will stay with you for hours,” Murray notes.

Testing edibles for potency can be surprisingly challenging, Oliver says. “You have to extract cannabinoids from many different kinds of products, including taffy, caramel, gum, butter, and soda. It’s not just a flower that we’re dealing with.”

Potency testing is also important to ensure patients are taking the dose they think they are. “A lot of patients are growing their own product, and they want to know how strong it is and to compare that from batch to batch,” adds Joseph E. Rutkowski, an analytical chemist at Iron Labs, a marijuana testing lab in Michigan. 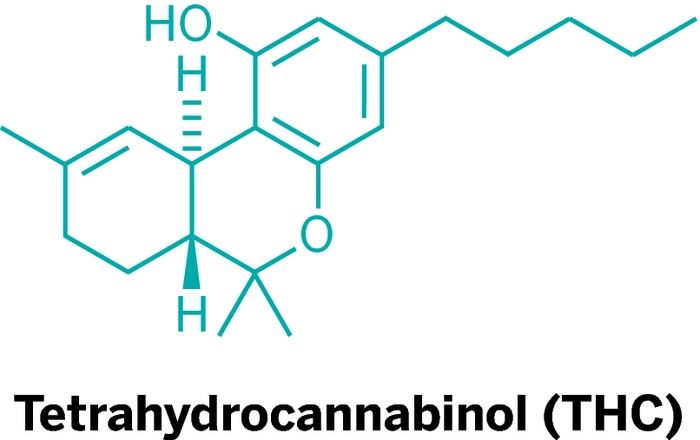 Murray adds that CannLabs tested some medical marijuana products for a housebound patient who thought she was getting 300 mg of THC in each dose when in fact she was only getting 16 mg.

Safety testing has also become an important component of marijuana analysis. “If you’re really interested in the medicinal application, you shouldn’t focus on how high people are going to get. You should focus on patient safety,” says Christopher Hudalla, founder and chief scientific officer of ProVerde Laboratories, a testing lab in Massachusetts. “We recommended to the Massachusetts Department of Public Health that in addition to providing a cannabinoid and terpenoid profile, it’s important to look for pesticides and microbiological contaminants.”

“Given the infancy of this industry, were someone to get sick from medical marijuana, it would be devastating to the progress that people are trying to make,” says Heather Despres, lab director at CannLabs.

To that end, many labs inspect marijuana plants for mold and mildew and test for microbes, such as Escherichia coli and Salmonella. Gas chromatography (GC) is usually used to test edibles and other products made with cannabis extracts for residual solvents that were used during the extraction process. Pesticide testing using GC coupled with mass spectrometry is also becoming more commonplace.

For potency, the means of testing varies substantially from lab to lab. Iron Labs uses HPLC for edibles and GC for plant material that will be smoked. CannLabs recently switched from using HPLC to ultraperformance liquid chromatography (UPLC). ProVerde Labs plans to use UPC2, an instrument that combines supercritical fluid chromatography and UPLC.

To download a PDF of this article, go to http://cenm.ag/marijuana.

Some labs rely solely on GC, a method that’s not accurate when it comes to testing products that contain cannabis active ingredients extracted via a cold process, Hudalla notes. That’s because in addition to THC and CBD, marijuana plants contain carboxylated forms of these compounds, known as THC-acid and CBD-acid. These acidic forms are thought to have medicinal effects that are different from those of THC and CBD. When injected into a GC, however, the acidic forms readily decarboxylate. If the product is smoked, those acidic products will decarboxylate during the combustion process. But if the product is going to be eaten or applied topically, then GC overestimates the amount of THC and CBD.

Navigating the technological landscape of marijuana testing is a cakewalk compared with traversing the legal landscape. Each state’s regulations are different. For example, when Massachusetts legalized medical marijuana, it became the first state to require third-party safety and potency testing for all cannabis products. However, it is currently illegal to operate a marijuana testing lab in the state. And Massachusetts’s marijuana purveyors can forget about sending their products out of state for testing. Mailing marijuana is a federal crime.

“As a business owner, if I have cannabis in my shop, I could have all of my equipment seized by the government,” says ProVerde Labs’ Hudalla. So he’s currently using a million dollars’ worth of analytical instrumentation to analyze hops, which are similar to marijuana from a sample preparation standpoint. “We’re trying to develop methods that hopefully will be very quickly transferable to cannabis,” he says.

Before opening ProVerde Labs in September, Hudalla spent 14 years developing instruments and analytical methods with Waters Corp. “I’m a chemistry nerd at heart,” he says. “I am probably the least likely person in the world to have anything to do with a drug, so my friends think it’s a big joke. But it’s really the chemistry that drives me. I learn so much every day.”

The scientists who spoke with C&EN have spent years working in more traditional chemical careers in academia, industry, and government. Many say that they do at times worry about how the scientific community will perceive their work with marijuana. But all say that the work is rewarding, particularly when they hear from patients how the drug has transformed their lives. As Hudalla puts it, “I feel like this is part of my contribution back to mankind.”

To download a PDF of this article, go to http://cenm.ag/marijuana.

Comments
Zeyead Gharib (April 24, 2014 2:11 AM)
Fantastic article! Loved the info and I loved the part where you said the laws were much harder to deal with than the actual quality control aspects. As soon as the laws shift here in PA I'm gonna be ready.
Reply »

Hemp Share (May 3, 2014 10:27 AM)
I'm curious on the information that indicates there is THC and CBD in the Cannabis. "That’s because in addition to THC and CBD, marijuana plants contain carboxylated forms of these compounds" - The 2011 Genome sequencing by Medicinal Genomics shows the bio-synthetic pathway ends at THCA/CBDA? http://medicinalgenomics.com
Reply »

Bethany Halford (May 7, 2014 9:10 AM)
Hi Hemp Share, perhaps there's a decarboxylation that doesn't require an enzyme. If there weren't THC and CBD in cannabis, then cold-extraction techniques would only extract the acids, right? I understand that is not the case.
Reply »

We wrote up a blog on this topic the other day, we will be writing two (2) more blogs articles over "Cannabis Concentrates and Infused Products" and "Cannabis Analysis and Testing". Here's the latest article that we wrote: http://www.greencultured.co/cannabis-chemistry-101/

anthony beam (November 6, 2015 8:41 AM)
I would really love to become an chemist specialist at you guys job site. Well appreciated and please get in contact with me. Thank you.
Reply »