This guest editorial is by Roald Hoffmann, the Frank H. T. Rhodes Professor of Humane Letters Emeritus at Cornell University and recipient of the 1981 Nobel Prize in Chemistry.

AT PEACE
[+]Enlarge
Credit: Wikimedia Commons
A terracotta figurine from the Hal Saflieni Hypogeum in Malta. 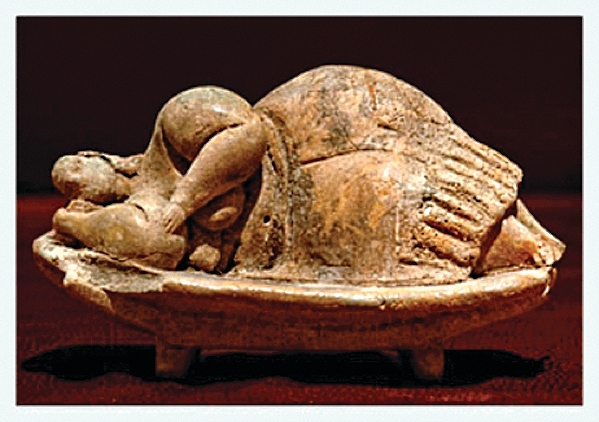 Credit: Wikimedia Commons
A terracotta figurine from the Hal Saflieni Hypogeum in Malta.

Every two years, scientists from the Middle East gather to talk about science (see page 38). The structure of these meetings—the Malta Conferences—has remained constant: Nobel Laureates give the plenary lectures, while in workshops and smaller talks, chemists (for the most part) from the Arab countries, Israel, and Iran speak. Good food, good science, much cordiality. And small tangible outcomes—a truly brave joint declaration of concern about the deteriorating water situation in the region, a little collaboration across borders. The steps seem small, but I find them heartening.

Things have changed in the region, not all for the good: the reality versus the promise of the Arab Spring, the slaughter in Syria. One Jordanian presenter showed a photo of his Syrian collaborator, killed; another spoke with feeling about the work of teams of his Syrian university students doing molecular modeling in drug design, gunfire outside. For this conference, and the previous one, the European Union under the Schengen Agreement created only impediments, denying visas to all but one of the good Iranian scientists who were with us in former years. Not that the U.S. would have done better.

What has made me continue going to these conferences, which are driven by Zafra Lerman’s organizing energy, is that I just cannot think of any other locus where these politically isolated groups of chemists (of a certain age, to be sure) talk to each other. Oh yes, we welcome their talented students to our Ph.D. programs, as postdocs. And we hire the best among the best. But do we have an ACS showcase of good Arab-world and Iranian science at one of our meetings?

I think of small vignettes from the conferences—a brilliant Israeli Arab chemist (one of the few younger people there) shifting effortlessly at the dinner table from Hebrew to Arabic, as no one else in that group could; a Saudi woman setting us straight about the number of female university graduates in her country; a Palestinian chemist telling me that his collaboration with two Israeli groups had to be “laundered,” with the help of their German sponsors, so as not to be stopped by the policies of his own government; and another Palestinian telling of the Israeli checkpoints that made the few miles to a seminar in Jerusalem a demeaning daylong trip. A remarkable side effect of this conference is that Arab-country participants are able to learn of work in Iran (when Iranians were not barred by the EU), and vice versa. In general, we have little idea of the bad relations and lack of contact among the Iranian and Arab-country communities.

I am not naive enough to think that this conference will bring peace to the Middle East. But I was naive enough when these conferences began to think that there was zero cooperation and communication between Palestinian and Israeli chemists. The reality is much more flexible than the stereotypes that I, and I think most Americans, have. I also learned of the network of Lebanese and Egyptian scientists working in the Gulf countries, and of women doing first-class science in Iran (again in previous conferences). And that getting young men into science is just as much a problem in Israel as elsewhere.

We stood all together in a neolithic temple on Malta, a strategically located island as run over by invaders in its history as was Yerushalayim/al-Quds/Jerusalem. No written text is left to us; we must imagine the mind of the Maltese 5,000 years ago. In the temples was found a beautifully crafted terracotta figurine of a thick-limbed woman lying down. Resting, at peace. We will never be as peaceful as she is. Our peace, the peace in the Middle East, its peoples’ talents allowed to flourish in their land, is going to be a dynamic peace, full of the tension of creation. Cooperation will play a role. The Malta Conferences point us to that future.

Persistent Pollutants
Goodbye to some PFAS in food packaging
Pollution
Satellites can now see air pollution inequality within cities
Pollution
Mercury makes it deep into marine trenches
Share X
To send an e-mail to multiple recipients, separate e-mail addresses with a comma, semicolon, or both.
Title: Maltese Reflections
Author:
Chemical & Engineering News will not share your email address with any other person or company.