BLACK GOLD
[+]Enlarge
Credit: Newscom
Cairn India plans to use polyacrylamide in oil drilling in the state of Rajasthan, boosting demand for it and its monomer. Shown here is a Cairn oil storage facility in Rajasthan. 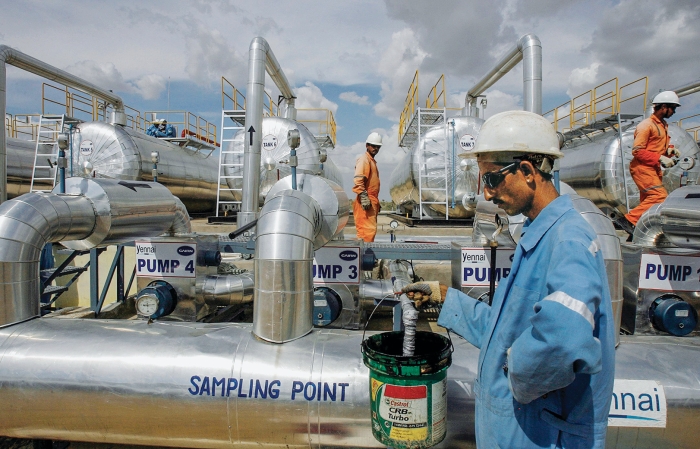 Credit: Newscom
Cairn India plans to use polyacrylamide in oil drilling in the state of Rajasthan, boosting demand for it and its monomer. Shown here is a Cairn oil storage facility in Rajasthan.

When Anup Jatia set up his company in Mumbai at the age of 23, he had no experience of India, even if his passport said that’s where he was from. What he knew was Japan, the country where he had grown up.

Jatia’s plan was to sell Japan-made chemicals in India. However, business started out slow, partly because Japanese manufacturers had little interest in the South Asian country.

Nowadays, Japanese interest in India is high. From its struggling roots, Jatia’s company, Black Rose Industries, has become the Indian representative for some of Japan’s largest chemical firms. And Black Rose itself recently became a chemical manufacturer. Making use of a process licensed from Mitsui Chemicals, it opened India’s first acrylamide plant.

Jatia’s journey is a source of insight into business in India and in Japan. Over the years, he learned that India’s reputation for being unfriendly to business is well deserved; setting up a chemical plant in the country was harder than he foresaw. On the other hand, he found Japanese companies to be straightforward to deal with, belying their reputation for clannishness.

In 1994, a few months after graduating from California Institute of Technology where he studied engineering and applied sciences, Jatia set up shop in Mumbai. By establishing a chemical import business there, he was reversing the path of his father, who had moved from India in the 1960s to rapidly expanding Japan.

“My father had an international trading business based in Osaka with interests in textiles, tires, electronics, chemicals, and other goods,” Jatia says. “After college, I was keen to move to either India or China, and I chose India.”

For several years, the business of importing Japanese chemicals was slow, largely because Japanese chemical companies didn’t see India as an important market. His company got some business initially, but no growth after that. Jatia wondered if India had been the wrong choice for him.

Acting on a suggestion from his father, who was still in Japan, Jatia set up a safety glove manufacturing operation in India. “His trading business had identified some large clients for industrial gloves in Japan,” Jatia says. Business blossomed, and within a few years, Black Rose was operating four production facilities. The name Black Rose is in fact inherited from a textile company Jatia acquired to obtain land where he could set up his plants.

Black Rose’s chemical import business emerged from its slumber around 2007. Two things happened almost simultaneously, Jatia recalls. First was a pickup in India’s economy, which he attributes to an expansion in India’s mobile telephone networks. Previously, mobile phones had been marketed—and priced—as luxury items. As handset prices fell, the ability to communicate across the country improved, creating a domestic trading boom, Jatia theorizes.

Second, in reaction to violent anti-Japanese protests that erupted in major Chinese cities in 2005, Japan’s government made a coordinated effort to develop the Indian market. The state-owned broadcast service NHK started to cover India in a favorable light, producing, for instance, items highlighting the country’s rich cultural heritage. Japan’s government called the shift toward India “China-plus-one,” suggesting that the Japanese economy should not rely too heavily on China.

And with Jatia long positioned as a go-to person in India, Black Rose’s business started to boom. “Many potential Japanese business partners have approached us since 2007,” he says. “I no longer had reasons to regret my choice.”

Through his interactions with Japanese chemical company managers, Jatia learned that a key concern with India was getting paid after delivering their goods. In response, Black Rose adopted a policy of paying for its chemicals at the time of placing the order, in exchange for discounts.

The up-front approach was a winner. It enabled Black Rose to become the Indian agent for several Japanese firms, including Sumitomo Chemical, Mitsui Chemicals, and Mitsubishi Gas Chemical. In some cases, manufacturers transferred their accounts with Japanese trading companies to Black Rose. “By the time we started to negotiate an acrylamide process license with Mitsui, we had become their only agent in India,” Jatia says.

Black Rose might not have considered acrylamide production had Mitsui not announced in 2009 that it would no longer export acrylamide because it wanted to focus on the liquid form, which is rarely exported. “Their main concern was the handling of powdered acrylamide, which was not considered to be safe due to its toxicity,” Jatia recalls. “This was going to be bad for us.”

He decided to replace the Mitsui acrylamide with product he would make himself. After performing a feasibility study and securing a process license from Mitsui, Black Rose acquired land in the state of Gujarat, India’s main chemical production hub.

But construction took a long time to get under way. Acrylonitrile, a hazardous substance, is the key raw material needed to make acrylamide, and the Gujarat government raised questions concerning the impact of the project on the land, workers, and nearby communities.

Black Rose made modifications to its plant design to address the concerns. Although the back-and-forth with the state government added several months to Black Rose’s timeline, the facility is safer than it would have been otherwise, Jatia says.

The plant can make 5,000 metric tons of acrylamide annually, which is 30% more than the entire Indian merchant market in 2010. But Jatia expects that the local availability of acrylamide will encourage more producers of polyacrylamide, the main use for the compound, to set up operations in India.

And the Indian market has huge potential. One company alone, Cairn India, could end up consuming more polyacrylamide than India can now produce. Cairn plans to use enhanced oil recovery (EOR) to extract crude oil in the state of Ra­jas­than, and the EOR process requires huge quantities of polyacrylamide.

Arnaud Lefevre, area manager for South Asia and Japan at SNF, a French company that is the world’s largest producer of polyacrylamide, confirms that India offers numerous opportunities for the product, and not just in EOR. The polymer is used in mining, ceramics production, and as a flocculant in the treatment of industrial and municipal wastewater, Lefevre notes.

Water treatment, particularly the municipal market, has much room to grow in India, Lefevre says. At the moment, treatment of wastewater is not well established because only a handful of cities have comprehensive sewage systems to collect it. But as the quality of water in India’s rivers and lakes deteriorates, Indian cities will have no choice but to act. “It will happen; they will make that effort,” he says.

SNF does not intend to rely on Black Rose for its acrylamide. In Vizag, Andhra Pradesh state, the company has opened its first Indian polyacrylamide plant. For the time being, the facility uses acrylamide produced in France, but SNF plans to eventually produce the monomer in Vizag. “Our proprietary acrylamide process has certain competitive advantages,” Lefevre asserts.

At Black Rose, Jatia says he is confident that his acrylamide will be bought up. “We are looking at expanding to at least 30,000 metric tons in the next four years,” he says. Global producers of polyacrylamide, a list that includes BASF, Kemira, and Dow Chemical, could set up in India. Also, he has been approached by several Indian firms planning polyacrylamide facilities. Alternatively, Black Rose could sell to Chinese firms setting up polyacrylamide plants in India.

For Jatia, who as a young college graduate carefully selected India over China as the most promising place to settle down, selling to Chinese companies would mean that, in the end, China has come to him instead.