[+]Enlarge
Credit: Courtesy of Henry J. Snaith
A thin-film solar cell made by spin-coating a perovskite onto glass appears light gray and transparent to the eye. 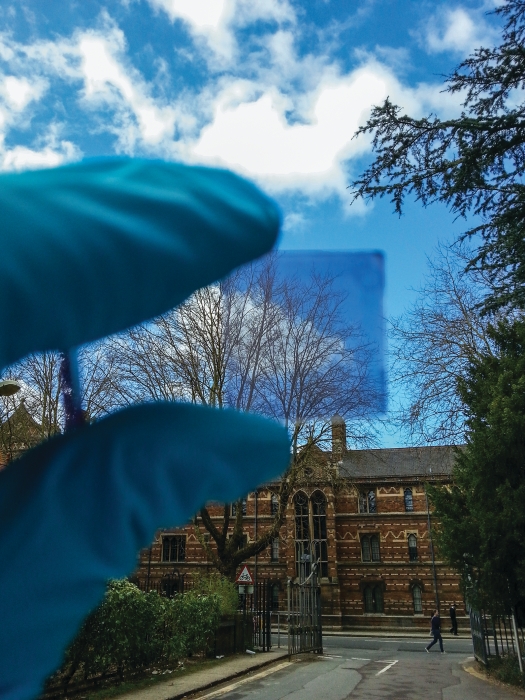 Credit: Courtesy of Henry J. Snaith
A thin-film solar cell made by spin-coating a perovskite onto glass appears light gray and transparent to the eye.

The vast real estate of windows in office buildings and skyscrapers could be a fruitful field for harvesting solar energy—if lightweight solar cells could be made with high enough efficiency and aesthetic appeal. Now researchers at Oxford University report semitransparent solar cells that might do the trick (ACS Nano 2013, DOI: 10.1021/nn4052309).

For use in windows, solar cells need to absorb enough light to produce sufficient energy but also let enough visible light through to be transparent. Organic photovoltaic materials can absorb infrared light and pass visible light, but they have low energy-conversion efficiencies. On the other hand, inorganic semiconductors, such as amorphous silicon, absorb visible light strongly. So films of these materials must be thin to be transparent, thus decreasing the amount of photons they capture. They also tend to give windows a brownish or reddish tint, which architects dislike.

To make their semitransparent cells, the researchers first deposited a film of the perovskite CH3NH3PbI3-xClx onto glass coated with fluorine-doped tin oxide. They made the film by mixing methylammonium iodide and lead chloride and spin-coating the solution along with a solvent, such as dimethylsulfoxide, onto the glass. They then heated the resulting film to temperatures ranging from 90 to 130 °C.

As the solution cooled, it formed droplets on the glass surface. As the solvent evaporated, the droplets yielded islands of crystalline material with empty spaces in between. The islands absorb photons and convert them to electrons, while the empty spaces let light pass through. The result was a transparent solar cell with a neutral, grayish tint that is more desirable for use in windows.

As the transparency of the film increases, energy-conversion efficiency decreases. The most transparent films, which let through about 30% of incoming light, converted light to electricity with efficiencies of 3.5%. The darkest films, only 7% transparent, had efficiencies near 8%. Snaith says the ideal coating would let through about half the light and have a 5% conversion efficiency. “We think there’s a lot of scope to improve it further,” he says. He’s formed a company, Oxford Photovoltaics, that hopes to commercialize a device by 2017.

Snaith says the next step is to determine the stability of the perovskite material. A practical solar cell should function for several years. But even if it stops generating electricity, the window containing the solar cell should maintain its color and transparency for at least a decade.

The new solar cell is “fantastic technology,” says Yang Yang, head of the organic electronic materials and devices group at the University of California, Los Angeles. Yang, who is also pursuing transparent solar cells for windows, says there are challenges to commercialization for perovskites, such as the use of lead and the cells’ sensitivity to moisture. But he finds the materials promising: “The rapid progress of efficiency is unprecedented in solar-cell technology.”