[+]Enlarge
Credit: Adapted from Nature
In RA-ICD, a molecule (paired circles) is resonance-excited (top), causing promotion of an electron (yellow dot) to an unoccupied orbital (horizontal line), release of an electron by Auger decay (middle), transfer of excitation to a neighboring molecule by ICD (squiggly arrow), and fallback of the promoted electron to a stable orbital. With RA-ICD, the energy and localization of neighbor-emitted electrons can be tightly controlled. 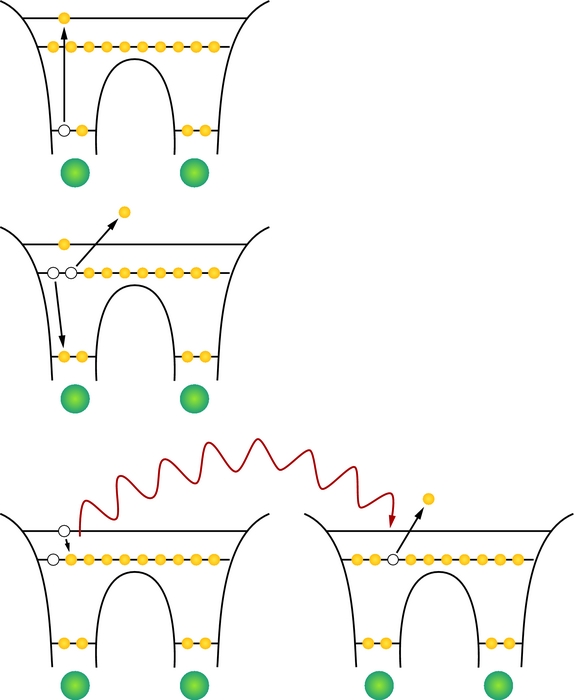 Credit: Adapted from Nature
In RA-ICD, a molecule (paired circles) is resonance-excited (top), causing promotion of an electron (yellow dot) to an unoccupied orbital (horizontal line), release of an electron by Auger decay (middle), transfer of excitation to a neighboring molecule by ICD (squiggly arrow), and fallback of the promoted electron to a stable orbital. With RA-ICD, the energy and localization of neighbor-emitted electrons can be tightly controlled.

One possible way to treat cancer is to attack it with low-energy electrons emitted by an energy-transfer process called intermolecular coulombic decay (ICD). The electrons can break DNA strands and thus could be used to kill cancer cells selectively. But using ICD therapeutically is not yet feasible. “There is most often too little control over the amount of energy transferred and the exact atomic or molecular sites where ICD takes place to make the process usefully exploitable,” says Francesco Tarantelli of the University of Perugia, in Italy. He is a member of the team led by Lorenz S. Cederbaum of the University of Heidelberg that discovered ICD in the 1990s.

Now, a group that includes Cederbaum has proposed an ICD variation that makes it more controllable. Another team has verified that the proposed technique works as predicted: It generates electrons with controllable energy, in a highly site-selective manner, and with enhanced yields. The studies move ICD-based cancer therapy closer to possible realization and could lead to a new technique for studying molecular structure.

In ICD, beams of photons, electrons, or ions are directed at atoms, causing excitation. The excitation induces the atoms, when in hydrogen-bonded or other loosely bound complexes, to emit electrons and transfer energy to neighboring species in the complexes. The neighbors then also emit electrons. In some cases, the initial electron emissions occur by a specific mechanism, called Auger decay.

Theoretical chemists Kirill Gokhberg and Alexander I. Kuleff of the University of Heidelberg and coworkers, including Cederbaum, have now used ab initio (first principles based) calculations to predict that excitation can induce Auger decay and ICD in a much more controllable way. The key is using a resonant beam, adjusted to a target atom’s exact energy levels, rather than a range of beam energies. They predicted that the technique, resonant-Auger ICD (RA-ICD), could be used to induce specific atoms in controllable locations to emit electrons with tunable energies (Nature 2013, DOI: 10.1038/nature12936).

Physicists Florian Trinter and Till Jahnke of Goethe University Frankfurt and coworkers collaborated with the Heidelberg group to show experimentally that RA-ICD indeed occurs as predicted: It generates at selective locations enhanced numbers of electrons with controlled energies compared with regular ICD (Nature 2013, DOI: 10.1038/nature12927).

A key implication of the two studies “is that the elementary processes by which radiation interacts with biological matter are far more complex than perceived up to now,” comments ICD specialist Uwe Hergenhahn of the Max Planck Institute for Plasma Physics, in Germany.

RA-ICD could lead to a new analytical electron spectroscopy technique to study molecular structure and could move ICD closer to anticancer use, Jahnke says. But “real-life applications are still very far away,” he adds. “A manifold of biological, medical, and technological problems will have to be solved first.”

Comments
Dr. Eloise P. Thomson, Ph.D. (January 7, 2014 11:19 AM)
I am very interested in this work because I am the theoretical chemist who predicted the development of advanced electron transfer processes, as can be facilitated controlled with scanning tunneling microscopy. I am very happy they made progress with controlling the Auger electron emissions for perturbing DNA of tumor cells. If,
possible, could one of members of the research team contact me.

Roger Howell (January 15, 2014 5:19 PM)
The potential radiobiological significance of ICD was discussed at the 2006 Symposium on Biophysical Aspects of Auger Processes (Int. J. Radiat. Biol., Vol. 84, No. 12, December 2008, pp. 959–975). There may be other applications for this process as well. ICD could potentially play a role in chemical radioprotection by transferring atomic vacancies – and thereby Auger electron cascades – away from radiobiologically sensitive sites.
Reply »