When chemists—or enzymes—try to create only one of a few possible products of a reaction, their strategy typically involves stabilizing the transition state that leads to the desired compound. In some cases, however, the route down an energy surface from a single transition state forks and forks again, leading to multiple products with no intermediate stops along the way.

That’s the case explored in a recent investigation of the biosynthesis of the tricyclic diterpene miltiradiene, a precursor to other natural products with anti-inflammatory, antibacterial, and anticancer properties. Salvia miltiorrhiza—commonly called red sage, Chinese sage, or tan shen—makes miltiradiene by using a diterpenoid synthase to convert dicyclic copalyl diphosphate into a tricyclic carbocation.

The carbocation then reacts to form a transition state that is followed by a downhill cascade of bifurcating pathways. It is “the most unusual potential energy surface I’ve ever seen,” says University of California, Davis, chemistry professor Dean J. Tantillo, who did the work with staff scientist Young Joo Hong. Together the pathways lead to 10 possible compounds (Nat. Chem. 2014, DOI: 10.1038/nchem.1843).

Yet the enzyme produces just one product. The key to its remarkable selectivity lies in how the molecules move as they traverse their downhill route. “The molecules wiggle as they go, and how they’re vibrating determines which way they fall down,” Tantillo says.

The fact that a plethora of products could form but don’t suggests that the enzyme plays a role not only in stabilizing the transition state but also in guiding subsequent molecular dynamics. “That’s revolutionary,” says Daniel A. Singleton, a chemistry professor at Texas A&M University. “The enzyme now has a different job to accomplish, not just making the energy barriers low but also controlling what happens afterward.”

BIFURCATION
[+]Enlarge
Credit: Robert Paton/U of Oxford
This route down a potential energy surface from a transition state splits into two paths to different products. 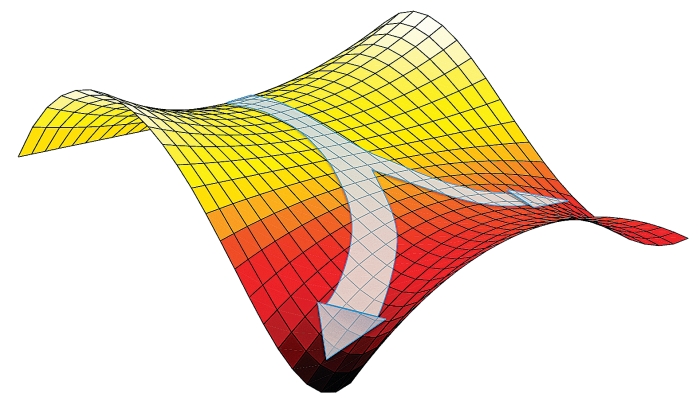 Credit: Robert Paton/U of Oxford
This route down a potential energy surface from a transition state splits into two paths to different products.

About 15 years ago, researchers started to identify organic reactions with bifurcating pathways akin to those observed for miltiradiene. One of the initial reactions recognized was the Diels-Alder dimerization of cyclopentadiene. Chemists had thought that competing transition states determined which cyclopentadiene acts as the diene and which acts as the dienophile, but further analysis demonstrated that the reaction has a single transition state followed by a bifurcating pathway (J. Am. Chem. Soc. 2002, DOI: 10.1021/ja016622h).

Bifurcating pathways surprised many chemists. For many years, they had thought that the transition state was a point along a straight path from reactants to products, says Kendall N. Houk, a chemistry professor at UC Los Angeles. “Bifurcations mean that once you pass the rate-determining transition state, several products can be formed,” with the exact shape of the potential energy surface and a molecule’s dynamics serving as critical determining factors in which products appear and in what fractions.

How many reactions are controlled in such a way is “tricky” to estimate, Singleton says. “I used to think that I was exaggerating when I said it would happen in 5% of reactions,” he adds. “Now I say 20%.”

In the miltiradiene case, Tantillo and Hong ran dynamics calculations starting from the carbocation transition state but without the enzyme. They found that the system theoretically yields mostly two compounds: miltiradiene and a natural product that hasn’t been previously reported. That result suggests that to some degree, the dynamics that lead to those particular products are inherent to the molecule, Tantillo says. The enzyme may then be modulating the dynamics to home in on miltiradiene. The key seems to lie in the orientation of the molecule through carbons 14, 13, 15, and 16.

Houk emphasizes that bifurcations present a “third way” to think about reaction mechanisms. The classic two approaches focus on whether a reaction occurs in a concerted, simultaneous manner or in a stepwise fashion. In both cases, transition states determine both the reaction rate and the products. “Now we have a third general class in which you form one bond and then additional bonding events occur after the transition state,” Houk says. The transition state still determines the rate constant, but molecular dynamics determine the products.

Tantillo and Hong’s results on miltiradiene show a “beautiful” example of the effects of bifurcation, Houk says. “The fact that this can be involved in a biosynthetic pathway is quite neat.”