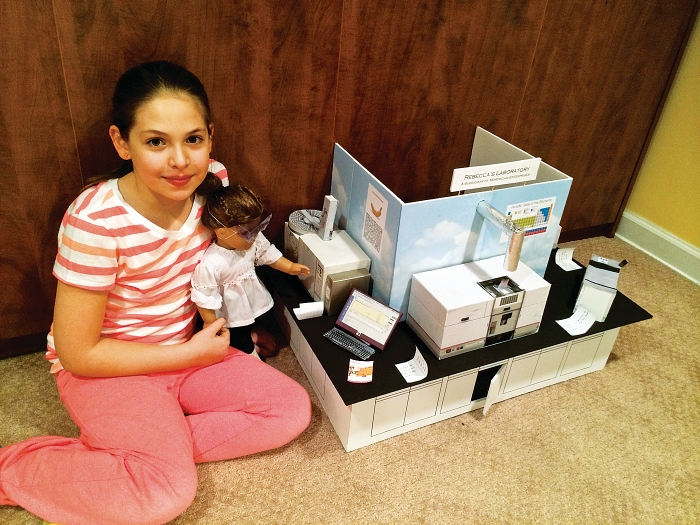 Some chemists may frown on playing with dolls in the lab, but not Charlie Abrams. He encourages it.

Last year, Charlie was searching for science accessories to go with his daughter’s doll, Rebecca Rubin of the popular American Girl doll collection. Unable to find what he was looking for, the professor of physical science and engineering at Chicago’s Truman College decided to work with his daughter, Elizabeth, to build a mini science lab for the doll. They began by constructing a model gas chromatograph/mass spectrometer out of foam board, paper, and equipment photographs.

“After we built the GC/MS, I thought it would just sit on my shelf, but to my surprise she actually played with it,” Charlie says. For instance, upon hearing her dad describe the instrument as “a way to know why someone might be sick,” Elizabeth and her friends set up a hospital bed for Rebecca and incorporated a GC/MS into the doll’s treatment.

Before long, Charlie and his daughter built an entire laboratory, complete with infrared spectrometer, atomic absorption spectrometer, and polarimeter. Charlie even dreamed up a game to make his daughter’s use of the laboratory more fun. In the game, a king has been poisoned and Rebecca must use the lab’s instruments to figure out the origin of the poison. Cards saying things such as, “Did someone switch the king’s medicine? Polarimetry can find the answer!” adorn the minilab to help Elizabeth in her quest.

Charlie claims that he wasn’t trying to nudge his daughter into a career in the sciences when he built the diorama, but he admits that he’s tickled by Elizabeth’s fascination with the toy set. “She is the only nine-year-old I know who can pronounce ‘gas chromatograph/mass spectrometer,’ ” he says. “She describes it as something that can answer, ‘What is that smell?’ Yesterday, she handed me a shampoo bottle and asked if I could put it in the GC/MS.”

He continues, “I don’t think she has any idea that there was a time years ago when women and girls were discouraged from the sciences.”

A nine-year-old may not remember such gender inequality, but E. Ann Nalley certainly does. Upon hearing Charlie’s story at a recent meeting of the American Chemical Society Chicago Section, the professor of chemistry at Cameron University, in Lawton, Okla., couldn’t help but recall an idea she presented to the ACS Board of Directors in the late ’90s to encourage more girls into the sciences: a Barbie the Chemist doll.

For her presentation to the ACS Board, Nalley prototyped a Barbie complete with lab coat, safety glasses, low-heeled shoes, and tied-back hair. Nalley then pitched a partnership with Mattel, the company that makes Barbie, to build a chemistry lab play set “with beakers and test tubes and a Barbie Jet so that she could fly around the world and visit her global laboratories,” remembers Nalley, who would go on to become the 2006 president of ACS. In addition, “each little girl who purchased a Barbie the Chemist would have a little certificate of membership in ACS and a complete description of what ACS is and how chemistry makes our world better.”

Unfortunately, Nalley’s proposal didn’t move past the board. Since then, however, Mattel has made strides in offering more scientifically focused toys, such as a recent doll that imagines Barbie as a Mars astronaut—certainly a far more inspirational message than the infamous talking Barbie of the early ’90s that bemoaned, “Math class is tough.”

Science Communication
Chemistry spelled out on vanity plates and Barbie gets a science makeover for kids’ meals
Outreach
STEM scouting and snack-food infernos
Periodic Table
A periodic table of signal flags
Share X
To send an e-mail to multiple recipients, separate e-mail addresses with a comma, semicolon, or both.
Title: Dolled-Up Laboratory, ACS Ambassador Barbie
Author: Jeff Huber
Chemical & Engineering News will not share your email address with any other person or company.