Interactive: Find more data and compare currrent stats with those for 2011–12, visit http://cenm.ag/wfclty.

Just two months ago, the absence of any women on the preliminary list of speakers for next year’s International Congress of Quantum Chemistry prompted a threatened boycott of the event. Theoretical chemists Emily A. Carter of Princeton University; Laura Gagliardi of the University of Minnesota, Twin Cities; and Anna Krylov of the University of Southern California led the effort (C&EN, March 3, page 3).

The incident throws into stark relief the fact that remarkably few women are employed as chemistry professors, particularly at the universities that spend the most on chemical research. Still, according to data recently collected in partnership with C&EN, women’s share of faculty positions continued to inch higher last year, although that rise was limited to assistant professor jobs.

At the top 50 schools in terms of chemical R&D spending, women held just 18% of the tenured and tenure-track positions in the 2012–13 academic year. That number was up only slightly from the prior academic year’s 17% level, but it represented considerable progress over the 12% share of a decade earlier.

Breaking the numbers down by seniority reveals some dramatic disparities. Women’s share of assistant professor slots jumped from 26% in 2011–12 to 30% in 2012–13. Over that same period, women’s share of associate and full professor positions remained unchanged at 24% and 13%, respectively. The statistics were gathered by the Open Chemistry Collaborative in Diversity Equity (OXIDE), which works with research-intensive chemistry departments to broaden faculty diversity.

“We can take heart in the fact that we’re continuing to make progress, but the pace remains too slow,” says Rigoberto Hernandez, OXIDE director and a chemistry professor at Georgia Institute of Technology. Hernandez has served on a number of policy-making boards with Georgia Tech, the National Academies, and the American Chemical Society (which publishes C&EN) to try to help universities achieve diversity equity.

Women have earned more than 25% of chemistry Ph.D.s since the mid-1980s, with that figure reaching 37% for 2012, according to the National Science Foundation’s Survey of Earned Doctorates. Since the mid-1980s, four to five tenure cycles have passed, notes Shannon Watt, OXIDE’s research and program manager. “All things being equitable, that should translate to women being approximately 25% of full professors,” she says. “The data clearly demonstrate that this is not the case.”

The findings serve as “a call to action for chemistry departments to take a more active role in changing the climate and thereby the demographics,” Hernandez says. 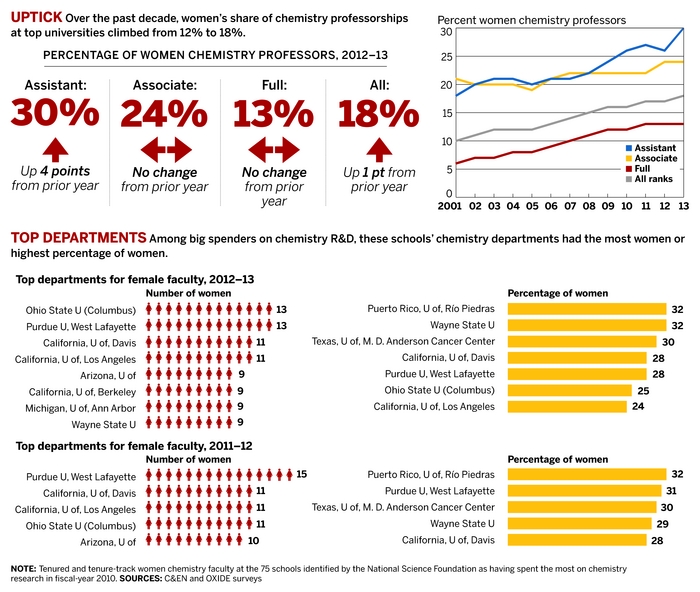 The deficit of women professors won’t fix itself, agrees Rice University sociologist Erin A. Cech, who studies inequality within the science, technology, engineering, and math (STEM) professions. She suggests that chemistry departments address the issue by openly discussing it.

One topic they might discuss is the “flexibility stigma” associated with people who make use of flexible work arrangements, such as taking a semester off to have a child. The stigma—which can harm career advancement and can make faculty reluctant to use these arrangements—“can be detrimental for women in particular,” Cech notes. She and Mary Blair-Loy, a sociologist at the University of California, San Diego, explored these issues further in a recent article (Work and Occupations 2014, DOI: 10.1177/0730888413515497).

Another hurdle that particularly affects the advancement of women into academic careers is the need for graduate students to move to another city, or even across the country, for a postdoc position and then to move again for a faculty position, Cech says. “Women academics are less likely to move their families to pursue a new job than men academics.” Often that’s because a man’s career is regarded as the primary career in a family, she explains. So women may be more likely than their partners to opt to avoid this hurdle by working in industry. “This suggests the need for more extensive arrangements for dual-career academic couples, even at the postdoc level,” Cech says.

C&EN has been counting women on faculties every year since 2000, focusing on those positions for which a chemistry department paid at least half the salary. For each of those years, C&EN published data on the 50 or 75 schools that spent the most on chemical R&D, as listed in the most recent NSF ranking available in a given year.

Arguably, these selection criteria have some flaws. For example, NSF’s ranking makes no distinction between schools that have chemistry-only departments and those with departments that combine chemistry with another subject, such as biochemistry. Also, selecting a certain number of schools to profile excludes plenty of schools where women hold a greater share of professorships. That said, the data collected from these universities do give a sense of long-term trends.

The organization surveyed schools that topped NSF’s list for 2010, the most recent year available when the latest survey began. Data on the top 75 schools appear in the tables in this story; data on additional schools are available on the OXIDE website (http://b.gatech.edu/1pEysfm).

The survey showed that the University of Puerto Rico, Río Piedras, and Wayne State University had the highest percentage of female chemistry professors in the 2012–13 academic year, at 32%. Ohio State University, Columbus, and Purdue University, West Lafayette, Ind., had the greatest number of women faculty, 13.

Perhaps surprisingly, OXIDE found in a separate study that women are at least as well represented in the ranks of chemistry department chairs (17%) as they are among full professors, indicating that women are attaining at least the first rung of academic leadership positions, Watt says.

OXIDE is also gathering data on other aspects of diversity, including race and ethnicity. Its objective is to establish diversity equity—no matter how it’s categorized—within the leading research-active chemistry departments, Hernandez explains.

OXIDE is working with department chairs and their representatives to achieve these goals. “The chairs have been heavily engaged in OXIDE’s National Diversity Equity Workshops, and we have some evidence that this is leading to significant steps,” Hernandez says. For example, several departments have created diversity committees, and some have widened their faculty searches to reach broader pools of applicants.

One way to do so is to “actively seek out faculty applications from women,” Watt suggests. “For example, when you see a female postdoc give a great talk at an ACS meeting, let her know your department is conducting a search, and encourage her to apply.”

In the meantime, “while very few departments now have only one woman on their faculties, there still remain several that have only one female assistant professor in a pool of more than four or five,” Hernandez says. That’s a problem because such conditions present additional barriers to success, he says.

For example, because of their small numbers, women are overburdened by service roles for which they receive little credit, such as service on committees that must be staffed with diverse voices, Hernandez notes. This “service tax” can make it harder for women to advance their primary research and teaching duties, he says.

“There are also data showing that the barriers encountered by female faculty have an impact on the career aspirations of female graduate students and postdoctoral researchers, who look to the faculty as role models and indicators of what the graduate students’ and postdocs’ lives could be like if they were to pursue tenure-track positions,” Watt cautions.

Departments can make use of several resources to support women faculty. They include ACS’s Women Chemists Committee; the society’s Women Chemists of Color initiative, which builds community, provides resources, and advocates for minority women chemists; and the independent Committee on the Advancement of Women Chemists, known as COACh.

Organizations that aren’t specifically focused on chemists include the Women in Science & Engineering Leadership Institute at the University of Wisconsin, Madison, which aims to promote participation and advancement of women in science and engineering and offers a guidebook for search committees, among several other resources; NSF’s Increasing the Participation & Advancement of Women in Academic Science & Engineering Careers program, known as ADVANCE; and the Center for Research on Gender in the Professions at UC San Diego. Comments
Chris (April 14, 2014 1:03 PM)
Women may not overwhelmingly want to go into faculty positions in chemistry. Academia itself is insular and bureaucratic; it might be that women opt to pursue careers ("even" careers in child-rearing) elsewhere. This article, and those of its ilk, seem to point to a sex- or other immutable-attribute-differential in career choice as a bad thing, as a problem to be remedied. I would point out that other careers options are light in women: serial killers, for instance, under-represent women and especially, in the West, minority women. If career parity is the end goal, we should aim for parity across all careers. Unless, of course, careers are the result of circumstance and inclination, and therefore not something we ought impose on people blindly.

The question ultimately remains: should we, or should we not, tell women what they ought to do?

Silly me, I have a hard time keeping this straight these days; I am strongly opposed to mandating "acceptable" options for women, yet the zeitgeist would suggest that I am in the minority.

Mary (April 25, 2014 4:32 PM)
As long as women can freely choose and are not continually discouraged, Chris is right. However, Chris asserts:

Academia itself is insular and bureaucratic; it might be that women opt to pursue careers ("even" careers in child-rearing) elsewhere.

Why is academia insular and bureaucratic? And why do those traits negatively impact women and other people from under-represented groups more so than white males? It's time to change the bureaucracy and increase transparency of the processes that lead to success for both genders.