CHEMISTRY SET ON A CHIP
Credit: Courtesy of Manu Prakash
In this clip, the hand-cranked prototype that won the SPARK competition "reads" the holes in a punch card passing under its pin-covered mechanism. When a pin slots into a hole, the device pushes colored fluid through a corresponding channel on the device's microfluidic chip. In this way, the tiny machine can mix together nanoliter quantities of chemicals and carry out safely contained, programmed reactions.

Carbocation chemistry guru George A. Olah started a fire in the basement with his. DNA amplification pioneer Kary B. Mullis set off the contents of his with a dynamite fuse from the local hardware store. And Intel cofounder Gordon E. Moore used his to make rockets in his parents’ shed.

MUSCLE POWER
Credit: Robi Soetedjo
In this clip, Soetedjo's son demonstrates the bioelectricity toy prototype that won second place in the SPARK competition. When he flexes his forearm, he’s able to generate noise, turn on a light, and spin a propeller wired to a circuit

These and many other renowned scientists credit childhood chemistry sets with inspiring their lifelong passion for tinkering in the lab. “I doubt you could interview a chemist between the ages of 50 and 80 today who didn’t get started with a chemistry set,” says Robert Bruce Thompson, author of the “Illustrated Guide to Home Chemistry Experiments.” “Maybe there are exceptions, but I can’t think of any.”

The trouble is, the chemistry sets that Moore and Mullis played with as youngsters don’t exist anymore. Worries about toy safety and litigation mean that most of today’s kit makers include few—if any—chemicals in their products. The glassware and alcohol lamps that accompanied sets in the 1940s and ’50s have disappeared too.

THEN & NOW
Credit: Gregory Tobias
Worries about safety pushed kits such as the ChemCraft chemistry set (circa 1950, above) into extinction. Devices like the winning prototype in the SPARK competition (below), where all the chemicals are contained within a microfluidics chip, might be the chemistry sets of the future.
Credit: George Korir

“This generation of kids doesn’t have the opportunity to mess around, get their hands dirty, and get excited about science,” says Janet Coffey, program officer at the Gordon & Betty Moore Foundation.

Coffey and others at the Moore Foundation are committed to giving that experience to adolescents, but they also recognize that the chemistry set of the 20th century can’t be resurrected in today’s risk-averse society. So they teamed with the Society for Science & the Public and launched a competition last October to find an equivalent of the kit for this century. The Science, Play, And Research Kit (SPARK) contest challenged participants to tap into the spirit of the chemistry sets of yore and design a product capable of hooking the current crop of teens and preteens on science.

By the competition’s deadline of Jan. 7, participants had submitted 125 entries, which were judged by a panel of scientists, engineers, and educators. Last week, the organizers unveiled the winners, who will collectively receive $136,000 in prizes for prototypes or “ideations” they submitted. The latter are ideas that haven’t yet been developed into products but that have been fleshed out enough to be plausible. 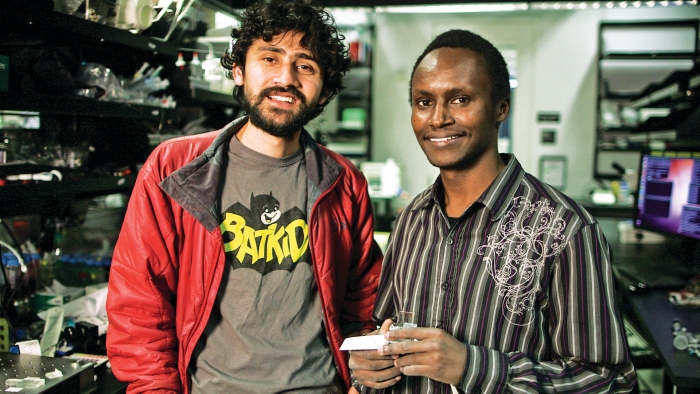 Credit: Kurt Hickman
Prakash (left) and Korir won the top prize of the SPARK competition for their punch-card “lab-on-a-chip.”

The SPARK contest’s top prize, for first-place prototype, went to Manu Prakash, a bioengineering professor at Stanford University, and his graduate student George Korir. The pair fabricated what the competition organizers say could “literally be a 21st-century chemistry set.” The device combines a plastic microfluidic chip with a hand-cranked revolving cylinder covered with pins. The pins “read” a punch card designed by a user. When a pin aligns with a hole in the punch card, it triggers a pump or valve within the microfluidic chip to release and mix chemicals stored within.

Prakash says he got the idea for the device when his wife brought home a music box from a holiday gift exchange at work. “She gave it to me, knowing that I’m a tinkerer,” he says. Music boxes produce tunes when their rotating pins pluck the teeth on a metal comb nearby. One day, Prakash says he was pondering the contraption when it hit him: “This is a fantastic mechanism for programming chemistry.”

One of the reasons chemistry sets were so popular in their heyday was that parents could afford them. Prakash says his punch-card-programmed device will be inexpensive too—and safe. The chemicals, in nanoliter quantities, would all be contained within the microfluidic “lab on a chip.”

With the device, kids can carry out color-change reactions such as titrations, and they can trade punch cards, just as they would trade baseball cards, Prakash says.

Because half of the Stanford professor’s research group is focused on putting simple scientific tools into the hands of the public, he also sees his invention one day being used in developing countries to diagnose disease. A clinician could crank the low-cost, portable machine to run multiple assays on a patient’s blood sample, Prakash says. “Instruments that you design for global health have immense opportunities in science education, and vice versa.”

Robijanto (Robi) Soetedjo, the second-place prototype winner in the SPARK contest, also focused on health with his submitted device. A neurophysiologist at the University of Washington, Seattle, Soetedjo originally built the toy for his son’s science fair. “I wanted to introduce the kids to the coolness of neuroscience,” he says.

So he combined a toy circuitry kit with an electronic amplifier he built with parts from RadioShack. Then Soetedjo added electrodes like the ones a doctor attaches to a patient’s chest to record an electrocardiogram.

The finished device converts the electrical activity, or “bioelectricity,” of kids’ muscles into visible and audible cues. An electrode stuck to a child’s forearm, for instance, transmits a signal to the circuit and turns on a lightbulb or revs a noisy motor when the youngster flexes.

Soetedjo hopes that his kit can bring science alive for this generation of youngsters in the way that chemistry sets did for past ones. “So many things attract kids’ attention today—video games, tablet computers,” he says. “If science can’t compete for that attention, I think we all lose.”

Other SPARK prototype winners include kits for making conductive inks and color-changing fabrics and an all-in-one sensor that allows children to measure temperature and other types of data.

The top award in SPARK’s ideation category went to David M. Gertler, a manufacturing engineer with Makani Power, an avionics firm recently acquired by Google X. Gertler, who will receive a $5,000 prize, proposed the “Survival Shelter Science Project,” a plywood box containing materials such as corrugated plastic, LED lights, and solar cells. Students would use the contents, along with their smarts, to build a shelter, supply it with power, and purify water.

“We were excited about the outcome” of the SPARK contest, says Coffey, who got the idea for the competition from Gordon Moore’s tales of childhood mischief. “The diversity of our entries really showed us that there is a broad audience who cares about children’s exposure to science-rich activities.” In addition to doling out prize money, Coffey says, the Moore Foundation and the Society for Science & the Public want to help the winners make business connections so that their prototypes and ideas move toward the market.

Thompson, author and home-science advocate, won an honorable mention for the “Earth and Space Science Kit” he submitted to SPARK. He has fond memories of the big chemistry set he got in 1964—one he’d pored over in the Sears Holiday Wish Book. He says he’d like nothing more than for today’s kids to feel that same excitement for science. If anything can make that happen, he contends, “it’s efforts like SPARK that are going to do it.” 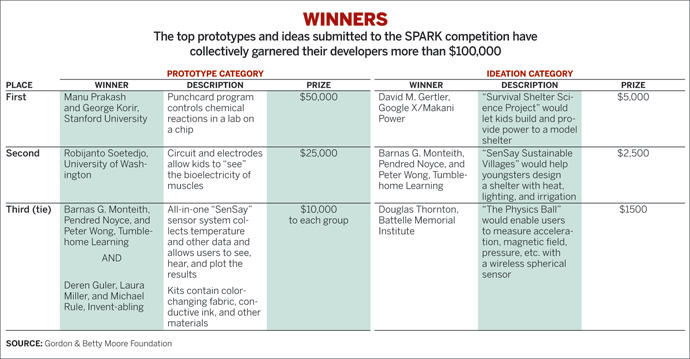 There’s An App For That: The Virtual Chemistry Set 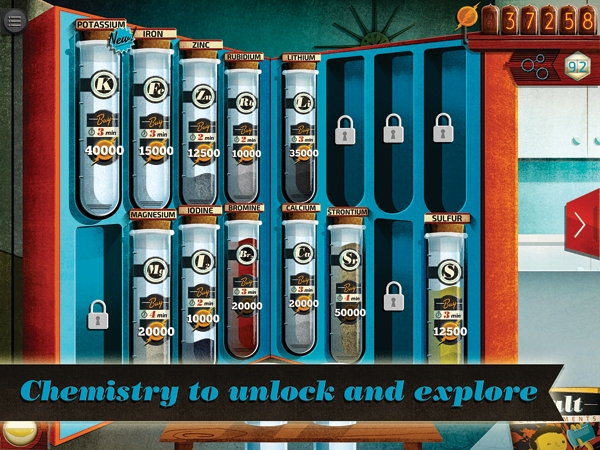 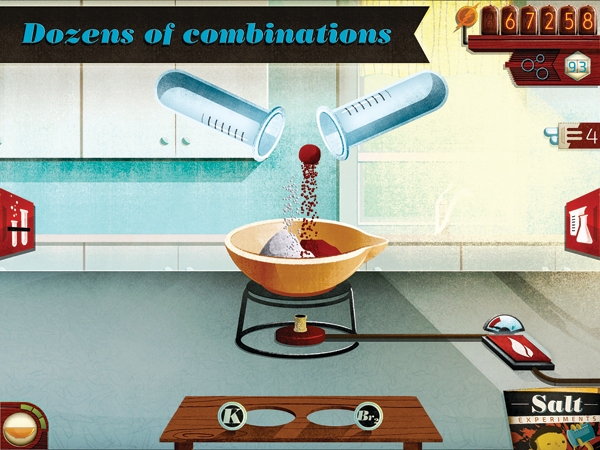 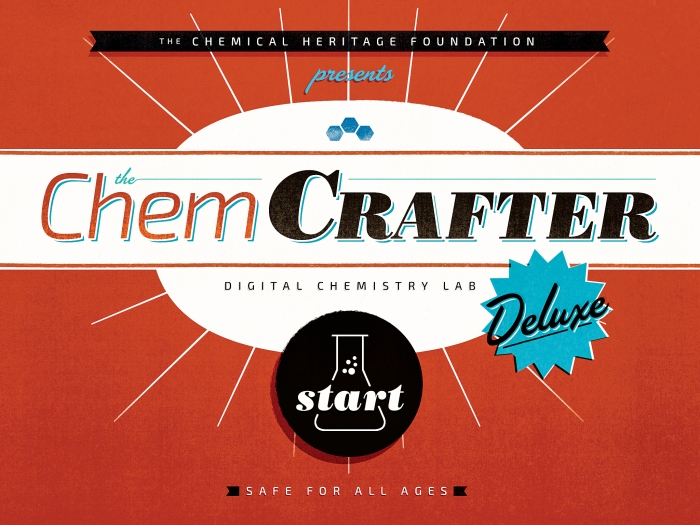 These days, most chemistry kits are mere shadows of their predecessors from the 1940s and ’50s. Gone are the chemicals that produce flashes, bangs, and smells. In their place are substances that make innocuous shampoos and slimes.

But that hasn’t stopped the Chemical Heritage Foundation, in Philadelphia, from trying to give today’s kids the thrill of randomly mixing chemicals to see what happens. CHF’s new ChemCrafter app for the iPad allows users to purchase test tubes full of elements and containers of acid, combine them, and ignite things at will—all in the safety of a stylized virtual lab.

As CHF staff began building the app a few years ago, they quickly realized that digital explosions alone weren’t enough to hold kids’ interest. Compared with real-world flashes and bangs, virtual ones are commonplace and “just aren’t as compelling,” says Shelley Wilks Geehr, director of CHF’s Roy Eddleman Institute. So Geehr and her colleagues made ChemCrafter into a game.

Guided by Wally Waters, Audrey Acids, and Samuel Salts, players must conduct a series of experiments to earn points, bonuses, and even badges they can post on Game Center, Apple’s social gaming network. Points unlock glassware and chemicals—the ones that react most violently are most expensive—so gamers sometimes have to rerun less exciting reactions so that they earn enough to move on. As reactions become more difficult to carry out, users are also rewarded with historical videos and factoids.

“We had to put in a little history,” Geehr says of the chemical history buffs at CHF. “We couldn’t stop ourselves.”

To download a pdf of this article, visit http://cenm.ag/chemistryset.

Science Communication
Chemists are finding their place on TikTok
Periodic Table
Element collecting: A niche hobby that connects people to chemistry
Outreach
Crazy Christmas chemistry
Share X
To send an e-mail to multiple recipients, separate e-mail addresses with a comma, semicolon, or both.
Title: The 21st-Century Chemistry Set
Author: Lauren K. Wolf
Chemical & Engineering News will not share your email address with any other person or company.