Credit: AAAS/Science
The new elastomer network is both soft and strong.

Elastic polymers, or elastomers, are desirable materials because they can repeatedly de-form and re-form. But this softness often comes at the expense of mechanical strength, which the materials need to resist fracture under heavy loads. A new kind of tough elastomer that remains malleable is now on the horizon, thanks to a two-part polymerization strategy reported in Science (2014, DOI: 10.1126/science.1248494).

First developed for strengthening hydrogels, the strategy was long thought to be limited to these water-based polymers, says Costantino Creton of ESPCI ParisTech, in France, who led the research.

Creton’s route to strong yet soft elastomers is a welcome one, comments Zhigang Suo, a materials scientist at Harvard University. He says the resulting elastomers could be useful in established applications, such as sealants or tires, as well as in emerging ones, such as robotics, environmental monitoring, and energy-harvesting systems.

Until now, elastomers for demanding applications, such as automobile tires, have been toughened up with additives such as carbon black nanoparticles. “However, adding these fillers may cause complications in processing,” Suo says.

The fracture energy, the unit of strength for elastomers and other materials, for each of the component polymers used in this hybrid elastomer is low: approximately 1 J/m2 and 10 J/m2, respectively. But the fracture energy of the hybrid is about 1,000 J/m2. The results indicate that at normal temperatures the hybrid elastomer is just as strong as standard elastomers with nanoparticle-embedded reinforcements. But at higher temperatures, above 100 °C, at which many standard reinforced elastomers fail, the hybrids may have an edge, Creton says.

When making the new elastomer, Creton’s team also devised a general strategy that will be “valuable for studying stiffening and toughening mechanisms,” Suo says. The key is a butanediol diacrylate linker (called ­BADOBA) incorporated into the first, stretched ethyl acrylate network. When the network is subjected to mechanical force, these links break and fluoresce with blue light. This visualization strategy, which could also work in double-network hydrogels, gives materials scientists a long-awaited way to characterize elastomer networks, Creton says. Other analytical techniques, such as optical and electron microscopy, are not applicable to such materials, he notes. 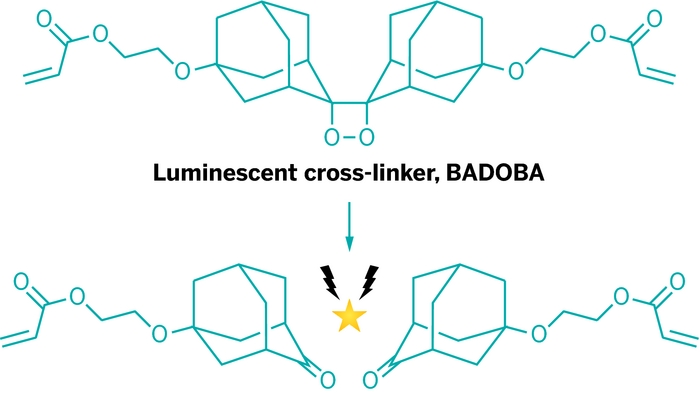 Electronic Materials
Chemistry in Pictures: Blooming brilliant
Ionic Liquids
Chemistry in Pictures: Papa’s got a brand new solvent
Materials
Fluorescent materials are the brightest ever made
Share X
To send an e-mail to multiple recipients, separate e-mail addresses with a comma, semicolon, or both.
Title: Toughening Up Elastomers
Author: Sarah Everts
Chemical & Engineering News will not share your email address with any other person or company.