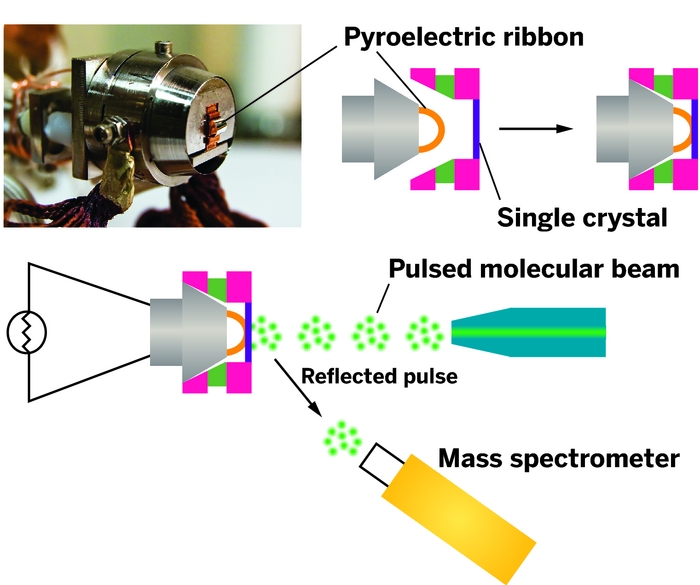 Credit: Charles Campbell/U of Washington
To quantify the heat evolved as molecules bond to a solid surface, an adsorption calorimeter head with a heat-sensing pyroelectric ribbon (4 mm wide) is moved into contact with a single-crystal specimen (top). The crystal is exposed to gas pulses and reflected pulses are analyzed by mass spectrometry.

Like someone who finally sits after a long, tiring day of standing, gas-phase molecules breathe a sigh of relief, so to speak, as they “take a seat” (adsorb) on solid surfaces. The sigh comes in the form of a momentary pulse of heat that the molecules “exhale” as they form surface bonds.

The quantity of heat released in that exothermic process is a measure of adsorption bond strength. The strength of the surface bond directly influences numerous surface processes, including those central to catalysis, electrochemistry, and other industrial technologies. If the bond is too weak, the molecule won’t stick to the surface. If it’s too strong, the adsorbate will be trapped and unable to diffuse across the surface and react, as required, for example, in petrochemical refining, automobile emissions catalysis, and other surface chemical processes.

Knowing the detailed energetics of adsorption is crucial to improving numerous surface technologies, but very few experimental techniques can measure those values directly. One of the only viable lab methods is single-crystal adsorption calorimetry (SCAC). Some practitioners of that technique gathered in Dallas last month at the American Chemical Society national meeting to share their latest findings. In symposia sponsored by the Division of Physical Chemistry and the Division of Catalysis Science & Technology, they reported on topics including newly discovered trends in surface bonding, thermodynamics of reaction intermediates, and nanoparticle catalysis.

SCAC has been around for more than a dozen years. The principles are straightforward, yet the technique is not practiced widely. One reason for the low popularity is that unlike adsorption calorimeters designed for analyzing powdered samples, instruments for single-crystal studies are not available commercially because of the small market size and “they’re difficult to build,” says Charles T. Campbell, a surface chemist at the University of Washington, Seattle. 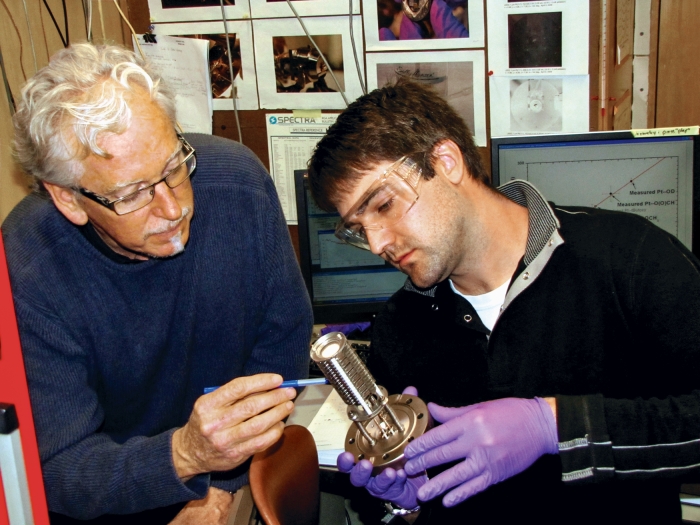 Campbell, who has built a few of these instruments, explains that the benefit of using single crystals, as opposed to powders, is that the results are much easier to interpret in a detailed way. That’s because the nature of the crystal surface—its structure and the types of binding sites present—is well characterized. In contrast, powdered samples consist of enormous numbers of crystallites with various surface structures and properties, which leads to a broad distribution of heats of adsorption. Similar shortcomings limited the ability of scientists decades ago to interpret adsorption calorimetry data measured on coarse, thin metal films.

Another way scientists have traditionally tried to understand the nature and strength of surface chemical bonds is by exposing a cold surface to a gas and then warming the surface until the adsorbed gas molecules acquire sufficient energy to leave, or desorb from, the surface. The desorption temperature is related to bond energy.

That method works well only in completely reversible chemical systems, notes Hans-Joachim (Hajo) Freund, a professor and director of the Fritz Haber Institute of the Max Planck Society, in Berlin. But many gas-solid systems are irreversible: Gases dissociate on contact with a catalytic surface, Freund explains, or they react and undergo rearrangements during the desorption experiment. As a result, surface bond energies of reactive molecules cannot be studied this way.

So Campbell, Freund, and other researchers have built their own SCAC units, and they’re using them to uncover new phenomena in surface chemistry. Campbell’s group, for example, recently studied the energetics of three oxygen-containing molecular fragments (–OR) bound via the oxygen atom to a commonly studied platinum crystal surface known as Pt(111). They found that the Pt(111)–OR bond energies for those fragments, –OH, –OCH3, and –O(O)CH, vary linearly (with a slope of 1.0) with the well-known H–OR bond energies of the corresponding gas-phase molecules: water, methanol, and formic acid, respectively (J. Am. Chem. Soc. 2014, DOI: 10.1021/ja500997n).

“This is a simple trend with powerful predictive ability,” Campbell says. H–OR bond energies for many species, such as ethoxy, propoxy, butoxy, and tert-butoxy are well-known. Now researchers can use the linear relationship revealed in the study to predict how strongly those fragments will bond to a catalytic metal such as platinum.

The absolute and relative values of these thermodynamic properties are helpful in explaining the roles of reaction intermediates and predicting surface reaction mechanisms, such as those central to the chemistry of formic acid fuel cells. Yet until now, researchers have never made these kinds of surface measurements.

SCAC is making its debut in other technologically important areas, such as nanostructured materials. Real-world catalysts often consist of precious-metal nanoparticles dispersed on a solid oxide. As the catalysts age, the particles sinter and coalesce, which alters their structures, sizes, and catalytic properties. The dependence of gas adsorption energetics on particle size directly influences a catalyst’s performance. But that dependence was never measured directly, until just recently.

Swetlana Schauermann, a postdoctoral researcher working with Freund, and her coworkers prepared a series of samples of palladium nanoparticles on Fe3O4/Pt and examined them via scanning tunneling microscopy. Particles within a single sample were uniformly sized. The team tailored the procedure batch to batch to make samples with sizes ranging from roughly 2 to 8 nm in diameter. Then, on those particles, the researchers studied the adsorption energetics of oxygen and carbon monoxide, which play a central role in large-scale processes, such as CO cleanup in automobile emissions catalysis. They found that the heat of adsorption depends on more than one parameter. But if all else is held constant, reducing the particle size decreases the binding energies of O2 and CO (Angew. Chem. Int. Ed. 2013, DOI: 10.1002/anie.201209476).

In other groundbreaking studies, a team headed by Rolf Schuster of Karlsruhe Institute of Technology, in Germany, applied SCAC to help explain the complex electrochemical reactions that govern battery performance. In one investigation, the team deduced the detailed energetics of silver deposition from aqueous solutions on a silver electrode (Electrochim. Acta 2013, DOI: 10.1016/j.electacta.2013.06.056). And in a study of lithium-ion batteries, they probed the analogous Li-deposition processes from liquid organic solutions (Angew. Chem. Int. Ed. 2013, DOI: 10.1002/anie.201305508).

SCAC is a unique method that provides a way to directly quantify surface properties that often have only been estimated via quantum calculations. It also offers a way to evaluate the accuracy of those computational techniques. This type of calorimetry has a reputation for being a powerful but challenging technique. Perhaps the method’s recent successes will convince more scientists to climb aboard.