Automakers Look To Adhesives And Aluminum For Gas Savings

New materials are proving to be a potent design combination 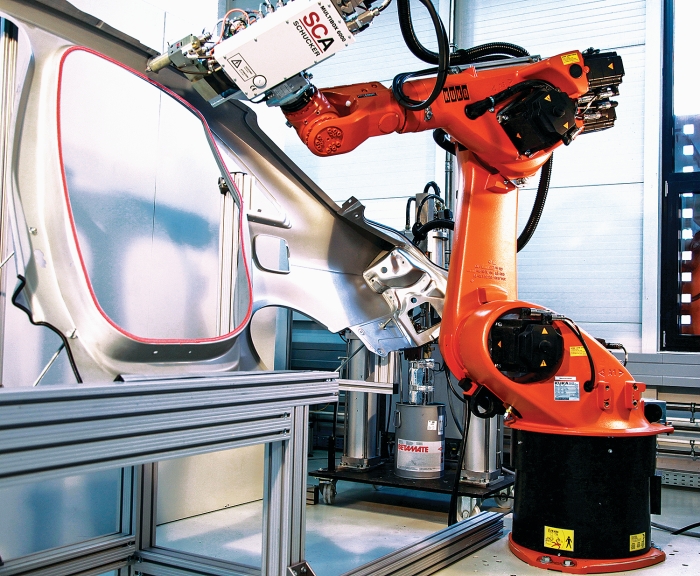 Credit: Dow
A robot applies glue to a car window, a scene that will be repeated at a growing number of automotive assembly lines.

Ford Motor Co. and General Motors are now building cars the same way kids make their plastic model counterparts: They are gluing them together.

The automakers aren’t cutting corners to reduce costs. Structural adhesives can cost more than welding or riveting. And contrary to what the average person might think, adhesives make for more durable bonds, which car companies like. Moreover, adhesives help automakers replace steel with lighter-weight aluminum, leading to meaningful improvements in performance and fuel economy.

Greater use of aluminum is essential if automakers are to meet increasingly stringent U.S. fuel standards. For instance, small vehicles will need to get more than 50 miles to the gallon by 2022, up from 38 miles today. More aluminum also means more use of adhesives, which is good news for the chemical companies that supply them.

The 2014 Cadillac CTS shows the potential of what adhesives and aluminum can do together. The car is 250 lb lighter—and yet 5 inches longer—than the 2013 model. The 7% weight savings reaps the car an extra mile per gallon of gas. “We achieved it by using the smartest materials for each and every application on every part, from bumper to bumper,” says David Leone, Cad­illac’s chief engineer.

For the luxury car brand, the performance benefits of a lighter car go beyond mere fuel economy. “Seven percent of my weight is about 12 lb,” Leone says. “And if I took off another 12 lb, I would be faster, I’d be quicker, and I’d feel better. So, too, do our cars.”

Aluminum deserves some of the credit for the weight reduction, and although Leone doesn’t know exactly how much, he is happy to provide examples. The doors are aluminum instead of steel, a change that alone represents about 55 lb. Also, Cadillac switched from magnesium to aluminum for its front instrument panel. Magnesium is the lighter metal, but with aluminum, Cad­illac engineers could design the part out of a hollow tubular structure, saving 7 lb.

Cadillac isn’t alone. Audi, Mercedes-Benz, and Tesla Motors are among the luxury carmakers that have been using aluminum extensively for years. Car companies are also designing aluminum into their larger vehicles. Ford’s use of aluminum will help lighten the 2015 F-150 pickup truck, which has been the best-selling vehicle in the U.S. for the past 32 years, by 700 lb.

The auto industry has been influenced by the aerospace and commercial vehicle industries, which have already adopted the technology. “Years ago, if you saw a school bus, it had thousands of rivets in it,” says John Psiakis, automotive manager for Chemetall, a metal surface pretreatment specialist. “Now if you look at a school bus, a lot of it is glued together, and the glue is actually stronger than all the rivet points.”

Some of the most common adhesives used in the automotive industry are polyurethanes, epoxies, and, to a much lesser extent, acrylics, according to Jordan Howard, product manager for Ashland’s Pliogrip adhesives business.

The elastic properties of polyurethanes make them ideally suited for joining dissimilar materials with different thermal expansion properties, such as aluminum and carbon fiber composite. Such bonding is actually more common in cars than bonding aluminum to aluminum, Howard notes.

The temperature resistance of epoxies, Howard explains, is needed when the parts will be exposed to excessive temperatures, such as those inside automotive electrophoretic coating lines, which can reach more than 180 °C.

Using adhesives, especially on aluminum, isn’t as simple as opening up a tube and squeezing out glue. Aluminum is a tricky metal to weld, and it isn’t the easiest material to bind with adhesives either.

The surface of bare aluminum is naturally covered with aluminum oxide, explains Sina Ebnesajjad, president of FluoroConsultants Group and an author of books on adhesives.

“Aluminum oxide is not bonded very strongly to the surface of aluminum,” he says. Because the thin layer can hinder an adhesive, aluminum is pretreated to remove it. The pretreatment also cleans the aluminum, etches greater surface area to create anchor points for the adhesive, and coats the surface to make it more compatible with the adhesive.

Pretreatment has seen a lot of new chemistry, according to Chemetall’s Psiakis. For years, chromium-based treatments were the standard-bearer, but they are being phased out for environmental reasons. Companies such as Chemetall have replaced them with silanes, titanium-zirconium, and other materials.

As part of its aluminum promotion efforts, aluminum maker Alcoa recently came out with its own new pretreatment technology, dubbed Alcoa 951. The company is licensing it to other aluminum manufacturers and to Chemetall, which is making and formulating Alcoa 951.

Alcoa won’t say much about Alcoa 951, other than that it’s organic, rather than a heavy metal, and that it offers more bond durability than titanium-zirconium. A “self-assembling molecule” is how Psiakis describes it. “Alcoa 951 bonds really well with the adhesives the auto companies have chosen to bond with,” he notes.

The new surface treatments come at a good time for automakers, which have many reasons for wanting to replace rivets and spot welding with adhesives.

First among these is stiffness. Structural adhesive is applied in a line, not at points as with spot welds. The forces the joint has to withstand are distributed more broadly, making the car safer and more durable, according to Tonja Sutton, a marketing manager at adhesives supplier Dow Automotive Systems. Adhesives also reduce vibration and noises.

Moreover, the stiffness frees car companies to make vehicles lighter. “Every time you have a rivet or a spot weld, you have a very high stress concentration point,” says Mansour Mirdamadi, chief engineer for Dow Automotive. “And when you add adhesive in those areas, you have reduced the stress concentration” and thus don’t need to switch to stronger, heavier components. Adhesives can improve auto body stiffness by 15–20% over welds and rivets, he notes.

Adhesives are also more corrosion resistant than welds or rivets, according to Cadillac’s Leone. “They will outlive all of us,” he says. “They don’t deteriorate.” More important, when the adhesives bond dissimilar metals, such as aluminum and steel, they prevent galvanic corrosion by insulating the two surfaces from each other.

Oftentimes, automakers use adhesives in concert with welding and riveting. This is done to make up for the relative weaknesses of the respective techniques. For instance, a part might be joined with a long strip of adhesive and then riveted on each end, much like the stitching and rivets on a pair of jeans.

Executives from car and chemical companies alike emphasize that adhesives are not used to save money. It’s much more about saving weight.

“Making cars lighter is not an option,” Leone says. “It’s a reality. The use of adhesive is more expensive than not using it. But all in all, on a dollar-per-kilogram basis, it is a very efficient use of our money to lightweight our vehicles.” 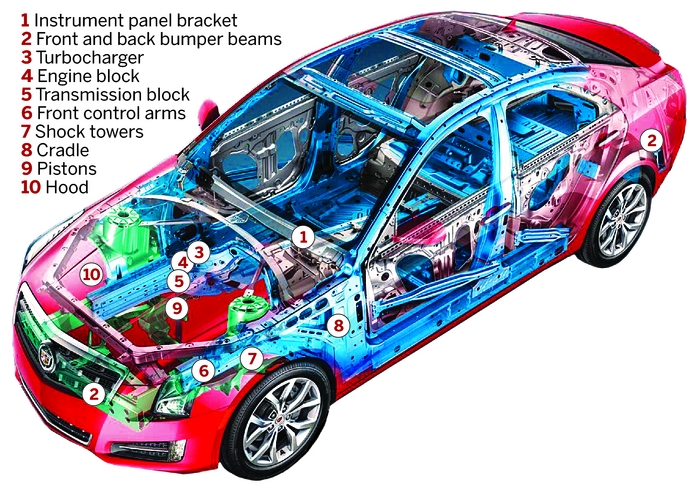 Credit: Cadillac/C&EN
Cadillac’s 2014 ATS, like the CTS, makes extensive use of aluminum throughout the car to save weight and reduce fuel consumption.

Materials
Goodyear Will Use PPG Silica
Materials
Dow Provides Glue That Bonds The F-150
Business
Making Fuel Cell Vehicles An [Almost] Affordable Reality
Share X
To send an e-mail to multiple recipients, separate e-mail addresses with a comma, semicolon, or both.
Title: Automakers Look To Adhesives And Aluminum For Gas Savings
Author: Alexander H. Tullo
Chemical & Engineering News will not share your email address with any other person or company.