Cleaning Up The Record 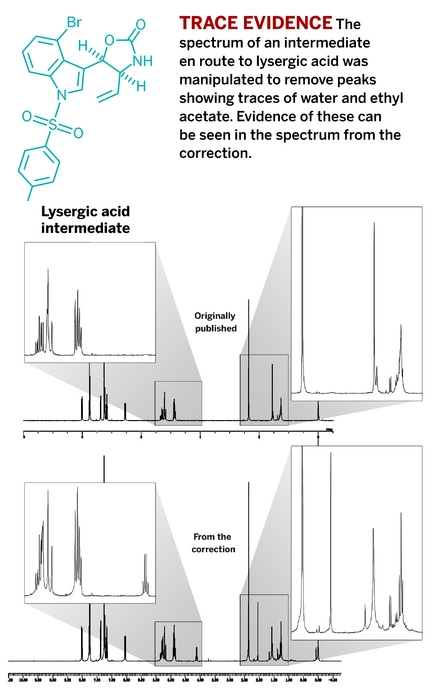 Last November, Tohru Fukuyama got the kind of e-mail that every principal investigator dreads. Amos B. Smith III, editor-in-chief of the journal Organic Letters, had written to say the journal had been tipped off about some “questionable sections” in nuclear magnetic resonance spectra published by Fukuyama’s lab.

Smith went on to explain that he’d had the journal’s data analyst look into the matter, and the analyst found irregularities in the spectra in question along with others from another Organic Letters paper from Fukuyama’s lab. Although Smith didn’t say it outright, the implication was clear: The spectra appeared to have been doctored to remove certain peaks—a no-no for scientific publications.

Correction to Total Synthesis of (−)-Huperzine A

Correction to Total Synthesis of Ecteinascidin 743

Correction to Total Synthesis of (−)-Mersicarpine

Correction to Synthetic Studies on (+)-Manzamine A: Stereoselective Synthesis of the Tetracyclic Core Framework

Correction to Concise Total Synthesis of (+)-Lyconadin A

Correction to Total Synthesis of (−)-Histrionicotoxin

Correction to Synthetic Studies on Chartelline C: Stereoselective Construction of the Core Skeleton

The problem seemed rampant in just these two papers, with Smith suggesting that no fewer than 28 spectra in their supporting information may have possibly been manipulated. But for Fukuyama, this was just the tip of the iceberg. In the weeks that followed, he would also hear from editors at the Journal of the American Chemical Society and Angewandte Chemie with similar concerns. As of C&EN press time, NMR spectra manipulations had prompted Fukuyama to publish corrections for 11 different publications. A few more, he says, are on the way.

As a principal investigator, Fukuyama is his laboratory’s visionary and leader—dreaming up new synthetic schemes and mentoring students in their careers as chemists. He is currently a professor at Nagoya University, in Japan, although he has also been on the faculty of Japan’s University of Tokyo and Rice University, in Texas. In the Japanese system, principal investigators sometimes have associate and assistant professors who help them run the lab. In the Fukuyama lab, this position is held by Satoshi Yokoshima. “Almost all of our recent research accomplishments are the results of close collaboration between myself, Professor Yokoshima, and our students,” Fukuyama explains.

Fukuyama tells C&EN that after hearing from Smith in November, he and Yokoshima scrutinized the supporting information of the papers Smith mentioned. They found that there were some unnaturally “noiseless” baselines in portions of the NMR spectra.

“We asked our students if they intentionally deleted some peaks,” Fukuyama says. “They all admitted that they used the ‘Delete Peak’ feature of the JEOL NMR spectrometer to remove, in most cases, minor solvent peaks.”

Yokoshima says they put priority on getting clean spectra to demonstrate sample purity. “We have told our students that the NMR spectra should not contain peaks of residual solvents or impurities for publication. Our comments and the limited machine time seem to have forced them to use the ‘Delete Peak’ function.”

This kind of spectra manipulation does not appear to be isolated to the Fukuyama lab. Masahisa Nakada, a chemistry professor at Japan’s Waseda University, recently published five similar corrections in Organic Letters. Nakada tells C&EN he checks every spectrum before sending them for publication, “but the manipulation was not obvious in the edited spectra.”

Like Fukuyama, Nakada reexamined the spectra after hearing from Smith and confronted his students. “I have told my students that the NMR spectra should not contain peaks of residual solvents or impurities for publication, but they used the ‘Delete Peak’ function probably because they felt a pressure to present spectra that are perfect within a limited time.” The corrections, Nakada notes, do not change the scientific conclusions of the papers.

The ability to remove peaks is a common function on several different types of NMR processing software, and it’s trivial to use, says Ivan Keresztes, director of Cornell University’s NMR facility. What’s more, he says, Photoshop and other software programs can also be used to smooth out spectra. “In this day and age, it’s easy to delete peaks that you don’t want to be there,” he says.

The chemistry community, Keresztes says, has a problem similar to that of the editors who create the covers of magazines such as Elle and Vogue. “We have an unrealistic expectation of what an NMR spectrum should look like,” he says. “There’s a pressure to present spectra that are perfect when, in fact, spectra are rarely ever perfect.”

“I did not even think that students would use the ‘Delete Peak’ function,” Yokoshima tells C&EN. Therefore, he says, it never occurred to him to tell them not to use it.

“It was our fault not to scrutinize every spectrum in the supporting information before sending them out for publication,” Fukuyama adds, “but my staff members and I simply believed that all of my students are honest.” As soon as they learned of the manipulations, he says, “we told our students never to do such a stupid thing. I can assure you that we will never send out manuscripts containing manipulated spectra again.”

Yokoshima says he and Fukuyama heard from many colleagues after the series of corrections came out in Organic Letters. “Some professors told us that we should not trust students,” he says. “But having good relationships with coworkers and students is important to advance projects, and we want to trust them. From these NMR problems, we learned that it is rather risky to give 100% unconditional credibility to every student.”

“While the corrections somewhat lower the yields of the reactions involved, they do not change the conclusions in the papers,” Fukuyama notes. Still, both Fukuyama and Yokoshima worry that this incident will tarnish their reputations as scientists. “We cannot do much about what happened in the past,” Fukuyama says. “All we have to do is to make our best effort to achieve good science and regain trust from the members of the chemical community.”

Comments
Michael Pirrung (May 2, 2014 10:59 PM)
There was a key piece of information absent in this article. It has been policy for many years at all ACS organic chemistry journals that evidence of the purity of characterized compounds must be provided. The means suggested are either a 'clean' NMR spectrum or a HPLC trace. This is necessary following the demise of elemental analysis to establish both elemental composition and purity. Your article implies the transgressions were fairly minor, but in fact, without manipulation of their data, these authors would have been unable to meet an editorial requirement for publication. These are serious breaches of integrity, and publishing corrections is only a mild punishment.
Reply »

Anonymous (June 3, 2014 4:18 PM)
I agree with Michael Pirrung. Merely correcting the offending data is inadequate. Out of curiosity I looked up the corrections in the lysergic acid case, specifically compound 22 referenced in this article. If the "original" FID is now in the correction why is the ratio of water(1.6ppm):Tosyl-CH3(2.4ppm) group different in the two published spectra? In the original-retracted data it is roughly 1:2 ratio and in the corrected "original" FID it is closer to 1:4. Was the spectra reacquired with the same material or was this truly the "original" FID that was doctored? I do not understand how removal of other solvent peaks like ethyl acetate should affect this ratio.
Reply »