CANCER KILLER
[+]Enlarge
Credit: J. Am. Chem. Soc.
A drug-delivering nanoparticle with cisplatin core (green) is formed by polymerization of doxorubicin- and camptothecin-derivatized monomers and a cisplatin cross-linker. 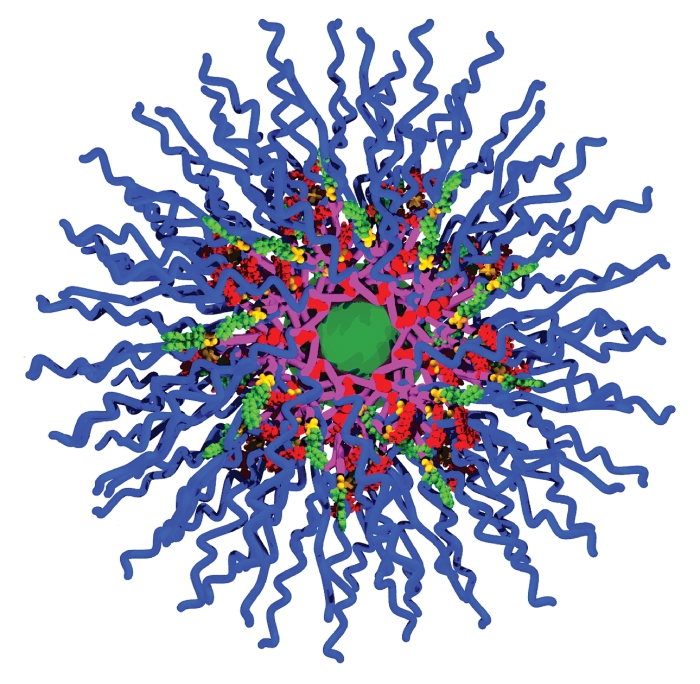 Credit: J. Am. Chem. Soc.
A drug-delivering nanoparticle with cisplatin core (green) is formed by polymerization of doxorubicin- and camptothecin-derivatized monomers and a cisplatin cross-linker.

The first polymer nanoparticles that carry a defined ratio of three cancer drugs and release them with three independent triggering mechanisms have been developed. The approach could provide a new way of delivering specific amounts of multiple drugs to patients and could help researchers optimize doses of such combination therapies. The drug delivery nanoparticles were developed by Jeremiah A. Johnson of MIT and coworkers (J. Am. Chem. Soc. 2014, DOI: 10.1021/ja502011g).

Patients with cancer and other conditions often benefit from taking cocktails of two or more drugs. Administering them in one package, instead of one at a time, can improve controlled dosing of disease cells by making it unnecessary for each agent to find its own way to the cocktail party. And nanoparticle packaging can make it easier to direct drugs selectively to disease sites, minimizing side effects that may occur when they hit extraneous targets.

Nanoparticle systems for combination therapies have been developed before. For example, attaching one drug noncovalently and another covalently to nanoparticles has made it possible to use separate release mechanisms to deliver the two agents independently. However, no previous nanoparticles have been able to “carry and release a precise ratio of more than two drugs,” Johnson says.

Instead of attaching drugs to nanoparticles, Johnson’s team synthesized nanoparticles from drug-containing building blocks. In two building blocks, the researchers linked doxorubicin or camptothecin to a norbornene monomer (along with a protective polyethylene glycol group). In a third unit, they inserted cisplatin between two norbornene monomers to form a cross-linking agent. The researchers then used a technique they developed earlier, called brush-first ring-opening metathesis polymerization (ROMP), to combine the monomers and cross-linkers in specific amounts. Doxorubicin, camptothecin, and cisplatin are a standard combination therapy for aggressive ovarian cancers.

In tests on ovarian cancer cells, an independent trigger released each drug from the nanoparticles—reactions induced by ultraviolet light and an endogenous enzyme released doxorubicin and camptothecin, respectively, and a redox reaction induced by endogenous glutathione set cisplatin free.

The three-drug nanoparticles, with ratios matched to maximum tolerated doses of each of the drugs, were better than corresponding one- and two-drug-loaded nanoparticles at killing cultured ovarian cancer cells. “Mouse studies are ongoing,” Johnson says, adding that he and his coworkers are also testing four-drug combinations and coadministering nanoparticles and therapeutic small-interfering RNAs.

The study “represents a clever breakthrough in multidrug release through the simultaneous inclusion of different drugs, through distinct chemistries, within the same polymer platform,” comments Todd Emrick, a polymer therapeutics expert at the University of Massachusetts, Amherst. “ROMP is a smart choice of polymerization chemistry since it proceeds cleanly in the presence of the drugs.”

Comments
Shamsuzzaman Ansari (September 9, 2014 5:29 AM)
What is the market size (in U.S. million $) for nanoparticles as drug delivery systems in cancer therapy?
Reply »