Most chemical reactions perform best when shaken or stirred. Active mixing maximizes the chances that reactant molecules will find one another. But chemists who are exploiting small-volume reactions on paper, which is a low-cost platform for synthesis and screening, rarely achieve such thorough mixing.

A team in Canada now suggests a solution for that issue: printing Teflon barriers onto paper (Angew. Chem. Int. Ed. 2014, DOI: 10.1002/anie.201402037). The barriers direct where excess solvent seeps through, promoting mixing. The researchers, led by Ratmir Derda of the University of Alberta, used the technique to build 96 small peptides side by side on a sheet of paper about the size of an index card.

Printing barriers on paper isn’t a new idea, and researchers have used specially treated liquid-repelling paper before. But combining the barrier and liquid-repulsion concepts provides an improvement over established techniques, says Marya Lieberman, who builds paper analytical devices at the University of Notre Dame. Solvents dissolve the wax barriers often used, and other methods require specialized facilities. Derda’s Teflon technique, in contrast, uses a printer and simple solution processing to form solvent-resistant barriers that make the paper compatible with a wider range of chemistry, she says.

Though the peptide yields are not significantly better than those of established solid-phase peptide synthesis techniques, the work is a step forward in streamlining such syntheses, says Helen E. Blackwell, an expert in paper arrays at the University of Wisconsin, Madison. Derda’s paper supports can be stacked as reagents are loaded and excesses are washed away. This “very clever strategy” may eventually facilitate interesting combinatorial chemistry, Blackwell says.

Derda has filed a provisional patent on the technology. 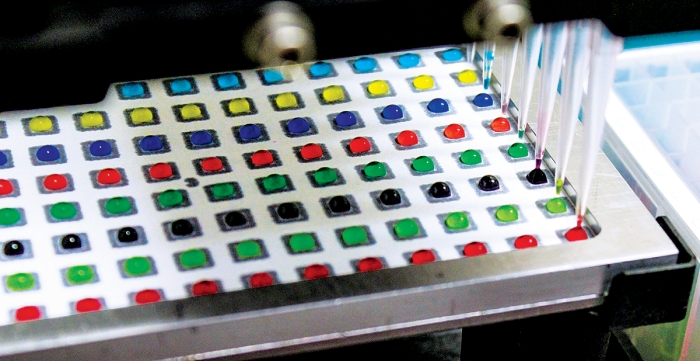 Electronic Materials
Chemistry in Pictures: Blooming brilliant
Ionic Liquids
Chemistry in Pictures: Papa’s got a brand new solvent
Materials
Fluorescent materials are the brightest ever made
Share X
To send an e-mail to multiple recipients, separate e-mail addresses with a comma, semicolon, or both.
Title: Teflon-Patterned Paper
Author: Carmen Drahl
Chemical & Engineering News will not share your email address with any other person or company.