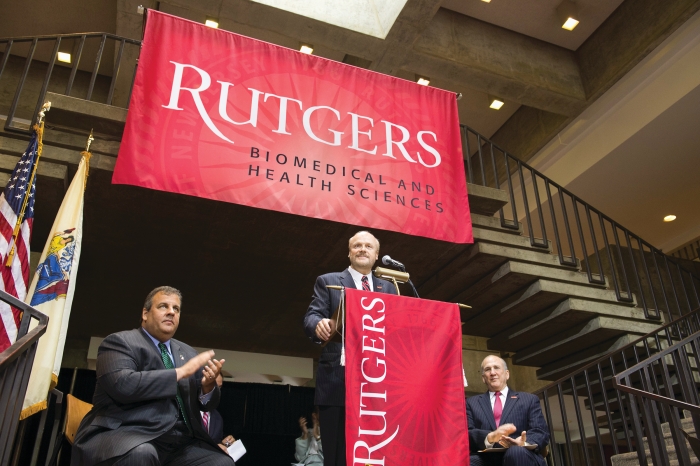 On Aug. 22, 2012, New Jersey Gov. Chris Christie undertook a three-city victory lap to the campuses of Rutgers, the state’s largest university. On his second stop, the main campus in New Brunswick, the governor signed into law a bill merging Rutgers with the University of Medicine & Dentistry of New Jersey.

The merger went into effect in July 2013, at which point Rutgers, with its well-established research assets in chemistry, biology, and pharmacology, gained access to patients in its own medical clinics. Emphasizing this point, the medical school and pharmaceutical-related research at Rutgers were combined to create Rutgers Biomedical & Health Sciences (RBHS), which is described in a new university strategic plan as an entity on par with the three campuses.

A guide to resources for potential industry partners

RBHS is also a central resource of the university’s Office of Research & Economic Development. Less than a year old, the office aims to expand Rutgers’s collaboration with industry in research areas including pharmaceuticals, energy storage, data management, and agriculture across the multilocation university.

The governor could boast that he succeeded in an effort that eluded his two predecessors, James E. McGreevy and Jon S. Corzine. But in the intervening years New Jersey, despite being home to many major pharmaceutical companies, lost thousands of jobs in drug research as talent bled steadily to pharma hubs in and around the academic centers of Boston, San Diego, and San Francisco.

The New Rutgers, as the school is described in the title of the strategic plan, is now playing catch-up with these well-established academic medical centers. If Rutgers wants to succeed at making itself an engine of rejuvenation for the drug industry in the state, it will need to bring cohesion to what is now a sprawling set of academic assets.

Much of the burden of making this happen falls on Christopher J. Molloy, head of the Office of Research & Economic Development. Molloy oversaw the integration of the medical schools over the past year and put in place scientists with drug company experience to manage industry outreach. A biochemist and research pharmacologist who conducted oncology and cardiology drug discovery at Bristol-Myers Squibb and Johnson & Johnson, Molloy notes that Rutgers’s new president, Robert L. Barchi, is a neuroscientist and the first scientist to head the 248-year-old university.

“We are a little late to the game in making this happen,” Molloy acknowledges about Rutgers’s effort to build a coordinated drug discovery resource for industry. Vanderbilt University’s Center for Neuroscience Drug Discovery and the Moulder Center for Drug Discovery Research at Temple University come to mind as examples of programs with several years of experience under their belts, he says.

Rutgers, however, has a solid background in science research and a history of one-off industrial partnerships. And Molloy has been successful in drawing from New Jersey’s talent pool to place scientists with industry backgrounds in key industry outreach positions.

One of them is S. David Kimball, a medicinal chemist with research experience at Bristol-Myers Squibb and Pharmacopeia who heads the Rutgers Office of Translational Science. The office is staffed by former industry researchers working full-time at the university, although not as tenured professors. The office, which houses a molecular imaging center equipped with magnetic resonance, positron emission tomography, and optical X-ray equipment, functions as liaison between academic researchers and potential industrial partners.

Kimball describes Rutgers’s plan as distinct from the therapeutic focus taken at Vanderbilt and the contract research tack being pursued at Moulder. Rutgers intends to incorporate both approaches in marshaling the school’s wide range of biomedical capabilities.

For example, Kimball notes that the university has strong therapeutic focuses in oncology with the Cancer Institute of New Jersey and in anti-infectives with the Public Health Research Institute, both of which became part of Rutgers following the merger. The goal is long-term partnership. “The greatest value we can provide is to bring our experience and insight to bear as collaborative partners in discovery and innovation,” he says.

The hook for Kimball’s group is medicinal chemistry. “By designing molecular probes to understand biological and disease pathways, we can generate competitive preliminary data for grants as well as discover novel molecules that may be patentable,” he says. “Both of these are useful and important to our industry partners.”

Rutgers is also making its proteomics and protein drug research part of the new business outreach effort. Host to the U.S. data center of the Worldwide Protein Data Bank since the late 1990s, the university formed the Center for Integrative Proteomic Research two years ago. Its director, Stephen K. Burley, says his decision to come to Rutgers in early 2013 was heavily influenced by the acquisition of the medical schools.

“I came out of a failed retirement,” says Burley, a physicist and structural biologist who taught at Rockefeller University before working as chief scientific officer at SGX Pharmaceuticals in San Diego, which was acquired by Eli Lilly & Co. in 2008. Working with the protein data bank at Rutgers was also enticement to take the position, he says, one that became even more interesting when the Cambridge Crystallographic Data Centre, a British small-molecule counterpart to the protein data bank, set up its U.S. office at Rutgers last year.

The proteomics center will work closely with the Office of Translational Science as part of the push for industry partnerships, according to Burley. “I consider proteomics to be entrepreneurial,” he says. “My job is to sell R&D and hire people who can package and market R&D to various funders, federal and private, and pay rent to the university and run the place like a business.” 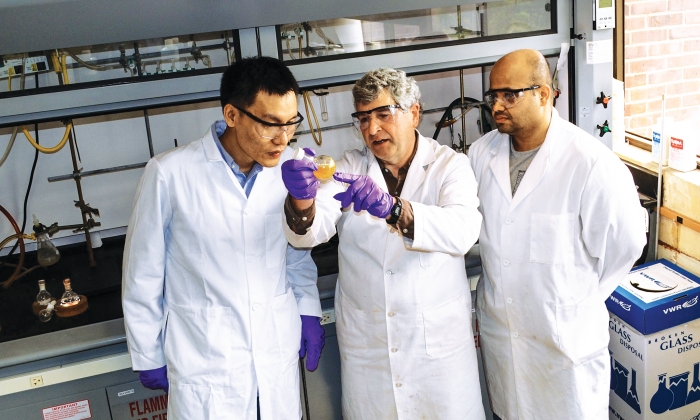 As for industrial partnerships, Burley envisions a sweet spot for his group and Kimball’s, pointing to evidence that one-third of drug failures result from lack of efficacy once a therapeutic compound reaches its target.

“What this tells you is that the individual who chose the target does not understand the target adequately,” he says. “Rutgers covers a very broad range of biology with deep expertise in particular molecules and particular targets for drug discovery. I see a great opportunity for Rutgers in engaging the pharma and biotech industries on particular targets and target classes.”

David M. Floyd, the former head of chemistry at Bristol-Myers Squibb, who now directs research done at Rutgers for the Medicines for Malaria Venture, agrees that there is huge demand for this kind of early-stage support.

“Over the years, I and others involved in neglected diseases have noticed that academia has a very rich source of primary, exploratory biology,” Floyd says, “but that academic biologists have accessed screen hits that are not useful to study in pharmacology.” Teaming biology with medicinal chemistry, he adds, will give Rutgers researchers a better chance at finding successful starting points for drug development.

Richard Mammone, Rutgers’s associate vice president of innovation and partnerships, emphasizes that delivering these services will require a fundamental change in culture for scientists at Rutgers who, until now, have pursued partnerships independently or not at all. Mammone says his office will facilitate a more businesslike approach to cultivating industrial partnerships.

Mammone concedes that the need to evolve academic science culture toward entrepreneurial research has been under discussion at universities for decades. But he notes that Rutgers has been part of the shift for some time with smaller-scale industrial outreach ventures.

Ex-pharma executives such as Molloy also see demand in New Jersey for the services they can offer. “The job of the business unit I manage and the new university as a whole is to show that by adding talent from industry, academia can be an engine to fill in the innovation gap—the reduction in basic science going on in big pharma,” he says. He notes that he, Burley, Kimball, and Mammone all have academic and industry backgrounds as well as experience with start-up companies.

Alfred P. Tonelli, senior director of external innovation in global public health at Johnson & Johnson’s Janssen R&D arm, is in discussion with Rutgers regarding research in neglected diseases. J&J has external innovation centers in Boston; Menlo Park, Calif.; and London and, as a New Jersey-based firm, is interested in starting work in the state with Rutgers. “What attracts us is that there are real experienced people in place, both in academic research and in drug development,” he says. “And New Jersey is very important. There are top people there.”

Rutgers’s Kimball attests to the research community’s dedication to the Garden State, despite the dislocation of recent years. “I commuted to Cambridge,” he says, noting that he worked there as chief scientific officer for Hydra Biosciences after Pharmacopeia fell on hard times. “But as soon I had the opportunity to lock in and come back to New Jersey, I did. There really is an opportunity to build something here with the talent that we have.”

Drug Discovery
A small molecule in the gut could explain bariatric surgery’s anti-diabetic effects
Vaccines
What will it take to make an effective vaccine for COVID-19?
Pharmaceuticals
Drug ingredients considered inert might have biological activity
Share X
To send an e-mail to multiple recipients, separate e-mail addresses with a comma, semicolon, or both.
Title: New Rutgers Focuses On Academic, Industrial Collaborations
Author: Rick Mullin
Chemical & Engineering News will not share your email address with any other person or company.