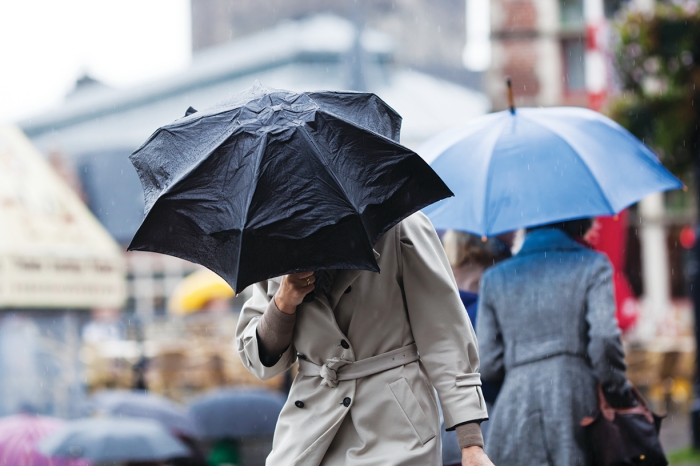 Credit: Shutterstock
Climate change is expected to bring more intense rainfall because of a warming atmosphere.

Measurable changes in the U.S. climate are already occurring because of anthropogenic greenhouse gas emissions, and all regions of the country are being affected, according to a report released last week by a committee of leading U.S. scientists at a White House briefing. The U.S. National Climate Assessment states that climate-related changes will accelerate through the century.

Prior editions of this assessment were published in 2000 and 2009, but the difference between those reports and the latest one is that the observed impacts are clearer and more extreme, says Jerry M. Melillo, distinguished scientist at the Marine Biological Laboratory in Woods Hole, Mass., and chair of the advisory committee that prepared the assessment. The new report also “digs deeper” into climate-change effects in the U.S., he notes, particularly looking at regional impacts as well as overall cumulative changes.

“For decades we have been collecting the dots about climate change,” Melillo says. “Now we have connected those dots.”

Sea-level rise, with its impact on coastal cities such as Miami; Norfolk, Va.; and Portsmouth, N.H., is one of three areas of greatest climate concern singled out by Melillo and Karl. The other two are persistent drought in the southwestern U.S., with the increasing likelihood of prolonged fire seasons, and extreme and intense precipitation events, which show a 70% increase in recent years in the northeastern U.S.

The report’s findings underscore the need to take action to cut greenhouse gas emissions and reduce the environmental threats of climate change, the two scientists stress. The report lends support to President Barack Obama’s announcement last June that he intends to take action through executive orders and regulations to reduce greenhouse gas emissions as well as mitigate the worst impacts of a changing climate.

The path ahead, however, will be difficult. After publication of the climate assessment, a flood of criticism came from fossil-fuel industries and their allies in Congress.

One of them is Lamar S. Smith (R-Texas), chairman of the House of Representatives Committee on Science, Space & Technology. Smith calls the report a “political document intended to frighten Americans” with “little science to support any connection between climate change and more frequent or extreme storms.” The President, Smith adds, is stretching the truth to “drum up support for more costly and unnecessary regulations and subsidies.”

Comments
R. Knight (May 11, 2014 8:43 PM)
It must be galling to have to dutifully report as objective news the obviously self-serving criticism of this report by the GOP chair of the Science Committee. His statement is a slap in the face of our colleagues who contributed to the report, and in fact a slap in the face of all scientists. The claim that there is "little science" to support conclusions in the report and call it a "political document" is quite ironic given the bald-faced politicization of this issue by energy-state politicians. I sincerely doubt that Smith or any of his staff even bothered to read the report, and in fact his statement was probabaly drafted days before the report was released. Shameful.
Reply »

Ken Lundgreen (May 12, 2014 8:03 AM)
We have to fight for reforms that careful objective study have now been made clear to us. It shouldn't be that way but we have to accept that it is & pitch our battle tents on the enemies lawn. Now, that's getting political, you betcha !!!
Reply »

rb (May 12, 2014 9:27 AM)
I agree completely with R Knight. It is irresponsible of the editorial board of C&EN to cave into political pressure and print an obvious attempt at dis-information as though it had scientific merit.
Reply »

Carl Nelson (May 14, 2014 2:27 PM)
Climate change can be disputed by even the best of scientists but I believe we must accept the unequivocal fact that burning fossil fuels is destructive and deleterious to our planet.
Reply »

M Guisbert (May 14, 2014 2:59 PM)
Your report at least presents two sides. You could have increased your impartiality with reporting on the level of funding this 'white house' panel receives for climate change research. The federal government and its experts should be given at least the same level of scrutiny the fossil-fuel industries regularly receive, as they fund themselves through their own 'results'. Are there significant differences between this report and the one issued by America and England earlier this year? If this is settled science why are there differences? Because the sun is the largest source of greenhouse energy to this planet, wouldn't all this money be better spent devising a partial solar UV light shield?
Reply »

G. Wells (May 15, 2014 9:43 AM)
Good science is never "settled". Hypotheses and theories are always being reevaluated and refined. Complex and multivariate systems, like climate, are bound to produce uncertain conclusions and predictions as data pours in. Eventually at some point, the probability of concluding that "A" is more likely than "B" becomes overwhelming and establishes the new paradigm.

Unfortunately, the hyper-polarization of our money-saturated politics ensures that even after Miami and Manhattan are submerged by the rising tides of human-influenced climate change, we can be assured that politicians on the extreme right will attribute it to God's wrath against homosexuals and Obamacare.
Reply »

Mike Lucente (May 15, 2014 12:14 PM)
I am a geologist and also help collect and restore 13,000 and 40,000 year old mammoth, giant Bison and camel bones. They are found near Corpus Christi, Texas. Why a 27,000 year "hiatus" between these bone deposits? Both periods coincide when the last 2 huge glaciers covered most of the North American continent and "pushed" the "Mega fauna" down here. We also documented that sea level was over 350' lower than present during these times AND completely receded back to present conditions with concurrent rises in sea level. Sea level has been continually rising for 13,000 yrs and did so 40,000 years ago (correlation does not equal causation for CO2, sorry)
Reply »

M Zeigler (May 19, 2014 12:16 PM)
Having an anti-science crusader like Lamar Smith as the chairman of the House of Representatives Committee on Science, Space & Technology is like putting the fox in charge of the hen-house. It's dysfunctional, uses the same denialist tactics that have been used for decades, and he does his job in bad faith.

What worries me more though is how little attention is paid to the much more straightforward link between CO2 emissions and ocean acidification. This might be an even larger problem than global warming!
Reply »

Jeff Johnson (May 21, 2014 10:47 AM)
My hope in this story was to present the views of those with authority to determine how the U.S. responds to climate change--the President and the head of a key congressional science committee. There were a large number of Republicans stumbling over one another to criticize the report. Rep. Smith as chair of the House Science Committee is a powerful actor and that is why he is in this story. I think on science publications, like C&EN, reporters constantly wrestle with how to present political statements that may be scientifically inaccurate but remain important in shaping national policy. This is a news story and at some point, we have to just lay it out and leave it to the reader. I appreciate the comments.
Reply »

R. Lee Shearer (May 21, 2014 1:46 PM)
Let's debate the science and not politicize the issue or use deceptive language or arguments as a means to fallacious outcomes.

There is no basis for this claim, other than modeling. The evidence shows no acceleration in sea level rise over the past 150 years or so, and particularly none in the past few decades when CO2 emissions have accelerated. In fact, sea level has risen greatly since the beginning of the current interglacial. This rise preceded man-made emissions of CO2. Karl would have people believe that it is something new resulting from AGW.
Reply »

KM (May 23, 2014 7:18 AM)
Regarding the comments here that there is no evidence for sea level rise, I found the following and many others in less than 60 seconds of searching. If you can cite papers or research refuting these then please do so.

"We present new sea-level reconstructions for the past 2100 y based on salt-marsh sedimentary sequences from the US Atlantic coast. The data from North Carolina reveal four phases of persistent sea-level change after correction for glacial isostatic adjustment. Sea level was stable from at least BC 100 until AD 950. Sea level then increased for 400 y at a rate of 0.6 mm/y, followed by a further period of stable, or slightly falling, sea level that persisted until the late 19th century. Since then, sea level has risen at an average rate of 2.1 mm/y, representing the steepest century-scale increase of the past two millennia. This rate was initiated between AD 1865 and 1892. Using an extended semiempirical modeling approach, we show that these sea-level changes are consistent with global temperature for at least the past millennium." Kemp, A. A., et al., PNAS, 2011, 108, 11017


From the NOAA: http://oceanservice.noaa.gov/facts/sealevel.html
Reply »