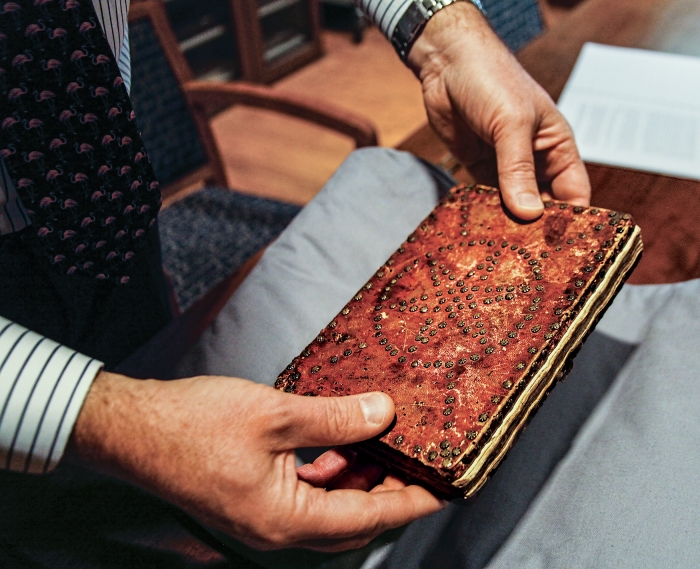 Credit: Sarah Everts/C&EN
This 15th-century “Book of Secrets” contains a cornucopia of alchemy recipes for pest control, pigment manufacture, and, of course, transmutation.

In the dim illumination of a library devoted to protecting ancient books from light degradation, James R. Voelkel gingerly picks up a nearly 600-year-old alchemy text. Written by hand sometime around 1438, the thick tome is bound by a leather and wooden cover that is studded with metal nails in the shape of a hexagonal star lying within a circular disk. Inside, worms have eaten through small sections of the text, which features more than 500 alchemical recipes.

The recipes provide instructions for a broad range of goals, from subliming mercury and sulfur into gold to producing concoctions for killing scorpions, doves, and house fleas. There are also sleeping potions, brews to encourage vomiting or to make a woman appear to be virginal, and methods for beautifying hair, improving poor hearing, and “providing relief when one has quickly and easily become inebriated.”

The text is commonly referred to as a “Book of Secrets,” but “we’ve been calling it the Harry Potter book,” because its appearance satisfies all sorts of pop culture fantasies of alchemy, says Voelkel, the rare book curator at the Chemical Heritage Foundation (CHF), in Philadelphia, a center for history of chemistry scholarship. The ancient manuscript is one of nine extremely rare medieval alchemy texts and three illuminated alchemical illustrations recently acquired by CHF after a rare book library in the Netherlands hit financial straits.

Nine books may not seem like a major score, but “when I saw the manuscripts, I was totally blown away,” says Lawrence M. Principe, a historian of alchemy at Johns Hopkins University who assessed the cache for the antique book dealer who put it up for sale. “This is certainly the most important chunk of significant alchemical manuscripts of this period to show up on the market in many decades,” he adds.

Credit: Les Enluminures/CHF
This intentionally obscure sequence of three panels provides allegorical instructions for transmuting mercury and sulfur into gold in order to keep the recipe secret. Birds depict sublimation, the colors red and black indicate different stages in making the philosophers’ stone, and images of dragons biting their tails often refer to the cycle of transformations of matter.

Most of the nine texts predate the year 1500. They are all handwritten on paper or parchment, created prior to the development of the printing press, a technological innovation that helped launch alchemy’s golden age in the 17th century, when heavy-hitters like Isaac Newton and Robert Boyle avidly pursued transmutation of base metals into gold with as much enthusiasm as their more famous chemistry innovations. “You see alchemical manuscripts on the market every once in a while, but usually they are 17th century and they’re copies of published texts or they are commonplace books,” Principe says. The newly acquired texts are from important alchemists, including Arnald of Villanova and Petrus Bonus, authors who inspired Newton and Boyle, he says. Although many libraries around the world contain alchemical manuscripts, only a few institutions in North America—such as Yale University—have more than a couple of texts predating 1500.

LAB TECHNIQUE
[+]Enlarge
Credit: Sarah Everts/C&EN
Literal representations for experimental set-ups were not as common as allegorical ones in certain alchemy texts. 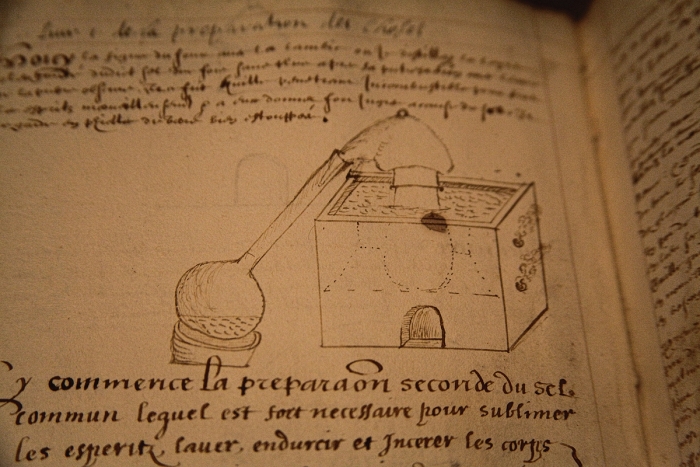 Credit: Sarah Everts/C&EN
Literal representations for experimental set-ups were not as common as allegorical ones in certain alchemy texts.

Historians will benefit from the fact that many of the newly acquired texts show evidence of use, Principe says. “For example, the one from Petrus Bonus has lots of marginalia, which is really valuable for historians.” These added notes in the margins compare the text with other manuscripts, or they include additional instructions or lab tips, Principe explains.

“Annotations can tell you things that the book could never tell you alone—such as which recipes were used, what worked or didn’t,” adds Elisabeth Berry Drago, a CHF scholar working on ancient pigment recipes. “They help form a picture of the people who were actually using the texts.” For example, one manuscript from 1450 is soiled with brown stains and black soot—an indication that the text was heavily used by its alchemist owners.

For example, in one common alchemical image, a two-headed hermaphrodite, represents sulfur and mercury, which come together to make the philosophers’ stone—which refers to gold or an elixir of life, depending on the alchemist and the era. Birds often depict sublimation, the colors red and black typically indicate different stages in making the philosophers’ stone, and images of dragons biting their tails often refer to “the cycle of transformations of matter from one substance to the next,” Principe says.

MYSTICAL SYMBOLISM
[+]Enlarge
Credit: Les Enluminures/CHF
This intentionally obscure image of a dragon biting its own tail is an allegory to matter transformation cycles inherent in alchemy. 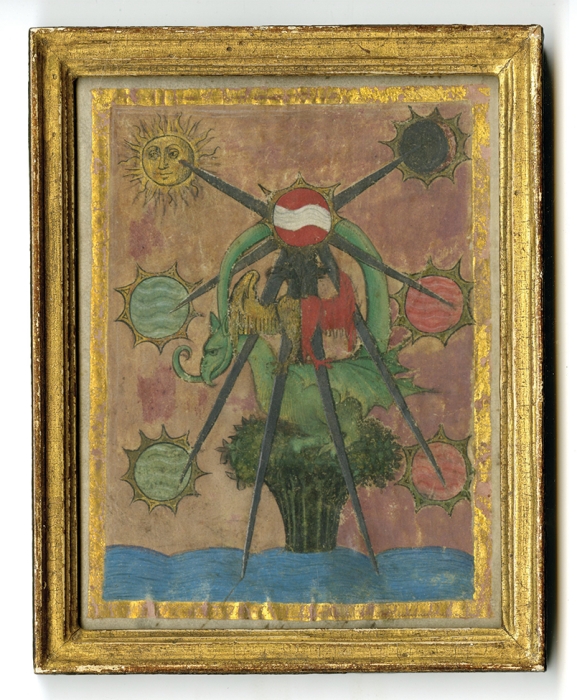 Credit: Les Enluminures/CHF
This intentionally obscure image of a dragon biting its own tail is an allegory to matter transformation cycles inherent in alchemy.

But Bilak is particularly excited by some more literal illustrations found in one of the newly acquired texts, which is sprinkled with technical diagrams of centuries-old experimental set-ups that rely on more contemporary flasks, anvils, and ovens instead of intentionally obscure allegories. “The scribe was a very adept draftsman,” Bilak says. “It’s like a snapshot of what was going on at the moment.”

But the crowning text, “the one we really wanted, was the manuscript by Petrus Bonus called ‘The Precious New Pearl,’ ” Voelkel says. CHF already had the first printed version of this text, which is one of alchemy’s most famous and well referenced. But the newly acquired one predates the printed version and is handwritten—and it is one of only six known complete manuscripts, Voelkel explains.

When printers began publishing alchemy texts, they “were printed as commodities, and the printers didn’t take as much care with them as they would with Aristotle or Plato or other great thinkers,” Voelkel explains. “With the alchemical manuscripts, the printers wanted to get them out on the market as fast as possible so they sometimes left parts out.” Having a pre-printing-press version of this important text in the CHF library will give alchemy historians the opportunity to assemble what’s called a critical edition of the text, says Joel A. Klein, an alchemy scholar at CHF.

“A critical edition is one where you take all of the extant manuscripts, compare them with one another, find variations in the texts, and try and come to the ultimate edition with lots of scholarly notes and notes about why we should be skeptical about certain sections,” he explains.

With the opportunity to critically analyze important alchemical texts, to compare allegorical images with literal depictions of alchemical experimentation, or to examine (or even re-create) medieval recipes for transmutation and pest control, “we are hoping the new acquisition will be attractive to many researchers, from alchemy scholars to art historians,” Voelkel says.

Synthesis
Berlin exhibit features alchemical oddities from around the globe
Analytical Chemistry
Lost color revealed on Ancient Greek marble
Education
Old chemistry books and the chemistry of old books
Share X
To send an e-mail to multiple recipients, separate e-mail addresses with a comma, semicolon, or both.
Title: Scholars Land Alchemy Cache
Author: Sarah Everts
Chemical & Engineering News will not share your email address with any other person or company.

Comments
David Morrissey (January 14, 2014 7:42 AM)
Hello -- the posted link for the "secret recipe" only leads back to the same webpage as the article -- is there a secret password or handshake necessary? --
Reply »

Martin Zidar (January 18, 2014 5:09 PM)
Hello -I have noticed the same problem - the posted link for the "secret recipe" only leads back to the same webpage as the article -- Could you send additional clarification how to follow the link to secret recipe? --
Reply »

Harvey Aalter (January 29, 2014 2:56 PM)
Same comment. The web address bottom of p. 30 leads only to the web version of the article. Also, why does the archivist in the photo handle the rare manuscript with ungloved hands?
Reply »