3-D Models, Without The Kit 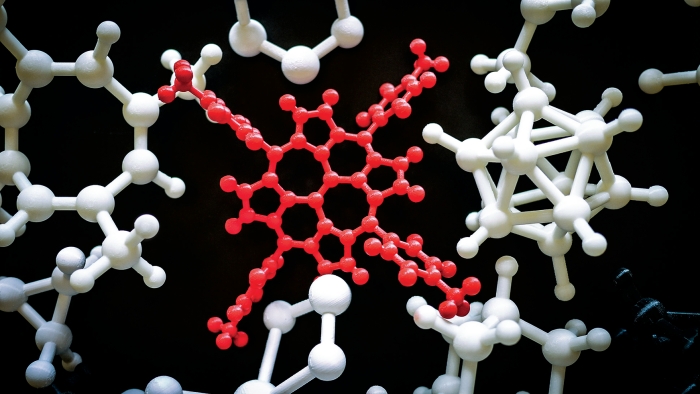 When Amar Flood packed his bags for the 2009 International Symposium on Macrocyclic & Supramolecular Chemistry, in Maastricht, the Netherlands, he had to find space for some unconventional presentation props. At the time, Flood was an assistant professor at Indiana University. He had hoped to impress his colleagues at the symposium with a talk, but the meeting’s organizers had instead assigned his two submitted abstracts to poster presentations.

Still, with his tenure clock counting down, Flood knew that he had to somehow make a splash. That’s when he struck upon the idea of using his university’s three-dimensional printer to make molecular models of one of his recently published molecules—a symmetrical macrocycle coordinating a bromide ion. The multicolored models were small enough to hold in one’s hand and cost less than $3.00 each to make.

“I simply handed them out to everybody that I knew and everybody I met to share our molecules with them in a more permanent way. It was kind of like a calling card,” Flood recalls. “It’s just fantastic to be able to hold your molecules in your hand and admire them and share them with other people, as opposed to looking at them on a computer screen. It becomes an irresistible object. To this day, people still tell me that they dig that molecule out of their drawers.”

In the intervening years, 3-D printing has gone from a prototyping curiosity to a full-blown manufacturing tool. Jewelry, eyeglass frames, firearm components, and even entire houses have been built using 3-D printing technology. As the cost of the printers comes down and more universities make them accessible to researchers, chemists have taken note. Now, three groups working independently of one another have published easy-to-follow instructions for 3-D printing molecular models and models of crystal structures.

“The idea here was to really address the fact that you would see a lot of these instructions for 3-D printing this and that online, including some primitive examples of crystal-structure models, but they were all pretty difficult to follow,” says Ognjen Š. Miljanić, a chemistry professor at the University of Houston.

Miljanić’s group teamed up with Flood’s and recently published a 3-D printing protocol (CrystEngComm 2014, DOI: 10.1039/c4ce00371c). “We figured out this method that was very easy to do, and we wanted to get it into the peer-reviewed literature so that people can use it,” Miljanić explains.

Credit: Ognjen Miljanić
These colorful models of crystal structures (left and right) and a metal-organic framework (center) were printed out of sandstone.

It appears it was an idea whose time had finally come. Unbeknownst to Miljanić and Flood, Vincent F. Scalfani and Thomas P. Vaid of the University of Alabama had also developed an instruction guide for 3-D printing molecular models (J. Chem. Educ. 2014, DOI: 10.1021/ed400887t), as had a group led by Leroy Cronin, a chemistry professor at Scotland’s University of Glasgow (Cryst. Growth Des. 2014, DOI: 10.1021/cg5003012). All three papers were published online last month.

“Our procedures are largely identical,” Miljanić notes. “People either don’t know that 3-D printing is readily available or are intimidated to use it, so that’s why we wanted to make our procedure painfully obvious to follow. In this way we can introduce people who have no experience with 3-D design to this methodology.”

All one needs is a computer and a couple of free pieces of software that convert crystal-structure files or Chem3D files into a file that a 3-D printer can read. You don’t even need to have a 3-D printer, Miljanić points out. There are companies, such as Shapeways, that will print out your molecular model and mail it to you.

Miljanić used Shapeways to print out multicolored models of crystal structures and metal-organic frameworks. To get that multicolored look at a reasonable price, he had the company print the structures in sandstone, which has a porous surface that will soak up water. To solve that problem, Flood just used some polyacrylic spray from the hardware store to render the models relatively impermeable.

“Most of chemistry is dependent on structural information in three dimensions, but probably no field more than crystallography,” Miljanić says. “I predict that in a few years crystal-structure processing software will have a feature that lets you 3-D print, just like we have now for printing in two dimensions.”

“I hope that people start to use 3-D printing to introduce different examples of molecules in teaching,” says Scalfani, a science and engineering librarian. “There is this classic set of molecules that everyone seems to use. Now, with our method, you can create your own custom examples to teach with.”

“You’re not limited to molecules that actually exist,” adds Vaid, a chemistry professor. “You can make up anything you want. I taught a graduate inorganic class, and we used these extensively as I was teaching point groups. It helps quite a bit to be able to see 3-D models that students can look at, turn around, and explore from different angles.”

Of course, students have been able to do these kinds of 3-D manipulations for decades with molecular-modeling kits that let you construct molecules atom by atom. Even so, Vaid says, “there are things that you can’t build easily with a lot of the model kits that are available—things with a lot of atoms, for example.” Chemists are likely also familiar with permanent solid-state structure models made from metal and plastic, but these can easily cost hundreds of dollars. With 3-D printing, you can make the same permanent models for $10 to $75, depending on the size and complexity of the model, Scalfani says.

The University of Glasgow’s Cronin says he hopes chemists will use the 3-D printed molecules as a collaboration tool. He started having his students print molecules they’d made because he was having a tough time visualizing them on the computer screen. “If I have the students 3-D print each molecule they’ve made and bring me them like a collection of playing cards, we can put them on the table and make comparisons,” he says.

Cronin would like to be able to do that same type of analysis with collaborators around the world. To that end, his group is working on using the motion-sensing properties of the Microsoft Kinect, a video-game controller. The idea is that they would scan the model back into the computer with the Kinect, and remote collaborators could see a virtual version of the molecule moving as Cronin moves the physical model.

“What will be really interesting is if we actually use it as a collaborative tool to do new science,” Cronin says. “I don’t want chemistry to be reduced to plastic trinkets. I want new science to occur as a result of use of ubiquitous 3-D printing and molecular design.”