Companies that qualify get tax advantages over competitors

SHARP RISE
[+]Enlarge
The value of master limited partnerships has increased 10-fold over the past decade.a As of October 2013.
SOURCES: FactSet, National Association of Publicly Traded Partnerships, Wells Fargo Securities 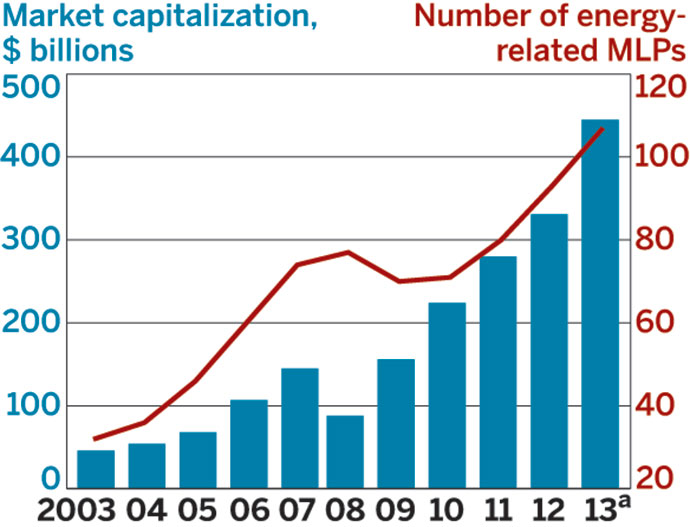 The value of master limited partnerships has increased 10-fold over the past decade.a As of October 2013.
SOURCES: FactSet, National Association of Publicly Traded Partnerships, Wells Fargo Securities

Westlake Chemical did something earlier this spring that other chemical makers—with assets that qualify—will no doubt try to imitate. It became the industry’s first major company to establish a master limited partnership, or MLP, for its basic petrochemical operations.

The new firm, Westlake Chemical Partners, will control Westlake Chemical’s ethylene crackers in Louisiana and Kentucky as well as an ethylene pipeline. It will trade, with its own ticker symbol, on the New York Stock Exchange.

However, Westlake isn’t creating the company in the same way that, say, Monsanto spun off Solutia in 1997. Day-to-day operations will hardly change. Westlake Chemical Partners will supply 95% of its ethylene to Westlake Chemical’s polyethylene and polyvinyl chloride operations. Westlake Chemical will control the new firm. The two entities will even share the same headquarters and management.

But to investors and the Internal Revenue Service, the difference is enormous. For tax purposes, MLPs are treated in much the same way as a family-owned laundromat, except on a much larger scale and with many more partners who can buy and sell their “common units” on public stock exchanges.

MLPs are what are known as pass-through entities; they don’t pay federal corporate income taxes. Instead, the common unit holders pay taxes on the partnership’s earnings at their own personal tax rates. This avoids the double taxation—first the corporate tax on earnings and then personal taxes on dividends—inherent in the ownership of a regular corporation’s stock.

Additionally, the cash distributions (akin to traditional dividends) that MLPs pay to investors are not all treated as taxable personal income. Rather, some portion, often a majority, is treated as a tax-free return of some of the capital that investors already paid to buy their common units. Taxes are reckoned when the investor eventually sells the common units.

The investing pool for MLPs—affluent individual U.S. investors—is not small. According to Wells Fargo Securities, the market capitalization of energy-related MLPs was $445 billion last year.

Firms like Westlake Chemical that sponsor MLPs enjoy big advantages. Because they don’t have to pay corporate income tax, MLPs have a leg up on firms that do. This plus the loads of cash they distribute to investors allows MLPs to command higher valuations than ordinary corporate stock.

In other words, the mere organization of an MLP can create value out of a set of assets. Laurence Alexander, a stock analyst with the investment firm Jefferies, analyzed different MLP scenarios after Westlake’s announcement. According to his model, LyondellBasell Industries could create up to $20.87 per share in value if it formed an MLP for its ethylene operations. Dow Chemical could rake in $5.75.

As the general partner, the companies that form MLPs get to retain control, even with a relatively small equity stake. They need not worry about a hostile takeover or a shareholder insurgency.

This is important for companies considering forming MLPs because they tend to be highly integrated, according to Tim Fenn, a partner with Latham & Watkins, a law firm that put together 13 MLPs last year and most recently advised Westlake. Fenn gives the example of an oil company that creates an MLP out of the pipelines that feed its refineries. “You can never be in a position where somebody else comes in and takes control of the pipes and leaves you stranded at the refinery,” he says.

MLPs don’t work for every chemical company. To qualify for MLP status, a firm must derive 90% of its income from extracting, transporting, processing, or selling natural resources, usually oil and gas. Fertilizer makers qualify. OCI Partners was formed after it received a favorable ruling from the IRS allowing for methanol-producing MLPs.

The floodgates to olefins MLPs were opened in 2012, when the IRS allowed Williams Cos. to transfer its Geismar, La., ethylene cracker into its existing gas-­processing MLP.

But Fenn questions whether the IRS will expand the pie much beyond ethylene. He notes that Congress expressly forbids the formation of plastics MLPs, ruling out the possibility of, say, a polyethylene MLP. Activated carbon maker Calgon Carbon shelved MLP plans because it couldn’t muster enough qualifying income under IRS rules.

Those companies that can pursue an MLP for some or all of their operations are giving the idea serious consideration, especially given Westlake’s positive reception. The firm’s MLP announcement was greeted by a 10% spike in its stock price.

At a Goldman Sachs conference last month, Howard Ungerleider, a Dow executive vice president, said Dow was considering an MLP for an ethylene cracker and propane dehydrogenation plant it is building in Freeport, Texas. Noting the “nice bump” Westlake stock received because of its MLP, Methanex Chief Executive Officer John Floren said in April that his firm is studying an MLP for methanol plants it is moving from Chile to Geismar, La.

Similarly, during a recent conference call, LyondellBasell CEO James L. Gallogly noted that his company wrote down a number of assets during its bankruptcy five years ago. The move led to deferred taxes that work against forming an MLP. Nevertheless, Gallogly promised he would study the issue. “Obviously,” he said, “the market has reacted very favorably to Westlake’s announcement.”