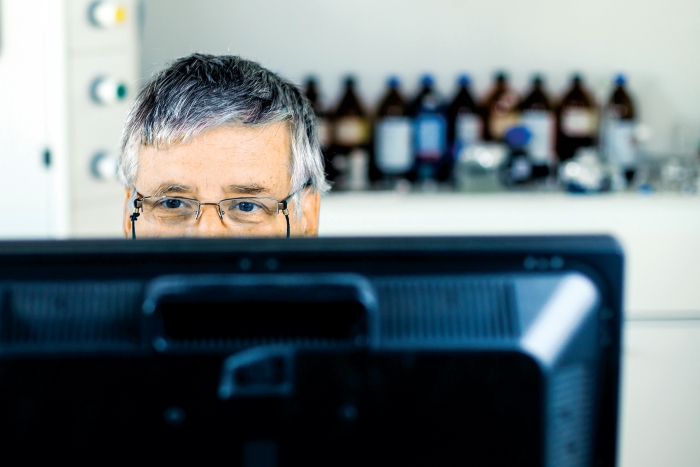 Credit: Shutterstock
Scientists spend a large portion of their time doing administrative work rather than research.

Chuan He actually enjoys working on the regular progress reports required for his federal grants—at least during the hour or two he spends reflecting on his research.

It is the dozens of additional hours that the University of Chicago chemistry professor takes filling in blanks that make the reports a burden, He says. And this problem seems to be getting worse.

He estimates he spends about half his time at work writing grant proposals, filling out progress reports, and doing other administrative tasks that leave him longing for his lab. That’s in line with national surveys that show an average of 42% of federally funded principal investigators’ time is spent on administrative issues, such as budgets, personnel issues, and review boards.

“The productivity of the entire scientific community would increase a lot if we cut everyone’s burden in half,” he says.

Almost everyone agrees that regulations are necessary to protect research subjects and to ensure that the government’s money is being spent wisely. But just as many say that the current level of paperwork has gone far beyond accountability and is actually hurting the research enterprise.

At least a half-dozen groups have taken a stab at analyzing the problem and suggesting solutions. But advocates of change face an uphill battle against an entrenched system that includes federal funders, regulatory agencies, Congress, and universities, observers say.

“It is a challenge in that everybody wants regulatory reform” yet the regulations are scattered across the government, explains Tobin L. Smith, vice president for policy at the Association of American Universities, which represents top research institutions. “It is very much a war with battles on many fronts.”

Several thousand scientists told the National Science Board their sources of administrative burden. Here are the top 10:

The problem is long-standing. Efforts to document the paperwork problem in the mid-1980s led to the creation of the Federal Demonstration Partnership, a consortium of agencies and universities that identifies and tests ways to reduce administrative burdens associated with federal grants and contracts. The partnership conducted the 2012 survey that showed 42% of scientists’ time is spent on administrative tasks.

That is the same number the group got from a similar survey a decade earlier. The types of administrative burdens may have shifted slightly, says Sandra L. Schneider, a University of South Florida psychology professor who oversaw the 2002 study. But the overall load is surprisingly persistent.

“We are definitely at a point where investigators are feeling discouraged to the point that they wonder whether science—the way it is being done—is really sustainable,” Schneider says.

Part of the problem is that the government pays for little of the time scientists spend on administrative tasks. In most cases, individual investigators are allowed to spend a maximum of 26% of grant funds for administration.

Academic scientists feel overwhelmed by the amount of paperwork required in an attempt to increase accountability. “It is not helpful and is not, in fact, decreasing risk,” says Mary Croughan, director of the research grants program office for the University of California system. “If anything it is actually harder to keep up with the regulatory paperwork.”

Federal requirements can come down from agencies, the White House Office of Management & Budget (OMB), or Congress, so there is no one way to make sweeping changes to fix the problem. Attempts to unwind all the red tape are coming from many different sides.

Congress recently commissioned the National Academies to examine the issue and suggest reforms. The Government Accountability Office, Congress’s investigative arm, is working on a report. So is a congressionally created Task Force on Government Regulation of Higher Education.

In the executive branch, OMB recently pulled all of its grants-related rules into one Uniform Grant Guidance policy and made some changes. The jury is still out on whether those reforms have helped simplify the process, observers say.

Individual agencies have been trying out streamlined approaches to address the problem. For example, the National Institute of General Medical Sciences, part of the National Institutes of Health, is considering a pilot project that would give scientists larger, long-term funding, but they could only get one grant from the agency, explains NIGMS Director Jon R. Lorsch.

The project would provide more stable funding plus eliminate some administrative burden, he says. “Writing lots of grants takes away from research time,” he says. “That is not in the interest of the scientific process.”

“A lot of different people are seeing that we have got to streamline the system,” says Stanford University’s Arthur Bienenstock, who chaired the report committee. Burdens fall into two main categories: those that come before a grant award and those required after.

Scientists reported to NSB that grant applications used to be primarily about their planned research. But agencies are increasingly asking for detailed budgets and supplemental information—provided in a different format for each funding agency—that scientists say is not essential for deciding whether a research project is worthy. 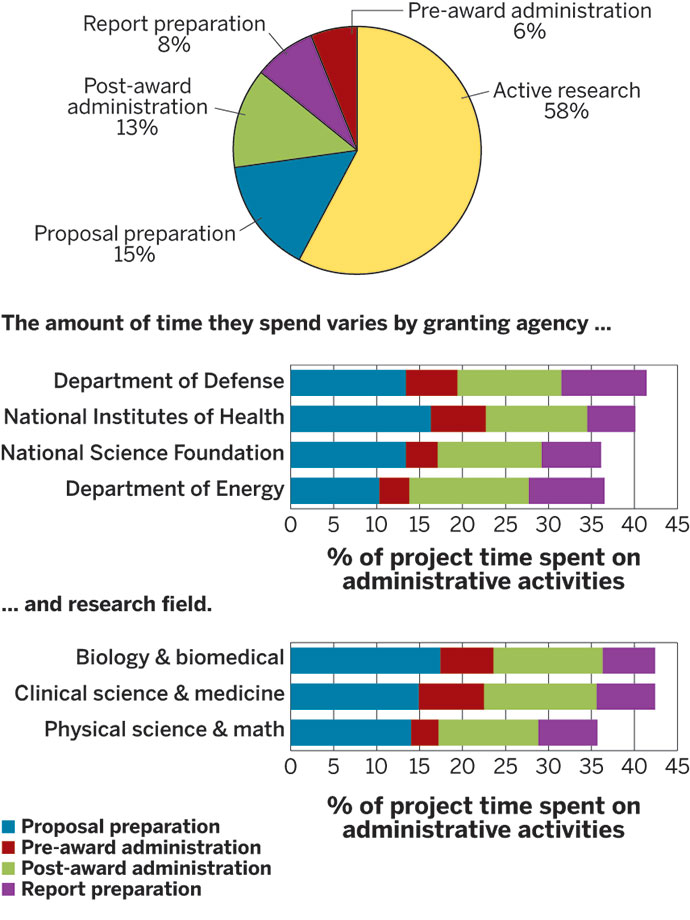 Those issues have become even more prominent now that grant-funding rates are at or near historic lows. Scientists must submit more grant applications to maintain the same level of funding. “So we have an increasing number of increasingly complex proposals,” says Wendy D. Streitz, director of research policy analysis and coordination for the University of California system.

After a grant is awarded, the burdens get worse, the NSB report shows. Training requirements, biosafety regulations, export controls, and personnel matters are just a few of the issues that require an extensive paper trail. Those who work with human and animal subjects can expect to spend even more administrative time before they can start their research.

David R. Walt, a chemistry professor at Tufts University, says he supports the need for human and animal protections. But “in many cases it is a tremendous amount of busywork as opposed to substantial, meaningful changes that affect the students or the researchers and what they are doing.” One example is grants for science education research, which have to go through an ethics review similar to the more risky experiments.

The NSB report makes several recommendations for improving the situation. It suggests that agencies only solicit information that is essential for judging the scientific merit of a grant. Also, grants could be broken into two stages, so detailed information is required only from those who are most likely to receive an award.

After conferring a grant, agencies should only collect information that is required to judge the scientific progress of a grant, NSB says. It wants to ensure that federal rules on security, safety, and export control can work for smaller university-based labs. Universities, meanwhile, can work to make ethics reviews less burdensome and more focused on managing actual risks. NSF is reviewing the report to find out what suggestions it can implement.

Overall, NSB wants a permanent high-level committee—possibly organized by the White House Office of Science & Technology Policy—to harmonize regulations and requirements among agencies for conflict-of-interest reporting and budget formats, to name only two. “To have commonality across agencies would just be nirvana,” Streitz says.

Bienenstock would like to see the amount of time scientists spend on administration cut nearly in half. But he’ll take whatever reforms he can get. “I get the sense that every little bit helps.”