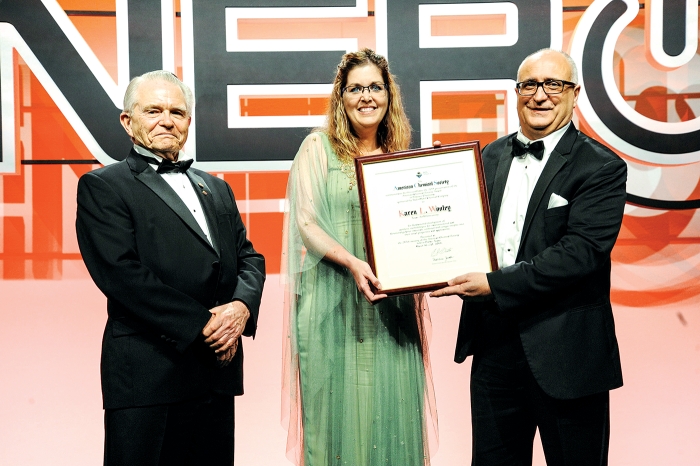 Credit: Peter Cutts Photography
Karen L. Wooley (center) of Texas A&M University accepts the 2014 ACS Award in Polymer Chemistry. She is the first woman to win the award since it was established in 1962. Several national awards have never had a female winner, a deficiency ACS is trying to overcome. With Wooley are ACS President Thomas J. Barton (left) and Jay Dias (right), representing ExxonMobil Chemical, which sponsored the award.

For a chemist, winning an American Chemical Society national award isn’t just a collective pat on the back by one’s peers; it can lead to other accolades and professional advancement opportunities.

There’s increasing concern in the chemistry community, however, that ACS’s premier recognition program unintentionally leaves out deserving candidates from a significant portion of the society’s membership. Nominees and award recipients have largely been male and from academia.

“Women chemists have been getting a growing percentage of Ph.D.s that are granted in the U.S., but this growth is not being reflected in our awards program,” notes Valerie J. Kuck, ACS director-at-large and chair of the ACS Committee on Grants & Awards (G&A), which oversees the national awards program. “What is this telling women in terms of how the scientific community values their contributions?”

Industrial and government scientists, despite collectively making up a majority of the ACS membership, also lack representation among national award nominees and award recipients, Kuck notes.

To address the issue, G&A has undertaken a five-year effort to examine its national awards nomination and selection process and has begun implementing a strategy to promote diversity and inclusion within the awards program.

ACS currently has 64 national awards, including the Priestley Medal, which is the society’s highest honor. Not every award is given each year, and some awards are given to teams of individuals. For the 2014 national awards, only 12 of the 71 recipients were female.

The lack of women awardees stems from a lack of women nominees. According to data collected from the nominee pool for the 2015 awards (winners will be announced in August), 17% of the nominees are female, while 29% of ACS members are female. For 16 of the awards—15 of which are technical awards—not a single nominee is female. Data from 2014 are similar.

“There’s no excuse that we have 16 awards for which there are no female nominees,” says Larry Krannich, chair of G&A’s Awards Equity Implementation Team. Kuck notes that where women have greater representation is on awards that recognize service, teaching, public outreach, and mentoring.

Winning awards is important for one’s professional development, notes Martha Lester, ACS staff liaison to G&A. “The more awards you win, the more prestige you get, and the more your stock goes up,” she says. That amplification effect makes the goal of equity in award nominations a matter of professional significance.

G&A has been working to address the lack of diversity among national award nominees since 2010. That year, the committee partnered with the Association for Women in Science (AWIS) on a program funded by the National Science Foundation to increase the diversity of scientific award recipients and outline best practices for other scientific societies.

As part of the AWIS partnership, G&A formed the AWARDS (Advancing Ways of Awarding Recognition in Disciplinary Societies) Task Force to review the nomination and recipient selection process used in ACS’s national awards program, identify ways of increasing the diversity of ACS national award nominees and recipients, and recommend appropriate changes to ensure equity in the selection of award recipients.

In 2013, G&A dissolved the task force and created the Award Equity Subcommittee to expand the inclusion effort to other underrepresented groups, such as industrial chemists, and come up with recommendations to improve the canvassing, nomination, and winner selection process.

The recommendations led to the formation in early 2014 of the Awards Equity Implementation Team, which replaced the Award Equity Subcommittee.

The team is helping to create partnerships among G&A and other groups within ACS, such as the technical divisions, Women Chemists Committee, Corporation Associates, Diversity & Inclusion Advisory Board, Committee on Committees, and Committee on Divisional Activities, to assemble diverse selection committees, as well as solicit nominations from diverse individuals.

In the past, “there hasn’t been a real proactive approach to soliciting nominees,” Krannich says. Now, “we’re going to partner with groups throughout the organization to solicit their assistance in putting forth nominees.”

The online nomination process will also become more user-friendly. Currently, “if I want to make a nomination, I’m not aware of what all that involves until I get online and start the process,” Krannich says. Going forward, he says, the national awards website will feature a “best practices document” that guides potential nominators through the process, thereby encouraging more people to nominate colleagues.

In addition, selection committees will be asked to judge nominees for a particular award based on standardized criteria. “We want all selection committees to judge how well the work that the individual does aligns with the award’s purpose, not just counting the number of publications,” Krannich says.

G&A can do only so much to identify outstanding individuals from underrepresented groups who are deserving of recognition; the rest will be up to ACS members to help nominate their peers whom they believe should be considered for these awards. “We can make a lot of progress just by helping ACS members participate more effectively in the process of getting people in the pipeline and getting them selected,” says Kathleen M. Schulz, who chaired the former Award Equity Subcommittee. “I think that in itself would be a big step forward.”

Geraldine L. (Geri) Richmond, Presidential Chair in Science at the University of Oregon and cofounder of COACh, which fosters leadership among women scientists, says that getting more women nominated is only part of the solution.

“We must also make sure that our women and minorities at ages 30 to 40 are getting the kinds of mentoring that they need to recognize that they could become national award winners and to encourage and mentor them to do their best science,” Richmond says. “That’s where I think we fall short.”

Women and minorities aren’t the only groups that need mentoring, however. “When you talk about diversity, it’s not just gender and racial diversity. It’s about diversity beyond the usual top academic institutions, and the inclusion of industrial and government laboratory scientists whose accomplishments may come in different forms than merely a long list of publications,” Richmond says. “There are so many incredibly talented people in industry and the government labs, and they are largely invisible in the awards process. How can we more effectively mentor them and make the selection committees recognize them as viable candidates?”

It will likely involve a cultural shift, says Lester. “A lot of the big universities actually have teams of people who are responsible for nominating their colleagues for different awards, and that’s a well-oiled machine,” she says. “It’s not as important to industry.” In addition, she adds, “most of our awards are for individuals, and in industry, they operate in teams.”

Krannich hopes that efforts by G&A, as well as the ACS membership as a whole, will add to the dialogue about how to increase diversity and inclusion in ACS so that all chemical professionals have an equal opportunity to be recognized for their work and advance in their careers.

Nominations for the 2016 national awards will be open from July 1 to Nov. 1. For more information, or to nominate someone, visit www.acs.org/nationalawards.

Comments
Jeff Long (June 12, 2014 3:02 PM)
Once an award is made, awardees seem to be more likely to win more. This may reflect the worthiness of the candidates, but may also reflect a tendency for nominators to make note of a scientist upon (his/her) winning an award, and then nominating that same person for other awards. I suspect that both nominations for awards and deliberations of awards committees are positively influenced by nominees having already won an award. However, such practices reward deserving nominees but also keep awards within a narrow, self-perpetuating track.
Reply »