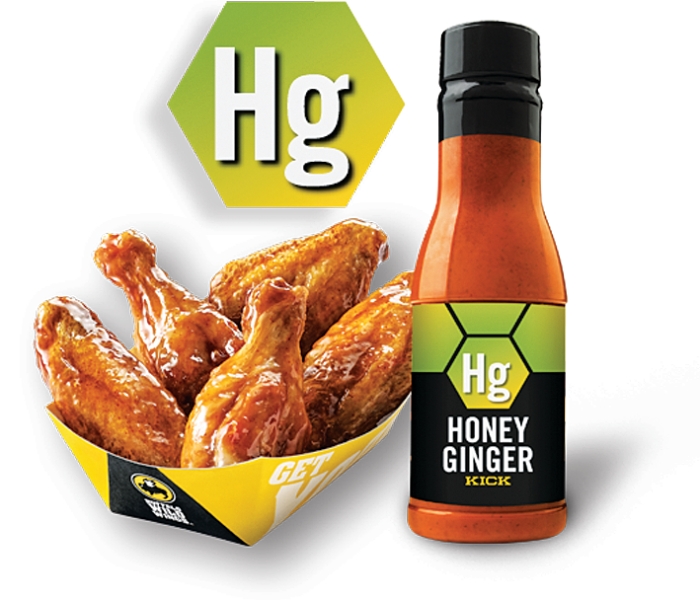 A note recently came in over the electronic transom bearing the subject line “Mercury Wings.” Initially, the Newscripts gang wondered what the Roman god, often depicted wearing a winged helmet and winged footwear, has to do with quirky science. But the wings in question aren’t of godly origin. Rather, they’re from purveyor of poultry Buffalo Wild Wings.

Brendan Nytes of Elgin, Ill., noticed that the latest offering from the restaurant chain’s B-Dubs Sauce Lab is called Honey Ginger Kick, which is abbreviated on the bottle, menu, and promotional materials as Hg. The letters appear inside a hexagon, the geometric shape of choice when trying to evoke chemistry, it seems.

Apparently, the allusion to elemental mercury’s atomic symbol was noted by many visitors to Buffalo Wild Wings. “We’re impressed that our guests remember from high school chemistry that the chemical symbol for the element mercury is Hg, but it is actually the abbreviation for our new limited-time sauce, Honey Ginger,” reads a statement from the restaurant chain. “We can assure you that there is no mercury in our Honey Ginger sauce and that Hg only means Honey Ginger at Buffalo Wild Wings.”

Buffalo Wild Wings’ website also states on its Honey Ginger Kick page: “Product does not contain Mercury.” Despite the capitalization, we presume the restaurant means the element and not the god.

“Apparently, these things come in streaks,” writes Christopher Palenik of Geneva, Ill., who brought Nytes’s observation to our attention. “A few days earlier, I came across something else unusual and possibly relevant to your page. While I am used to seeing stores with names that play off of H2O, I came across a store in Birmingham, Mich., that was titled H2O2. Upon inspection, it logically turned out to be a salon.”

Speaking of water, the Newscripts gang recently read reports in the British press of “the world’s first drinkable sunscreen.” The product, Harmonized H2O from Colorado-based Osmosis Skincare, prompted the Daily Mail to breathlessly promise: “The days of carrying bottles of suncream to the beach could be over.” 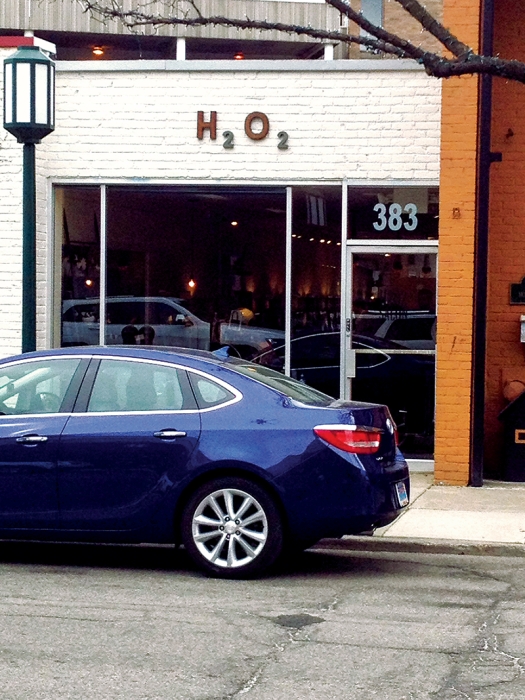 Credit: Christopher Palenik
Salon science: We’d get our highlights at this establishment, located in Birmingham, Mich.

So what is the purported science behind Harmonized H2O? According to a blog post on the company’s website, “Harmonized H2O has frequencies that are held in its water molecule that protect us from UV energy waves. Once the water is consumed, it will take an hour (on an empty stomach) to reach the skin before that protection can occur. The UV Protection waves are then able to counteract the suns [sic] UV waves that come in contact with our body thereby neutralizing any UV radiation.” Each 100-mL bottle retails for $30.

News outlets other than the Daily Mail, thankfully, were more skeptical. The British Association of Dermatologists also put out a statement in response to the press coverage in the U.K.: “The formulation is 100% water and, as far as our experts are concerned, it is complete nonsense to suggest that drinking water will give you a Sun Protection Factor (SPF) of 30.”

The Newscripts gang thinks the Guardian’s Dean Burnett put it best in his debunking of the product. “If unscientific claims were an illegal substance,” he writes, “this product would be so illegal that anyone caught possessing it would be instantly shot. Into the sun.”

Comments
R. Lee Shearer (June 6, 2014 4:18 PM)
"The letters appear inside a hexagon, the geometric shape of choice when trying to evoke chemistry, it seems."

Perhaps the shape was meant to represent a honeycomb, the hexagonal cells located in bee hives where among other things they store honey.