REEEALLY SLOW
Credit: Proc. R. Soc. B/YouTube
In this clip, a wild slug takes a turn on an exercise wheel in an outdoor cage.

In Johanna Meijer’s lab at Leiden University Medical Center, in the Netherlands, it’s not unusual to see mice working up a sweat on running wheels. Among other topics, Meijer studies how exercise affects nerve circuits in the animals’ brains.

Even though running wheels seem like a logical tool for this line of work, some scientists question whether the devices are skewing experimental results. “Now and then, I get a question about running wheels indicating pathological behavior,” Meijer says. Mice in the wild don’t use exercise wheels, she says, so it’s possible that captive rodents do so compulsively, because they’re sick mentally or physically.

Meijer didn’t think this was the case, but still, the idea did make her wonder whether wild mice, free to do as they like, would choose to take a spin if a wheel were available.

Turns out, not only do wild mice hop on exercise wheels voluntarily, so do wild rats, shrews, frogs, and even slugs (Proc. R. Soc. B 2014, DOI: 10.1098/rspb.2014.0210). Meijer designed two cagelike structures with small, open doors and a running wheel inside. One was placed in the woods in her backyard, and the other got situated in protected dunes near her university.

Between 2009 and 2013, a bevy of animals visited the structures, where their movements were recorded by a motion-sensitive camera. Not surprisingly, when food was present inside the cages, animals visited more often than when it wasn’t. In the absence of food, however, the percentage of cage visits that included a spin on the wheel increased. “So it wasn’t the food that made the animals run,” Meijer explains.

When Meijer and colleague Yuri Robbers published their results, they included YouTube videos of a wild mouse, frog, and slug on an exercise wheel to illustrate the experiment. With more than 140,000 views, the clip of the slug, by far, has been most popular. “Everybody finds it funny,” Meijer says. “The wheel turns reeeally slowly.”

Credit: Shutterstock/C&EN
Spinning wheel: If you build it, frogs, mice, and slugs will come.

Something else that moves at a sluggish pace—at least according to Marin Berovič—is the process of champagne making.

Winemakers in France put the bubbles in bubbly using a technique, invented in the 1800s, called méthode champenoise, explains Berovič, a biochemical engineer and professor at Slovenia’s University of Ljubljana. “But we’re now in the 21st century,” he says. And he’d like to speed up the elaborate process with a little help from nanotechnology.

[+]Enlarge
Credit: Biochem. Eng. J.
Settling down: A magnet draws nanoparticle-coated yeast into the neck of a sparkling wine bottle. 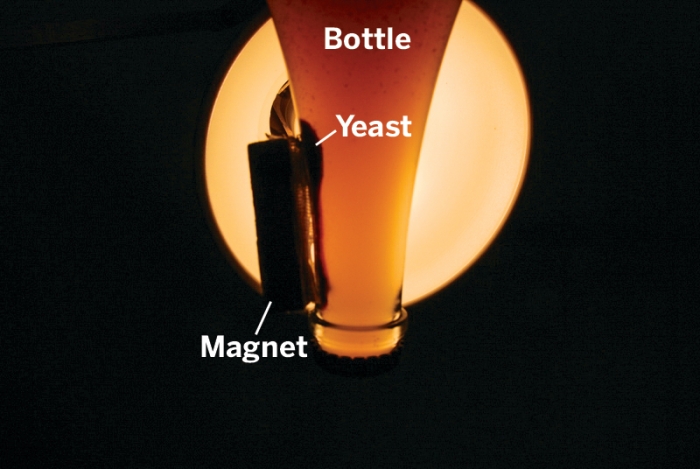 Credit: Biochem. Eng. J.
Settling down: A magnet draws nanoparticle-coated yeast into the neck of a sparkling wine bottle.

At the start of the méthode champenoise, wine and a little bit of yeast and sugar get added to bottles, which are then capped and stored for at least a year. During this time, the yeast feed on the sugar to make carbon dioxide.

When it comes time to remove the yeast, winemakers place the bottles into racks neck down at a 45° angle. For 24 to 60 days, either a machine or a person periodically shakes and rotates the bottles to help settle the organisms near the bottle’s cap for eventual extraction.

Berovič says nanoparticles can help the yeast travel down the bottle’s neck during this “riddling” step more quickly. To prove it, he and his team added magnetic nanoparticles—beads made of iron oxide and coated in a layer of positively charged aminosilane—to fermenting wine. The particles stick to yeast because it has a negatively charged outer membrane.

“You don’t need all that rotation by hand,” Berovič says of his patented approach. “And you don’t need to invest in expensive shaking machines.”

Astrochemistry
Industrious bees fill in for coworkers, inspire Mars mission
Biological Chemistry
How oysters and whales are more like us than we thought
Awards
2017 Ig Nobel Prizes
Share X
To send an e-mail to multiple recipients, separate e-mail addresses with a comma, semicolon, or both.
Title: Running Wild … On An Exercise Wheel, Modernizing Champagne
Author: Lauren K. Wolf
Chemical & Engineering News will not share your email address with any other person or company.