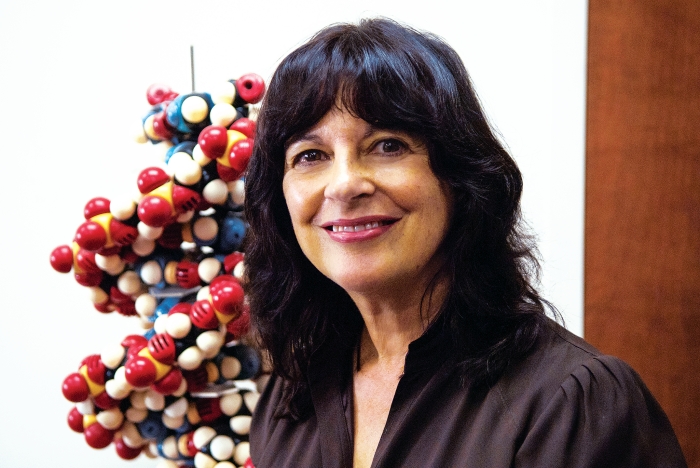 Barton, 62, is receiving the award for her work on electron transport in DNA, her dedication to training young investigators, and her unwavering support for the chemistry enterprise, ACS announced.

During her tenure at Caltech, Barton’s research group has been focused on studies of the recognition and reactions of DNA, designing metal complexes as probes of DNA, and exploring how DNA is damaged and repaired using DNA charge transport ­chemistry.

“This is really an extraordinary honor for me,” Barton says. “It is also very special to be able to highlight and honor my students and coworkers. It has been a privilege for me to work with them. They are the ones who have had the courage to ask tough questions and carry out hard experiments to unravel new things about the chemistry of DNA.”

Madeleine Jacobs, ACS executive director and chief executive officer, noted Barton’s role as a scientist and as an inspirational model for women in chemistry. “Jackie Barton is an outstanding choice to be the 2015 Priestley Medalist,” Jacobs says. “She combines path-breaking research with service to the chemical profession in many arenas. She has also been a superb role model, not just for young women but for all young scientists, in her ability to balance her professional and personal life.” Barton is only the third woman to win the Priestley Medal.

Barton’s colleagues praised her scientific contributions to the understanding of electron transport in DNA from its fundamental nature to its implications for biological processes. They also noted her influence on her peers and those she has mentored throughout the years.

“I am very proud of Jackie,” says Stephen J. Lippard, a chemistry professor at Massachusetts Institute of Technology who served as Barton’s graduate adviser. “Her wise counsel and enthusiasm for science have enriched the lives of all those privileged to know her. She is a splendid choice as Priestley Medalist.”

Harry B. Gray, also a chemistry professor at Caltech, concurs. “Jackie Barton is a world leader in biological inorganic chemistry,” he says. “She has made countless contributions to the chemistry enterprise, most especially in training young men and women who now occupy prominent positions in academia, industry, and government.”

Barton completed her Ph.D. in 1978 with Lippard, who was then at Columbia University. After a postdoctoral position at Bell Laboratories, she returned to Columbia, rising through the ranks to become full professor in 1986. In 1989, Barton moved to Caltech, where she has been for the past 25 years. She has been division chair since 2009.

She has numerous awards under her belt, including the ACS Award in Pure Chemistry, a MacArthur Foundation Fellowship, and the NSF Alan T. Waterman Award. She has also received the National Medal of Science.

Barton has served on the editorial boards of numerous journals, including the Journal of the American Chemical Society. She has also served on the board of directors at Dow Chemical since 1993.

Comments
Susan Schwartz-Giblin, PhD, Professor and Dean Emerita (June 18, 2014 10:23 AM)
It was too bad that Jacqueline Barton's undergraduate degree from Barnard College was not mentioned in her profile. We scientists who graduated from Barnard in the 50s and 60s are proud of our accomplishments and her achievements.
Reply »