C&EN Talks With A. N. Sreeram 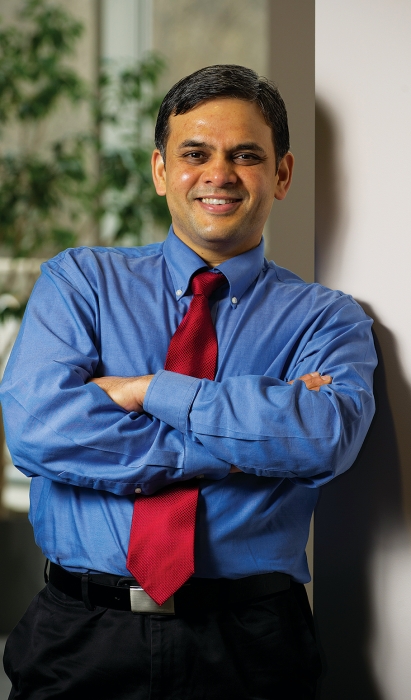 A. N. Sreeram, 46, who since October has led Dow Chemical’s $1.7 billion-per-year R&D effort, says he wasn’t looking for a change when Dow contacted him about a job in 2006.

“I had a great job at DuPont and a great potential career there too,” Sreeram recalls. A ceramics engineer with a Ph.D. from Massachusetts Institute of Technology and more than 20 electronics-related patents to his name, Sreeram was the chief technology officer at DuPont Electronic Technologies.

But when Dow beckoned, offering him a job as head of its central R&D organization, Sreeram was intrigued. “The opportunity seemed very attractive,” he recalls.

Dow’s chief executive officer, Andrew N. Liveris, was in the process of getting the firm to focus more on specialty products and less on commodity chemicals, with their gyrating profits and losses. Sreeram saw the job Dow offered him as a way to make a difference at a company with a very big footprint.

Now as corporate vice president of R&D, he is bringing his engineering talent to a global R&D organization, 6,300 scientists strong, that emphasizes the use of high-throughput experimentation techniques. The job is also giving him a platform at the largest U.S. chemical maker to champion high-impact chemistry advances that customers are willing to pay for.

As a youngster, Sreeram says, “solving problems is what got me excited.” The people around him as he grew up in India were interested in science and engineering, and that led him to the belief that scientists and engineers are in the best position to solve many of humanity’s problems.

As head of Dow’s central R&D organization, “I was looking for how we could make big changes in the way we solved problems.” As far back as 1999, Dow was using equipment from the high-throughput experimentation specialist Symyx Technologies, now Freeslate, to screen thousands of molecules for new products. Sreeram saw an opportunity to make the rapid experimentation technique more effective.

He did so by reorganizing the high-throughput teams focused on new materials for plastics and coatings to include more than just organic chemists and a few materials scientists. To be effective “you need a lot more materials scientists, and you also need machine language and robotics experts as well as a reasonable number of Ph.D. statisticians,” he says.

Typically, only one out of 100 high-throughput samples has potential as a new coating or plastic, Sreeram explains, “but the small number of hits doesn’t bring you closer to solving a problem.” Planning experiments carefully might give a 1-in-10 chance of success, he says. “Where we have deployed high-throughput experimentation, we have increased our chance to three out of four in delivering a new product with the features and benefits we and our customers want.”

Bringing in additional experts has allowed Dow to do more than just increase productivity, Sreeram tells C&EN. “Nonobvious solutions that we would not have thought possible all of a sudden become extremely important. The way we practice high-throughput experimentation has greatly improved our R&D productivity.”

When Dow bought Rohm and Haas in 2009, Sreeram was tapped to lead R&D for many of the new businesses. As vice president of research for advanced materials, he brought the use of high-throughput experimentation to businesses including materials for electronics, his original love, and paints and coatings.

In the paint business, Sreeram says, high-throughput experiments can be designed to yield a variety of useful molecules. That way, he says, “we can provide different solutions for all our customers. They would all have access to different intellectual property.”

In the electronics world, Dow created new photoresists by applying its high-throughput expertise to polymers it had developed for personal care products. Transferring technology from one business to another, albeit with some refinement, has its advantages, Sreeram points out. “Photoresists can sell for a lot more many personal care product ingredients,” he says.

Sreeram became head of corporate R&D last year when his predecessor, William F. Banholzer, retired to teach at the University of Wisconsin, Madison. He plans to continue many of Banholzer’s initiatives such as efforts to retain talented scientists and recruit new talent. Also, Dow’s $25 million-per-year research alliance with universities including California Institute of Technology, Northwestern University, and the University of Wisconsin will continue, he says.

Some things will be even more important than they were before, Sreeram says. “We will put greater emphasis on collaborating with customers because that’s what it takes to commercialize new products faster. I want to have a seat at our customers’ design tables.”

But Sreeram cautions, “we will not get involved in any big endeavors that are only R&D driven. We can invent great technology, but if we don’t have a high enough probability of getting paid for it, then we won’t be doing it.”

R&D at Dow works differently than it does at an enterprise such as the National Aeronautics & Space Administration, for example, where making a profit for investors isn’t the goal, Sreeram notes. “NASA may spend $1 billion to develop one prototype, like a satellite, that may ultimately improve the lives of millions of people. For a billion bucks, a company like Dow wants to make millions of products that people will buy and pay a premium for because it also improves their lives in some way.”

Business
Introducing DowDuPont
Business
Trian Says DuPont Must Do More
Business
Dow Earmarks More Units For Sale
Share X
To send an e-mail to multiple recipients, separate e-mail addresses with a comma, semicolon, or both.
Title: C&EN Talks With A. N. Sreeram
Author: Marc S. Reisch
Chemical & Engineering News will not share your email address with any other person or company.