RBC DECORATION
[+]Enlarge
Credit: Adapted From Proc. Natl. Acad. Sci. USA
In a new technique, RBC precursor cells are engineered to express a surface protein (purple oval) bearing a sortase substrate sequence. After cells develop into RBCs, sortase is added to form an RBC-enzyme intermediate. A modified drug then reacts with the intermediate to form an RBC-drug conjugate. L is leucine, P is proline, X is any amino acid, T is threonine, G is glycine, and HA is hemagglutinin. 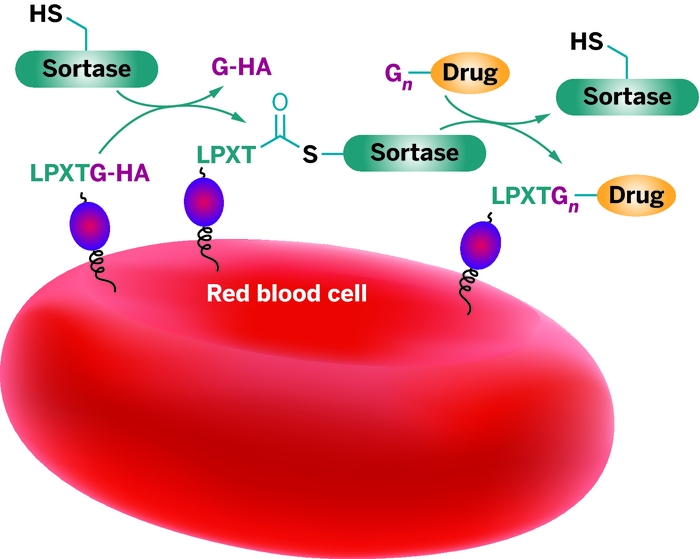 Credit: Adapted From Proc. Natl. Acad. Sci. USA
In a new technique, RBC precursor cells are engineered to express a surface protein (purple oval) bearing a sortase substrate sequence. After cells develop into RBCs, sortase is added to form an RBC-enzyme intermediate. A modified drug then reacts with the intermediate to form an RBC-drug conjugate. L is leucine, P is proline, X is any amino acid, T is threonine, G is glycine, and HA is hemagglutinin.

Researchers have devised a new way to use red blood cells (RBCs) to carry drugs and other agents round and round in the bloodstream, potentially for over a month or more.

The strategy tethers drugs, vaccines, diagnostics, or small molecules to RBCs—the most numerous type of cell in the body—in a way that greatly enhances the agents’ active lifetime. The approach could be particularly valuable for diagnostic agents or chronic disease treatments that are most effective when administered continuously over long periods of time.

Drugs alone typically persist in the bloodstream for only a few hours or perhaps a day. When conjugated to liposomes or nanoparticles, they generally last a few days. When attached noncovalently to RBC surfaces or encapsulated inside RBCs—introduced through a hole in the membrane—they hang around for perhaps a few weeks.

They engineer mouse or human RBC precursor cells to express a surface protein bearing a sequence recognized by the enzyme sortase. Once the cells develop into RBCs, they add sortase, forming a covalent RBC-enzyme intermediate. A modified drug can then react with the intermediate, expelling sortase and yielding an RBC-drug conjugate. Sortase-based cell-surface labeling is an established technique, but this is the first time it’s been used for diagnostic or therapeutic purposes.

It’s “a totally new approach that could have wide applicability in the area of drug targeting,” comments Mauro Magnani, an RBC-based drug delivery expert at the University of Urbino, Italy.

Potential applications include reducing cholesterol in blood, treating strokes or thrombosis with clot busters, and using antibodies to treat chronic inflammation. Two agents can also be attached to RBCs simultaneously. An anticancer drug could thus be combined with a cancer-targeting agent to deliver it specifically to a tumor.

“I am surprised and delighted by the idea,” comments Vladimir R. Muzykantov of the University of Pennsylvania Perelman School Of Medicine, who has worked on RBC drug delivery since the 1980s. “Pending demonstration of efficacy and safety in vivo, this could be on a short track to clinical testing.” Immunogenicity and cancer-causing potential of the RBC conjugates have yet to be evaluated.

“It’s elegant,” says Jeffrey A. Hubbell of the Swiss Federal Institute of Technology, Lausanne, an expert in noncovalent RBC modification. But he notes that other RBC carrier approaches don’t require this method’s genetic engineering step. And it remains to be seen whether the conjugates’ extended action could be a liability in certain circumstances, he says. “Kill switches” may be needed to turn off activity when treatment doesn’t go well, he suggests.

The MIT group is involved with a Cambridge, Mass.-based biotech firm, Rubius, that aims to commercialize the technology. It may have a lot of company. Other firms in the burgeoning RBC drug delivery game include Anokion, in Lausanne; Targeted Therapeutic Solutions, in Philadelphia; Erytech Pharma, in Lyon, France; Orphan Technologies, in Rapperswil, Switzerland; and EryDel, in Urbino.