The oxidative coupling of methane into ethylene is one of the knottiest problems in all of petrochemistry. Some of the biggest names in the field—including Union Carbide and Arco—tried, but they didn’t come close to a process that could compete with the steam cracking route to ethylene. Despite the odds, the San Francisco-based start-up Siluria Technologies decided to have a go at it.

In only about five years, Siluria appears to have taken the chemistry, known as OCM, further than any of its predecessors. It has reported encouraging results at the pilot scale. It is nearing completion of a demonstration plant. Experienced partners have signed on to develop and license the technology. And within the next year, Siluria’s managers hope to have a process good enough to sell to industry.

If Siluria succeeds, it will deliver technology that petrochemical producers have long coveted. Methane is cheaper and more plentiful than the naphtha and ethane traditionally converted by steam cracking into ethylene and other olefins. Plus, crackers, which operate at temperatures of more than 800 °C to break carbon-carbon and carbon-hydrogen bonds, generate a hefty energy bill. OCM, in contrast, is exothermic.

But there’s a catch. OCM is a roller coaster of a reaction. 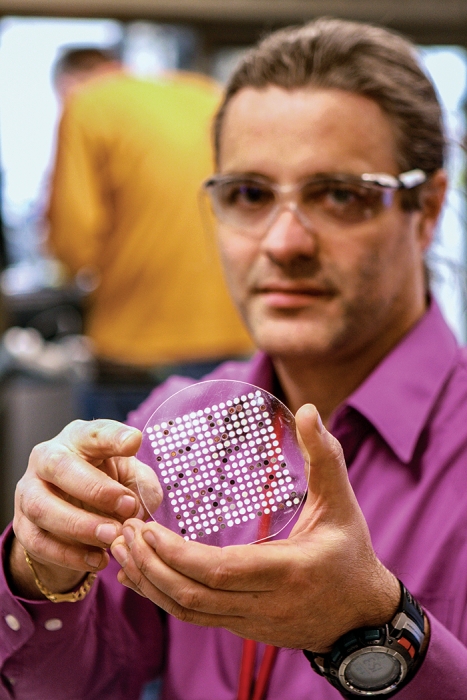 Madan Bhasin, chief scientific adviser of the Mid-Atlantic Technology, Research & Innovation Center in South Charleston, W.Va., was a central figure in Union Carbide’s OCM efforts in the 1980s and 1990s.

As he recalls, a temperature of about 800 °C was needed to start the OCM reaction. The exothermic reaction would then drive the temperature above 1,000 °C. Flammability concerns limited the amount of oxygen that could be fed into the reactor.

Striking a balance between selectivity and pressure was also tough, according to Bhasin. The process needs selectivity of more than 70% to be economical, but achieving it at the pressure of 5 to 10 atm needed for a successful commercial process proved challenging. Carbide was able to get its pressure and selectivity up to acceptable levels, he says, but the firm discovered in microreactor trials that the catalysts used to do it lasted only “a couple of months.”

Siluria officials say they have broken through the barriers that halted past research efforts. At a technology seminar held in Houston during the IHS World Petrochemical Conference last spring, Guido Radaelli, Siluria’s vice president of engineering, announced that the company had matched the selectivity and conversion results of previous efforts. However, he said Siluria did it at much lower reaction temperatures, substantially higher pressures, and catalyst lifetimes measurable in years rather than months.

One is the catalyst platform. Siluria was founded in 2008 to exploit biological templating technologies developed in the Massachusetts Institute of Technology laboratories of Angela M. Belcher. These include depositing the metal oxide catalyst on viruses to form nano­wires. The technology, Dineen notes, wasn’t available 10 years ago, much less 25.

In addition, Dineen, who was with Arco at the time of its OCM program, points out that researchers 25 years ago didn’t have the high-throughput screening tools that Siluria has used to refine its catalysts. “We have screened maybe 70,000 catalysts over the last few years,” he says. “Arco would be lucky to do one a month.”

At the heart of Siluria’s process is a reactor that is divided into two sections. One is the OCM section, where Siluria’s catalyst converts methane into ethylene and ethane. The coproduct ethane drops down into a second section that cracks it into ethylene.

Unlike in conventional ethane cracking, which uses furnaces to generate the heat needed to break bonds, the exothermic OCM reaction itself provides the energy needed. Operators are also free to add ethane as additional feedstock.

Others have taken notice of Siluria’s results. To date, the company has raised more than $65 million from investors. In January, Siluria hooked up with the Brazilian petrochemical maker Braskem to study the feasibility of deploying the technology at Braskem facilities.

Siluria is building a demonstration unit at Braskem’s site in La Porte, Texas. The McMansion-sized plant will have the capacity to produce 1 ton of ethylene per day when it is completed this fall. “It is obviously not a pilot plant or a toy,” Dineen says. By the first quarter of next year, Dineen hopes to replicate the pilot-plant results the company achieved at its laboratories in California.

Siluria is also partnering with the German engineering firm Linde, which is a major supplier of ethylene steam cracking technology. The pair will flesh out a final design for a commercial OCM process, which Linde will market to the ethylene industry. The companies hope to have it ready by the second half of 2015.

Customers are already starting to line up. In addition to its work with Braskem, Siluria is about to commence a feasibility study for another, non-North American chemical maker, according to Dineen.

Siluria is pitching the technology as an alternative to naphtha cracking in places where natural gas is cheaper than oil. OCM also might be a good fit in the Middle East, Dineen says, where new projects are being fed naphtha because the region doesn’t have enough ethane to accommodate additional ethane-based crackers.

Customers would like an energy advantage, but whether OCM provides one will depend on what it is being compared with. According to Siluria’s own analysis, which combined the hydrocarbon requirements for both energy and feedstocks, OCM comes out a little behind ethane. But against naphtha “we look a lot better,” notes Erik Scher, Siluria’s vice president of R&D.

Don Bari, a consultant with IHS Chemical, has conducted a thorough review of Siluria’s process and has reached some of the same conclusions that Siluria has. Feedstock savings could drive use of the process in regions where natural gas is cheaper than oil, he says.

Compared with naphtha crackers, capital cost savings should be another big factor, Bari points out. Largely because of the equipment needed to handle coproducts such as propylene and butadiene, naphtha crackers are expensive to build. OCM units wouldn’t have to handle as many molecules.

Ultimately, Bari figures, OCM should be able to find a niche. “It is not meant to take over the world,” he says. “It is meant to have a place alongside conventional ethylene production.” In a world ethylene market of more than 130 million metric tons per year, even a niche place should mean plenty of business for Siluria.

What is the conversion ratio ?

Florence Bradley (January 13, 2015 4:46 PM)
Is this technology ultimately to be used to make gasoline for vehicles. And, if so, what kind of vehicle will use this "new gasoline?". Will it work in vehicles without modified engines? Do you have a timeline for implementation of this technology? Thank you.
Reply »

Dick Duffy (January 13, 2015 6:05 PM)
So, looking into the future, a motorist may be able to fill up with indirect natural gas in the form of ethylene. And do this at ambient temperatures and atmospheric pressure (just like gasoline from oil)? This is quite a game-changer to say the least.
Reply »

Alex Tullo (January 16, 2015 10:28 AM)
Florence...I believe they are talking about conventional fuels...But I don't know where their resultant products fall in terms of specs...Dick Duffy...It could be...but they'll need some cheap ethylene.
Reply »