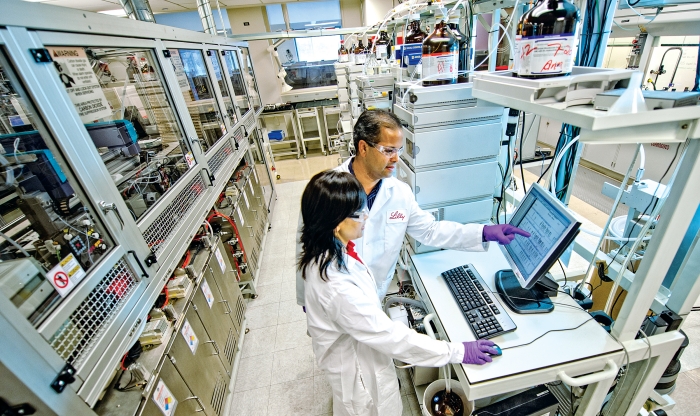 An election-year political skirmish in the U.S. Senate is threatening the reinstatement of a tax incentive that’s cherished by biotechnology and pharmaceutical companies, chemical manufacturers, and other research-intensive industries.

The federal tax credit for companies that invest in research and development (R&D) is one of the most widely used corporate tax breaks. More than 20,000 U.S. businesses—many of them small—typically claim the credit to lower their tax obligations. The credit means companies have more money available to invest in future innovation.

“The tax credit is largely a jobs credit—70% of credit dollars are used to pay the salaries of highly skilled R&D workers in the U.S.,” adds William R. Carteaux, CEO of SPI: The Plastics Industry Trade Association.

The R&D tax credit, which gives businesses a tax break for up to 20% of qualifying research expenses, was enacted in 1981 as part of a financial stimulus package. At the time, many lawmakers expressed fear that the U.S. was falling behind Japan economically. The credit was offered as a temporary tax break to encourage companies to pursue discoveries and advances that could help the U.S. regain a competitive edge.

But because of its huge popularity among businesses and with both political parties, Congress has extended the credit repeatedly. Since originally expiring at the end of 1985, lawmakers renewed the tax break 15 times, usually for a year or two, and often retroactively. The most recent extension expired on Dec. 31, 2013.

The tax credit continues to enjoy broad bipartisan support, and once again, Congress is considering a retroactive renewal. But the incentive for business research is entangled in the complex political machinations on Capitol Hill. As a result, the effort to reinstate the R&D credit—along with a hodgepodge of more than 50 other expired tax breaks—now appears likely to be put off until after the congressional elections in November.

In addition to the R&D credit, the Senate tax package includes a variety of breaks. They range from production incentives for wind farms and other renewable energy technologies to special favors for Puerto Rican rum makers and thoroughbred racehorse owners.

A common myth surrounding the R&D tax credit is that workers must wear lab coats and handle test tubes for a business to qualify.

“In reality, the R&D tax credit is among the most misunderstood and underutilized opportunities taxpayers may be able to leverage,” says Eric Myers, a tax manager at Decosimo, an accounting and business advisory services firm.

It provides a nonrefundable credit against income tax to companies meeting certain criteria, Myers explains. Businesses with engineers, scientists, or other technical employees on staff may be performing activities that qualify for the credit.

The definition of R&D for tax credit purposes is fairly broad. Qualified expenses include the wages of employees who conduct research to create a new product, advance product design, or improve production processes.

Those expenses can also include the supplies used in the course of that work and a percentage of the costs associated with research that is contracted to outside entities. Only R&D performed in the U.S. qualifies for the credit.

There are two methods for computing the R&D credit.

In 2007, Congress added an alternative, simplified formula for the credit. This method provides a 14% credit for qualified research. It applies to amounts in excess of 50% of a company’s prior three-year average of qualified research expenses. Legislation passed by the House of Representatives in May (H.R. 4438) would increase the value of the simplified-formula credit to 20%.

Under certain circumstances, businesses can also claim a 20% credit if they fund qualified research at another organization such as a university or other research entity.

The legislation appeared to be headed for swift passage in April when it was unanimously approved by the Senate Finance Committee. But the measure stalled on the Senate floor in May when Republicans mounted a filibuster in connection with an unpopular levy on medical devices. That tax helps defray the cost of the still-divisive health care reform law. The GOP was incensed at Reid for denying Republicans a stab at repealing that levy through a proposed amendment to the tax legislation. Reid used parliamentary procedures to block a vote on the amendment. The majority leader took the action to shield Senate Democrats facing tough reelection battles. Reid’s move means they won’t have to choose sides on the politically sensitive Obamacare-related medical device tax before the November elections.

Industry lobbyists are disappointed that the Senate may not take up the tax package until after the elections. But they remain hopeful that Congress will once again renew the corporate R&D incentive.

“I’m quite optimistic that we will see the R&D tax credit extended this year,” says William E. Allmond IV, vice president of government and public relations at the Society of Chemical Manufacturers & Affiliates (SOCMA), a trade group representing 220 mostly small and midsize chemical companies. “There is a lot of bipartisan support for these tax extenders, including the R&D tax credit, which specifically is of great importance to specialty chemical manufacturers,” he says.

Executives from more than 40 SOCMA member companies trekked to Washington, D.C., in late April to meet with their congressional representatives and urge action on the tax credit legislation. “As a small business, we expressed our need to devote resources and intellectual capital on innovation of our processes,” says David Mielke, CEO of ChemDesign Products, a custom chemical manufacturer in Marinette, Wis. “Tax credits for R&D will help us stay ahead of global competition and hire more employees to support process development,” he says.

While the Senate is focusing on another short-term extension of the temporary tax breaks, the House of Representatives is taking a different approach. The Republican-controlled chamber is moving separate bills to make the research credit and five other business-related tax breaks permanent.

In May, the House passed the first of these measures (H.R. 4438), voting 274 to 131 to make the R&D credit a permanent part of the U.S. tax code. “Beyond having the dubious distinction of the highest corporate rate in the world, the U.S. is also the only country that allows important pieces of its tax code, like the R&D tax credit, to expire on a regular basis,” says Rep. Dave Camp (R-Mich.), chairman of the tax-writing House Ways & Means Committee. “Businesses cannot grow and invest when the tax code is riddled with instability and uncertainty.”

President Barack Obama supports embedding the research credit in the tax code. But he and most fellow Democrats oppose the House bill because it does not include a new source of government revenue to pay for the credit’s cost. Without an offset, budget analysts estimate that the R&D tax credit would increase the federal budget deficit by $155.5 billion over the next decade.

“We’re in favor of the R&D tax credit. We’d like to find a way to permanently extend it. But let’s do it in a fiscally responsible manner,” Rep. Chris Van Hollen (D-Md.) says. “When you don’t pay for it, when you put it on the credit card, at the end of the day somebody is paying for it.”

The Republican plan, Van Hollen asserts, eventually would squeeze out other federal priorities and lead to deep cuts in education and government research spending, among other things.

Business groups say Congress shouldn’t worry about offsets, insisting that the R&D tax credit will more than pay for itself by generating new economic activity. Making the research incentive permanent “could help the entire R&D enterprise in the U.S. to grow and flourish, along with the health care and economic benefits that go along with innovation,” says a spokeswoman for the Pharmaceutical Research & Manufacturers of America, the brand-name drug industry’s main lobbying group.

Advocates also argue that ending a three-decade cycle of short-term extensions would give companies an opportunity to more effectively plan and conduct R&D projects. “Innovation is at the core of the specialty chemical industry, and few things stymie innovation faster than uncertainty,” Allmond says.

However, most Congress-watchers believe lawmakers will ultimately decide to pass another two-year renewal of the R&D credit and most of the other expired tax breaks. For the next step, one that won’t be taken until near year-end, the Senate will likely substitute its own legislation for the House-passed measure and send it back to the House for concurrence. Sen. Ron Wyden (D-Ore.), chairman of the Senate Finance Committee, says he supports one last short-term extension of the bevy of temporary tax breaks. Next year, after the election, Wyden intends to launch an effort to fundamentally rewrite the muddled and complicated tax code.

“The stop-and-go nature of these tax extenders contributes to the lack of certainty and predictability America needs to create more jobs. But it makes no sense to let these incentives disappear without a comprehensive reform proposal to replace them,” Wyden says.

Allmond says Democratic and GOP leaders agree that some tax breaks should be ended or at least trimmed back to make room for higher-priority tax incentives like the R&D credit. He tells C&EN, “I think we will eventually see the R&D tax credit become a permanent part of the tax code.”