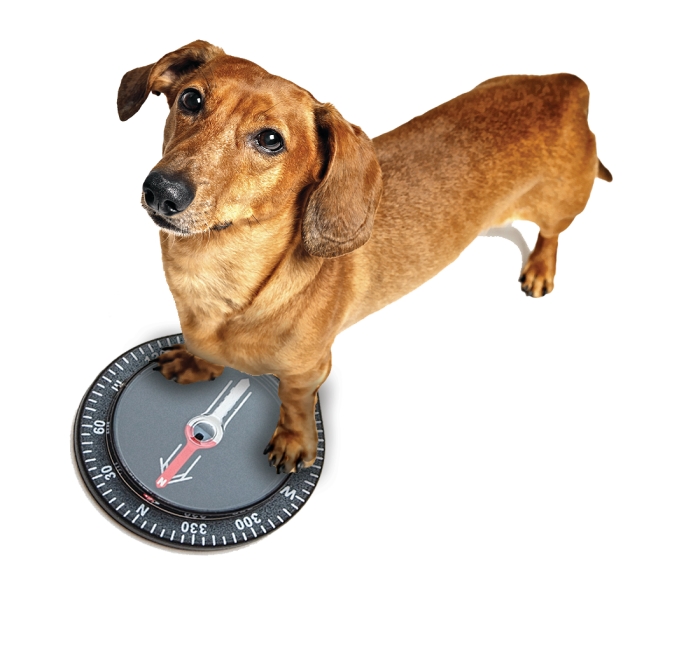 When dogs do their business, they align themselves along Earth’s magnetic axis.

This might come as big news to those who had assumed dogs don’t care about much of anything when they run untethered and uninhibited in the park. After all, canines don’t relieve themselves with nearly the fastidiousness of their feline cousins.

Or so it seemed, until a group of Czech and German researchers published a paper in Frontiers in Zoology last month saying otherwise (2013, DOI: 10.1186/1742-9994-10-80). Hynek Burda, who led the research team, is an expert in animal magnetoreception. About a year ago, he demonstrated that carp align themselves with Earth’s poles while they await purchase in water-filled barrels at Christmas markets in the Czech Republic (C&EN, Dec. 24, 2012, page 48).

For the dog study, the researchers had the help of some 37 dog owners in the Czech Republic and Germany. The participants unleashed their beagles, dachshunds, Weimaraners, and such in open fields and away from walls, traffic, and high-tension wires. With compasses, they noted the axial direction of their dogs’ evacuations and also jotted down the time and location. Altogether, they made 5,582 observations of dogs going “number one” and 1,893 observations of them engaged in “number two.”

During their data analysis, the researchers accounted for changes in magnetic declination, the angular difference between a compass’s needle and Earth’s axis. Under calm conditions, dogs align themselves along the planet’s magnetic field lines while relieving themselves, the researchers found. The authors bill their study as the first “clear and simply measurable evidence for influence of geomagnetic field variations on mammal behavior.”

But why would dogs behave this way? The researchers speculate that dogs, which have excellent homing capabilities, keep a running magnetic-visual map of their surroundings. Aligning with Earth’s magnetic fields calibrates these maps, much like a human “stopping during a hike to read a map.”

Last April, a pair of German researchers climbed a rickety ladder in the Great Pyramid in Egypt into a small room above the burial chamber of the pyramid’s presumed builder, the Pharaoh Khufu. There they allegedly chiseled a sample from the cartouche, a hieroglyphic name marker painted on the wall, and took it home for analysis. They reportedly intended to show that the pyramid substantially predates the pharaoh’s reign, which was about 4,500 years ago. 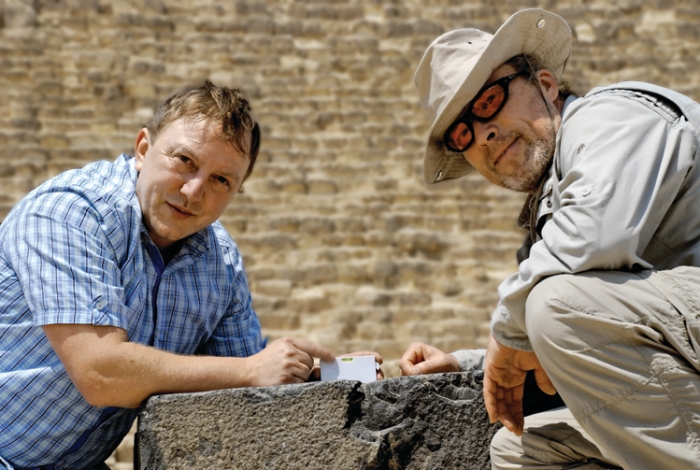 Pretty normal, right? At least for archaeology. But there’s a catch: The Ministry of State for Antiquities never authorized Dominique Görlitz and Stefan Erdmann to take samples.

Mohamed Ibrahim, who heads the ministry, is taking this seriously. The Great Pyramid is “not a quarry,” he told the Egyptian publication Al-Ahram. The German Embassy in Cairo has denounced the pair. And earnest archaeologists everywhere are bemoaning the impugned reputation of their profession.

The pair apologized. But Görlitz hasn’t responded to Newscripts’ request for comment. The gang has uncovered some clues about possible motives, though, from YouTube videos and the like. It seems that the researchers are part of a community that believes in the existence of a mysterious Planet X, which causes cataclysms on Earth when it passes nearby on its orbit around the sun every 12,000 years. With the help of Egyptian locals, aliens built the pyramid as part of a defense system against these disasters, the believers say. Understanding the true purpose of the pyramid, they think, might prevent future calamities.

Newscripts will not comment on the validity of any scientific hypothesis.