In recent years, David L. Hu has had a lot of time to contemplate urine. His wife gave birth to two children in rapid succession, and Hu, a fluid dynamics professor at Georgia Tech, was changing loads of diapers. 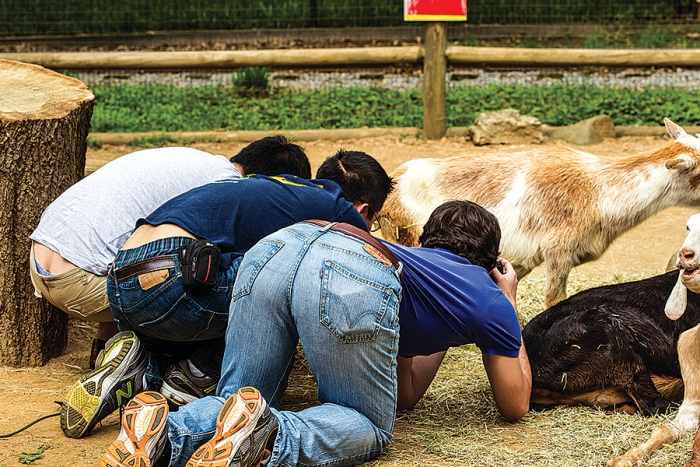 For having such small bladders, his kids took an awfully long time to pee, he thought. Would it take even longer if they had huge bladders, like elephants?

Not one to leave a scientific question unanswered, Hu decided to get his research team involved. The scientists traveled to the zoo in Atlanta and began measuring urination speed and volume for a variety of animals. What they found was unexpected. During a single bathroom break, animals ranging from an 11-lb cat to an 18,000-lb elephant took about the same time to urinate: 21 seconds on average (Proc. Natl. Acad. Sci. USA 2014, DOI: 10.1073/pnas.1402289111).

The reason urination time didn’t vary much with bladder size or body weight, the research team found, has to do with gravity and the dimensions of the creatures’ urethras. An elephant’s urethra, the tube that directs pee out of its body, is much longer and wider than a cat’s. When the pachyderm has to go, as gravity’s weight pushes down, the giant animal voids its 18-L bladder at a rapid pace, like a fire hose. The cat’s 5-mL bladder empties at a much slower pace, through its smaller urethra. But both animals’ pee sessions have about the same duration.

Hu and his group—including grad student Patricia J. Yang—derived a mathematical relation they call “the law of urination” to describe the phenomenon. Where the law breaks down is for mammals lighter than about 2 lb, the researchers say. Below this body mass, creatures’ urethras become so narrow that viscous and capillary forces dominate, and the animals’ urine comes out as tiny droplets, rather than as jets. “Animals like rats and mice, they urinate in only half a second,” Hu says. “It’s like trying to push fluid out through a coffee stirrer. And it’s so fast, you need a high-speed camera to capture it.”

A few weeks ago, the Newscripts gang brought you a tale of clandestine video games hidden in a high-performance liquid chromatography (HPLC) instrument’s control panel (C&EN, June 30, page 40). Users found the right sequence of commands to play arcade classics such as Space Invaders while waiting for samples to process.

Amused, C&EN reader Ron Sheinson of Silver Spring, Md., wrote in to tell us that programmers have been horsing around for as long as there have been programs to write. “In the early 1970s, our Finnigan mass spectrometer had a couple games on it,” says Sheinson, a 50-year ACS member. One game asked a user to enter a number from one through 10 by using the instrument’s typewriter-style keys. No matter what the person entered, Sheinson recalls, the machine would spit out, “You lose. Take off your clothes.”

Sheinson, who during the ’70s worked on an infrared spectrometer meant to analyze contaminants in liquid oxygen supplies aboard Navy ships, also remembers seeing a comedic machine at an analytical instruments show. “The pressure to unveil instrumentation first was tremendous back then,” he says. Walking among the exhibit stalls, he spotted a rival IR spectrometer that wasn’t quite ready for prime time but was making its debut anyway. When a user pushed a button for analysis, the display popped up, “Not now, I have a headache.”

“Chemists, engineers, and programmers,” Sheinson says wryly, “are a fun bunch in their own ways.”

Synthesis
Chemistry in Pictures: Be still, my giant rotovap
Education
Career Ladder: Dana Garves
Education
Twists, turns, and a terrible pain in your side; amazing mazes
Share X
To send an e-mail to multiple recipients, separate e-mail addresses with a comma, semicolon, or both.
Title: The Law Of Urination, Programmer High Jinks
Author: Lauren K. Wolf
Chemical & Engineering News will not share your email address with any other person or company.

Comments
Marie Pool (August 4, 2014 5:59 PM)
What is the purpose of the soft drink bottle in the video? In my high school chemistry lab this would be a safety violation. As a chemistry teacher I do not allow and food or drinks in the lab.
Reply »

captain obvious (August 14, 2014 2:59 PM)
I doubt the college professor doing this research cares about your high school rules and regulation. Also if you spent a moment looking at the coke bottle, it is unopened and the cap is still factory sealed, what a safety violation indeed.
Reply »