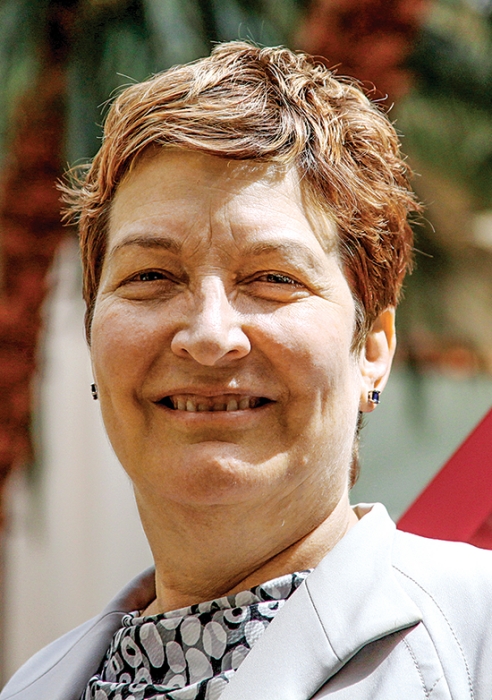 As a young chemist in the late 1970s, Janice M. Hicks thought being an atheist was a natural extension of being a scientist.

She was already struggling to fit in as a woman in science, so she didn’t question whether science and religion were compatible. But after the death of several family members, Hicks began exploring religion to address spiritual questions that science could not answer.

Now Hicks is taking a step that would have seemed unthinkable to her 20 years ago. She is leaving her job as deputy director of materials science at the National Science Foundation to pursue a master’s degree in theology at Virginia Theological Seminary.

Hicks, 56, sees this as the next step in a lifetime spent seeking answers. “I see science as more contained in the questions that it can ask—and we need to ask those questions,” she says. “But maybe there are questions that science can’t begin to answer.”

Hicks grew up Roman Catholic, but in young adulthood she asserted that she was an atheist. As a chemistry major at Bryn Mawr College, “We were very counter everything because it was the tail end of the hippie era—parents, religion, just everything,” she remembers.

Later, in graduate school and while getting her postdoc, she couldn’t see how religion fit into science. “I needed to just try to assimilate into a Western science culture,” she says. This melding was further complicated because she is gay, Hicks says.

Her view of religion changed in the early 1990s after a close family member died. Hicks started exploring different approaches to spirituality, including Buddhism and meditation, while she was a chemistry professor at Georgetown University. Eventually, she joined St. Margaret’s Episcopal Church in Washington, D.C.

When she was a practicing physical chemist, she would dive deeply into a single question, Hicks says. “That was wonderful, but if someone asked me a more horizontal question I wouldn’t have any insight,” she says. She’s looking forward to exploring a broader view of life and the universe that she anticipates studying religion will bring.

Now, “I don’t see a conflict between science and religion,” she says, adding that there are many things you can understand through science. “But in terms of understanding why we’re here, where we go when we die, all of those things, it’s a possibility that those are not going to be known to us through science.”

The more she delves into religion, though, the more Hicks is able to see similarities with science. “A lot of people think chemistry is done … then they are surprised to learn that we only know a little bit about chemistry,” she says. “Theology is the same, I think.”

People in both disciplines also fear that their fields will disappear because of lack of interest, and both groups are worried about illiteracy, whether it’s scientific or religious, among the general public.

“Both groups are panicked about the same things. It’s really ironic,” Hicks says. “But in fact neither is going away. There is nothing to panic about.”

Diversity is one area in which religion and science face similar challenges. At Georgetown, Hicks was the first female faculty member in the chemistry department, which she says was an eye-opening experience. “I started to realize that being a woman in science was sort of a big deal and people start to look at you for that. It is part of your role.”

Since then, Hicks has pushed for more diversity in chemistry, seeking to include women, people of all racial and ethnic groups, and lesbian, gay, bisexual, and transgender (LGBT) persons. Besides supporting diversity programs in the broader science community, she helped found an LGBT resource group at NSF, where she has worked since 1999 in the Chemistry and Materials Research Divisions.

“Having been a minority in science makes me feel less intimidated to face it in other fields,” she says.

Hicks has already taken a few courses at Virginia Theological Seminary, and she was usually the only student in class with a science background. Her fellow students turned to her when science questions arose, and she stepped up to debunk pseudoscience or explain misunderstood scientific principles, such as particle theory. “I feel like I’ll be able to bring a pretty good representation of science to the seminary,” she says.

Hicks remains open about what her eventual religious career will be after she finishes her degree. She’s interested in possibly ministering to the dying or elderly, which brings up both theological and scientific questions. Or she might work on a college campus or other venue where she could apply her knowledge of science.

“I’m just fortunate to be able to do this at this stage in my life,” she says.

In any case, Hicks says she will be guided by one of her favorite Bible verses, 1 Corinthians 13:12, which she believes speaks to both science and religion: “Now we see in a mirror dimly, but then we will see face to face. Now I know only in part. Then I will know fully even as I have been fully known.”

Undergraduate Education
Helping students (re)think of themselves as scientists
Employment
Jen Heemstra on 3 things faculty can do to prevent bullying
Share X
To send an e-mail to multiple recipients, separate e-mail addresses with a comma, semicolon, or both.
Title: Janice M. Hicks
Author: Andrea Widener
Chemical & Engineering News will not share your email address with any other person or company.

Comments
Robert Buntrock (August 28, 2014 4:50 PM)
As both a life-long member of a main-line protestant church and a scientist I congratulate Dr. Hicks on her new career path. I felt for some time that the two "magisteria" (a la Gould) are compatible and each side should no more about the other.
Reply »