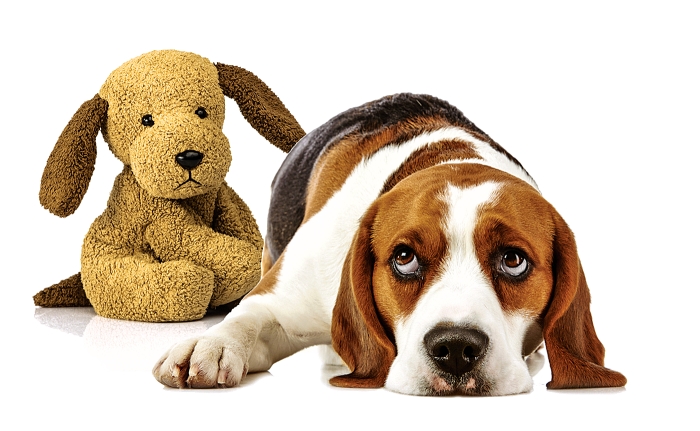 Dogs get jealous. This should seem obvious to anyone who has spent more than a few minutes with a dog. But as a pair of researchers recently noted, “Experimental evidence demonstrating behavioral indices of jealousy in dogs does not exist.”

To collect scientific evidence of dog jealousy, the University of California, San Diego, researchers recruited 36 dog owners and had them tease their pooches under controlled conditions (PLOS One 2014, DOI: 10.1371/journal.pone.0094597). The owners were given stuffed mechanical dogs and told to interact with them as they would a regular pooch. The researchers also handed out plastic jack-o’-lanterns, which they instructed the owners to treat like a regular dog as well.

The real dogs were more likely to exhibit jealous behaviors such as pushing or whining while the owner was interacting with the stuffed toy than with the jack-o’-lantern. A quarter of the dogs took things as far as snapping at the objects, a curious result because the study excluded, for safety reasons, dogs with a reputation for aggression.

What could be worse than having a hungry tyrannosaur chasing you? Three tyrannosaurs, all bearing down on your tail at the same time. 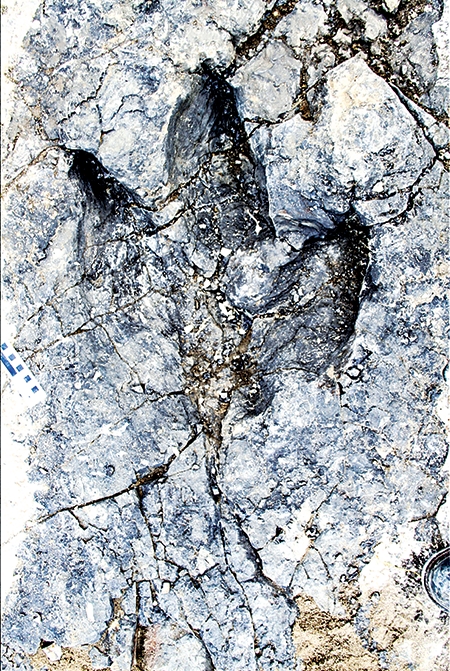 Credit: PLOS One
Big foot: Analysis of dinosaur tracks suggests tyrannosaurs may have traveled in groups.

A study published by a team of Canadian and U.S. paleontologists, who analyzed dinosaur tracks recently found in British Columbia, paints such a picture (PLOS One 2014, DOI: 10.1371/journal.pone.0103613).

The tracks went undiscovered for more than 50 million years, until a local guide happened upon them in 2011. It was quite a find.

Individual tyrannosaur footprints are rare, and no one has ever found a full set of tracks. The newly discovered tracks, though, belong to not just one, but three tyrannosaurs. Because all the tracks are of similar depth and preserved in clay in the same way, the authors of the study concluded they were made by three tyrannosaurs moving together in the same direction.

The team was able to estimate the ages of the tyrannosaurs at approximately 25, 26, and 29 years old, which puts them comfortably in adulthood. And using a probable tyrannosaur height at the hip—2.30 to 2.87 meters—and the length of the stride indicated by the tracks, the scientists were able to determine that the dinosaurs were traveling at 6.4 to 8.5 km per hour, a leisurely stroll as far as tyrannosaurs go.

Like tyrannosaurs, prairie dogs are also sociable. Perhaps a little too much so. “Prairie dogs are increasingly rare and subject to bubonic plague,” says Jennifer Verdolin, a researcher with the National Evolutionary Synthesis Center in North Carolina.

Understanding the social networks they form, however, might help stem the spread of the Black Death among the affable rodents.

Amanda Traud, a Ph.D. candidate in biomathematics at North Carolina State University, analyzed data Verdolin collected from prairie dog colonies in Arizona (Ecol. Complex. 2014, DOI: 10.1016/j.ecocom.2014.06.003). The researchers focused on a behavior called “greet kissing,” in which prairie dogs lock teeth when they see each other. If the critters are from different social groups, the interaction typically ends in aggression.

Studying greet kissing pinpointed the prairie dogs, called bridge individuals, who more often than others scamper between social groups. The researchers suggest that conservationists might slow the plague down by relocating the bridge individuals.